PHP vs Python: Which Language to Choose for Server Side Development? 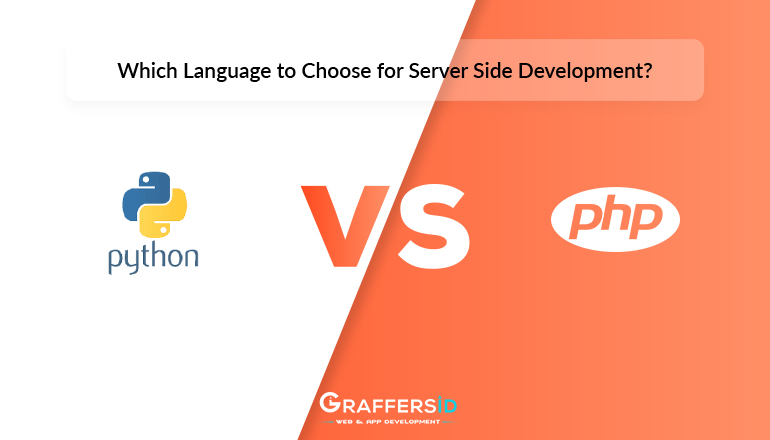 Python vs PHP, they both are widely used high-level programming languages. PHP is an open-source server-side scripting language, while Python is known for its dynamics, simplicity and availability. Despite being equally popular among developers, these two languages also have several differences. The wide prevalence of both languages leads to one question-which language to be chosen for server-side development.

To get the right to this question, it is important to consider the features, scope and functionality of Python and PHP in software development. It is also important to understand the main differences between Python vs PHP.

In this article, we strive to explain the differences and similarities between the two languages i.e. Python vs PHP.

Developed in 1994, PHP or Hypertext Preprocessor is an open-source server-side scripting language. Developed by Rasmus Lerdorf, PHP was created as several components and extensions that extended the capabilities of widely used C language. With the constant use and extension of PHP, and the emergence of community, the new language soon becomes a widely used language for backend development.

Over 80% of modern websites are based on PHP today. If you want to hire PHP Developers from India, Consult GraffersID, a leading IT Staff Augmentation Company.

PHP is evolving constantly and complemented by the developer team and members of a large user community. PHP is in peak and it would be wrong to say that there is any decline in the popularity of the language.

Developed by Guido van Rossum in 1989 as the replacement of the ABC language, Python is five years older than its competitor. Python gained popularity around the year 2000 after the release of Python 2.0, whose one of the main features was complete Unicode support.

Python was engineered as a full-stack programming language, since the initial days. That’s the reason why it is not popular on the web- today less than 1% of websites are created and managed using Python.

Python vs PHP: What is Common?

Here are the common properties between Python and PHP:

Python vs PHP: What are the Differences?

When choosing a language for development, its features are the first thing that should be considered.

Thus, Python developer creates separate functional modules and registers the connection between modules on an “if-then” basis. This results in an algorithm that program blocks based on the action of users.

While on the other hand, working with PHP means creating an integral object that comprises certain properties and executes certain actions based on the user input.

Know why Outsourcing Software Development India is a success

PHP’s syntax is quite similar to the syntax of C. When writing code using PHP, curly brackets, operators, additional characters, and other C elements are used. An unpleasant feature of PHP is it is incompatible for namespace conventions, which is why developers do not perceive PHP as a full-fledged programming language. However, this is mainly because the language was initially designed for website management.

On the contrary, the syntax of Python is based on the separation of the code with tabs and spaces, which considerably speeds up the process of coding, however, increases the possibility of careless errors. Python comes with the benefit of simplicity of commands, most of the commands in Python are similar to corresponding words in English, which makes it easier to learn Python.

Here are some secondary differences between PHP vs Python:

Know the difference between Python vs Java

PHP vs Python: What to Choose?

Despite the number of differences between these tools, such as syntax, application and logic, these languages also have several common properties.

They have many useful libraries, convenient, easy to use, detailed documentation and broad communities. However, to choose the right technology between the two depends completely on your development project.

To create simple sites and web applications, as the experience of developers suggests, PHP is the best option. However, Python is your go-to option when it comes to the development of complex flexible products.

Moreover, while choosing a language for mobile development, keep in mind that Python is not limited to web development capabilities, which makes Python more versatile and convenient than PHP.

All the major mobile platforms such as Android, iOS and Windows Mobile have some kind of Python framework that helps in the native applications.

Owning to its logic and regulations, PHP is better for web development projects. Although there are ways to build a server-side backend for mobile applications using PHP, however, it is quite harder as compared to Python.

In a nutshell, the choice between PHP and Python lies in flexibility, stiffness, versatility and nativity. The final choice of the language is dependent on the assigned task and skills of the developer.

We hope through this article you can better understand the main properties of these two popular languages. Still in doubt, which languages would make the best choice; get in touch with skilled PHP and Python developers at GraffersID, a leading IT Staff Augmentation Company.