Python vs Java: Which Language to Choose for App Development? 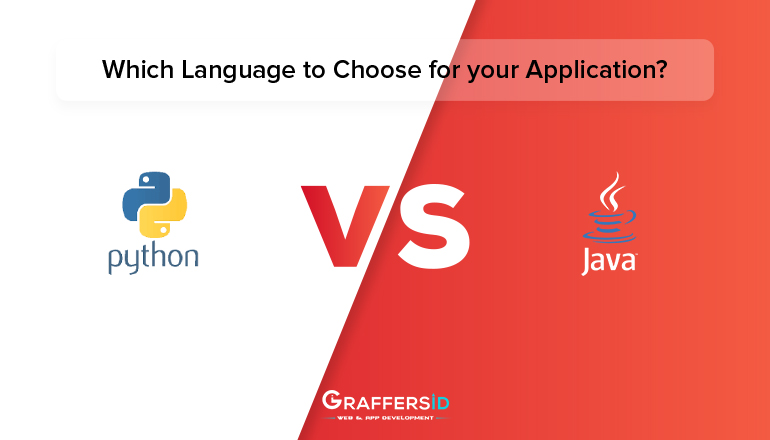 Python vs Java? Which one wins the bet?

Read the article to discover the individual significance each language holds and what language you need to choose.

In an era where every service comes with a need for app development, it’s pretty hard to select the right programming language for your needs. In fact, tech giants like Google, Instagram, and Netflix still use Java and Python for app development.

Regardless to say, both languages are highly efficient and help build stunning apps with interactive interfaces and add-on features. Both, Python and Java for app development are relatively standard for web APIs, data science, machine learning, app development, artificial intelligence, and more. But, one thing that is the most challenging is choosing the best language for app development.

To be straightforward, Python is a high-level, object-oriented programming language that uses dynamic semantics similar to the English language. It comes with features like built-in data structures, dynamic binding and dynamic semantics. Acting as a popular choice for Rapid Application Development (RAD), Python is simple, offers a reduced cost of programming maintenance and comes with features like easy-to-learn syntax for better readability.

Here’s what you need to know about the language:

Here’s why Python is the best language for app development:

While Python comes with a number of benefits, there are still several drawbacks one can not deny. Here are some of the demerits of using Python:

Like Python, Java is a class-based, general-purpose, object-oriented programming language, mainly famous for having fewer implementation dependencies. Commonly used for developing applications in laptops, gaming consoles, scientific supercomputers, cell phones, and data centers, Java is secure, fast, and reliable, making it one of the best languages for app development.

Here’s what you need to know about Java:

Here’s why Java is the best language for app development:

Here are the main disadvantages of using Java:

To find out more about which language is best for app development, here is a descriptive analysis of both languages.

Python vs Java, are extensively used as general-purpose programming languages. According to the latest TIOBE Programming Community Index, Java is more popular amongst developers.

At present, developers use Java and Python for developing a wide variety of desktop and web applications.  Both programming languages are widely used for data science and machine learning.

However, unlike Python, Java is one of the two official programming languages for Android. Java was designed to help dedicated java developers in building software applications that can be implemented with minimal dependencies.  Whereas Python is the only programming language with a design philosophy that emphasized code readability.

Hence, it is essential for programmers to understand the main differences between Python vs Java.

In contrast to this, Java is a compiled programming language. Java code is initially compiled into bytecode that runs on any platform with Java Virtual Machine. The developers can port the compiled Java code from one platform to another seamlessly.

One of the most important differences between Java vs Python is that Java is statically typed whereas Python is dynamically typed. This means that in Python, it is not necessary to write declare the type of a variable when writing code. Python is known for being short and readable. It allows the developer to do some things with just a few lines of code.

Being dynamically typed and concise, it is easy to develop applications in Python swiftly than in Java. People claim that the developer can be up to 10 times more productive while writing code in Python. Despite this, Java is less prone to bugs than Python owing to its static type system.

Python and Java, both the language, offer an efficiency boost with a wide variety of web development frameworks such as Spring and Django. This enables developers to quickly build everything whether it is a small web app or a high traffic application.

Java has compiled language whereas Python is interpreted. This means that if speed is what you want from your project, then neither of the languages stands to fulfill your goal. However, Java has the edge in most environments.

But, speed is a relative factor. If Python’s speed makes it an undesirable language, the other benefits, such as the rapid development process can outweigh this negative point.

It is important to note here that it is possible to achieve C-like performance with the use of Cython, a popularly used superset of Python for machine learning algorithms.

Python and Java, both are open-source language with a large, vibrant community which contribute to the languages and offer huge support.

Both languages come with an extensive array of libraries, which are supported by a large number of skilled developers. If you are not able to do something within the language itself, you will surely find a library for it.

Read Also: PHP or Python: Which Language to Choose for Server Side Development?

How to find the best language for your application?

While Python and Java share many similarities and have a diverse range of uses, it would be wrong to say that they suit equally for any type of project. In addition to comparing the general pros and cons of each language, it is also important to consider the specific needs of your application to make sure you choose the best language.

Python is a highly preferred language when the speed of development and budget are primary concerns to your project. Python is dynamically typed, and along with this, it also has concise code and a myriad of frameworks available which aids in building and deploying the application in record time. Apart from this, it also has the benefit of lowering development costs.

This is particularly valuable when you want to release an app under the MVP model or build and test prototypes.

One of the major drawbacks of Python is that it is not native to the mobile environment. Neither of the major mobile platforms, such as Android and iOS, supports Python as an official programming language. No doubt, an application can be developed in Python; however, it will require more effort on the part of the developer to deliver a rich user experience.

Java, on the other hand, is one of the preferred languages, when it comes to Android app development.

For developing applications, which is needed to be highly secure, Java is a preferred language. Although an experienced and skilled programmer can develop a very secure app in Python, Java is widely used for banking and other such web applications due to its strength in security and functionality.

Java includes access to security features such as access control, advanced authentication and cryptography that keeps your web application is secure.

A combination of highly powerful specialized libraries and flexibility means that Python is the way to go when it comes to a project that is biased towards deep learning, machine learning, data science, and image recognition.

Python and Java are two highly popular programming language which is similar in many ways. However, that does not mean that both equal suits for every project. Weigh the pros and cons of each language, match its strength, then select the best language for your app.

Python stands out when it comes to developer productivity as it enables the rapid development of applications. Java has the edge when it comes to speed. And, both languages benefit from active and supportive developer communities, as well as a huge array of libraries.

In terms of ideal use cases, Java is better suited for mobile app development, being one of the preferred programming languages for Android. It is a highly regarded language for banking applications where security is a major concern.

Python is perfect for projects where budget and speed of development are major concerns. It is best suited for applications that are built and deployed under the MVP model.

Q: What are the main differences between Java and Python?

A: Java and Python are both popular programming languages, but they have some key differences. Java is a compiled language, which means that it is translated into machine code before it is executed. Python is an interpreted language, which means that it is executed line by line. Java is generally considered to be faster than Python, but Python is more flexible and easier to learn.

Q: Which one is better for beginners?

A: Python is often recommended for beginners because it has a more straightforward syntax and is easier to learn than Java. Python also has a large community and many resources available to help new programmers.

Q: Which one is better for web development?

A: Both Java and Python can be used for web development, but Python is often the preferred choice for web scraping, scripting, and building complex web applications. Java is often used for building enterprise web applications and for creating Android apps.

Q: Which one is better for data analysis and machine learning?

Q: Can Java and Python be used together?

A: Yes, Java and Python can be used together through a process called “Java-Python Interoperability.” This allows Java code to call Python code and vice versa.

Q: Which one has a bigger community and more resources?

Get in Touch With Us