Why Outsourcing Software Development to India is a Success? 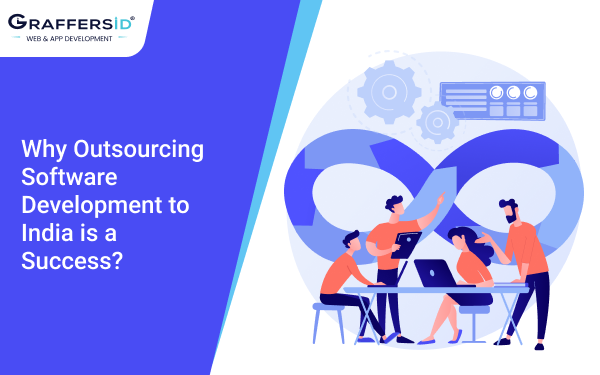 Have you ever wondered why global giants like Google and Microsoft are led by Indian personalities like Sundar Pichai and Satya Nadela? And, Why Outsourcing Software Development Projects or hiring offshore development Team in India is a Success? We will unravel the mystery right here.

No doubt, favorable government policies, and superior work ethic make India one of the preferred destinations for outsourcing. But, this is not all when it comes to outsourcing development to India or establishing an outsourcing team in India. The crucial reason why India is becoming the top choice for outsourcing software development is the availability of resources in abundance.

Why India the preferred destination for outsourcing software development?

India’s market share in the global services outsourcing industry is 56% which is the highest in the world. The present revenue of the Indian IT industry is above $150 billion, and it aims to touch a gigantic $350 Billion in revenue by 2025. Also, India still leads in terms of software developer base and has the fastest-growing concentration of software developers in the world.

The above stats make it obvious as to why India is the preferred choice for outsourcing your projects.

Now let us understand this in detail with simple points as to why India is a preferred outsourcing destination and what makes India stand out globally.

It would not be wrong to say that IT engineers and India go hand in hand. Around 0.5 million software graduates are employed by India-based IT companies every year which results in 98% young and skilled developers in the age bracket of 18-35.With such an enormous size of talent pool catering the software development requirements become easy.

Hiring resources from India not only resolve your software development issues but also reduce the project management burden from your shoulder. Top outsourcing companies in India have project managers who hold hands-on experience in dealing with end-to-end design development and offering the clients with QA testing.

When you sign up with India for your software development projects you are in for a complete 360-degree experience.

Software development cost is cheapest in India as compared to other global countries. This is a well-established fact for many years but the cheap price does not mean any compromise on quality. What’s interesting here is that in recent years the cost to quality ratio stands in equilibrium.

So exactly how much does it cost?

Hourly Rate quoted by a top outsourcing software development company in India start as low as 12 $ per hour.

Say, a React-based project requires at least three developers. Now let’s understand how this project can be managed in India on a low budget. Most companies in India will distribute the React project in a hierarchy of 1 senior developer, 1 junior developer, and 1 Intern. Since the wages In India are very low as compared to the US/Europe it becomes easier for companies to distribute the cost. Quality is not compromised as the most complex task is taken by the senior developer and the regular task which doesn’t require much expertise is distributed to the Junior Developer with the supervision of the project manager.

This cost reduction helps the companies to cut down the hiring and infrastructure cost as they don’t have to worry about all this while outsourcing software development to India.

India is the second-largest English-speaking country in the world second to only the United States, which gives you an idea about the language proficiency of the country. Right from kindergarten until the time a student graduate the medium of communication is strictly English in several schools and colleges of the country.

India was recently ranked second on English proficiency by the EF English Proficiency Index. Companies look for developers with fluent spoken and written English skills as the IT industry across the globe operates in one single language. Several companies already started choosing India as an outsourcing partner without facing communication challenges.

This kind of command and application over a foreign language in a country is truly remarkable, and that’s why over the years people have trusted India as a one-stop solution to global outsourcing problems, especially software development.

India has got a competitive advantage even when it comes to the location with countries that are looking to outsource software development projects. The time difference of :

As along with cost, time plays an important role and acts as a competitive advantage for companies working round the clock and wanting sync-ups and conference calls.

It is also advantageous for companies who are looking for both in-house as well as an offshore team to work together in such a situation time plays a vital role.

Want to Outsource software development to India? Consult us

When it comes to outsourcing IT projects, India has the upper hand with almost 70% of the revenue of the company coming from the export of IT services. This contributes to around 7.2 percentage of the country’s GDP.

If software development is not your competency and you want to thrive in the IT segment, then India is the best option to outsource your IT project. Hiring India will free your money, energy, and time, along with ensuring world-class development solutions at the same time.

Outsourcing web applications have helped many small companies in accomplishing major objective and achieving success. In addition to this, partnering with software outsourcing companies also opens up a new environment to upscale the business.