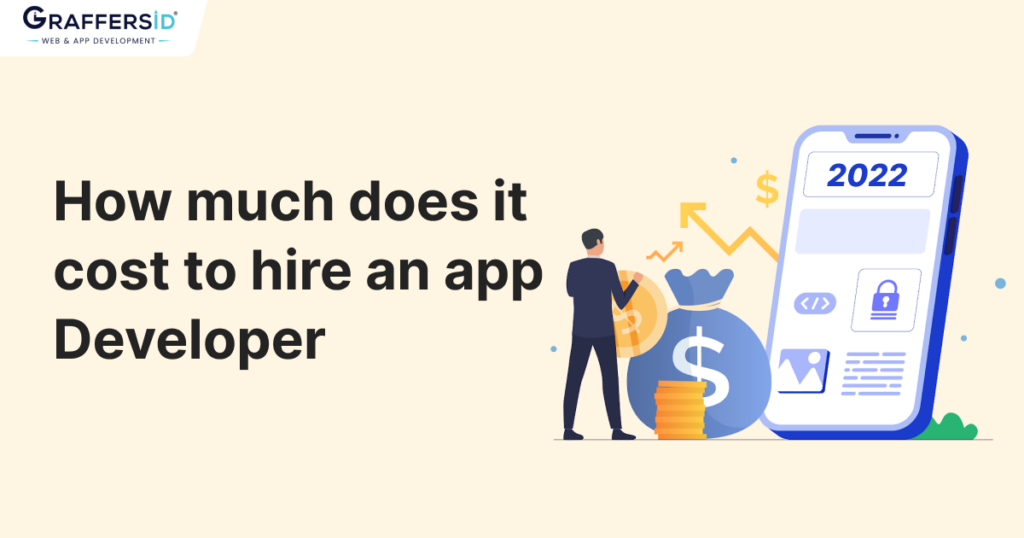 According to research conducted by Statista, global mobile app sales reached 318 billion US dollars in 2020 and is expected to grow to 613 billion by 2025. Isn’t it awestruck?

There are Millions of apps available on the app store as shown in the app store report by business of apps. Evidently, only a few out of a million survive, as they tend to stand out amongst the other apps.

We know it’s extremely important to focus on developing an interactive and intuitive Mobile app to stand out from the market and boost revenue.

The average cost of hiring an app developer starts from $10 and can go up to $110.

Does this imply that a $110 developer is best for you? Or should we perhaps go with hiring in between, that is, $70 per hour?

There’s no straight answer to this question. It entirely depends on the company’s requirements, and budget. What is extremely important is to have relevant market information to understand better and then hire a vetted remote developers. This is exactly what is covered in the article.

3 Steps to hire a dedicated and Vetted App developer? 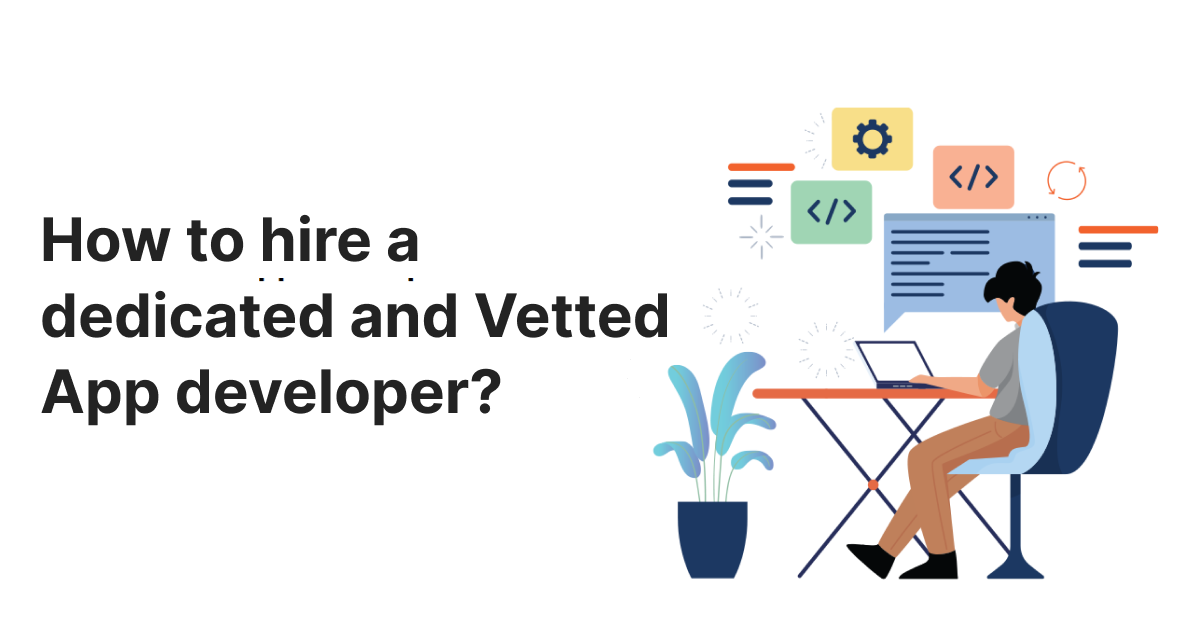 Let’s say you have come across a great app idea and you’re neither a tech geek nor someone familiar with programming languages and the tech industry. To get the answer, you might end up searching on Google for who can develop an app for me or how to get this app idea executed. Also you have discussed with your friends, family and known people to get your mobile app developed.

Fortunately, when you search for this, google will suggest tons of results offering number of app developers across the globe, but the next question might be who to select and how to know that this developer is best for me.

You can get a plethora of app developers with different skills sets, price ranges, and kinds.

Fortunately, there’s always a general thumb rule which you can consider when hiring app developers so that you don’t go wrong in any case.

Before you start with the quest to hire dedicated app developers, here are three general principles which you should consider:

The most important thing to remember is that if you don’t know enough about technology, it’s highly recommended that you learn some basics about technology, programming languages, target audiences, and platforms that you want to target for your app. Who would use your app, and how much would it cost to hire an app developer?

2. Go ahead with the experienced developers

Here is a comparison between In-house and Remote developer

It’s not necessary to look for a top-notch developer if the cost of hiring is going over budget. Instead, you can also hire vetted remote developers who have got decent experience and have a portfolio of their past work to show, or you can even ask for a few samples of their coding to get a glimpse of their past work.

3. Build relationship with them

Here are 5 Advantages and Challenges of Hiring Remote Developers

How much does it cost to develop an app?

There are tons of factors that affect the cost of developing an app, such as the app functionality and purpose, integration points, mobile platforms, types of features and technology, integration of visual objects, maintenance plan, and many more.

Factors affecting the cost of hiring an app developer? 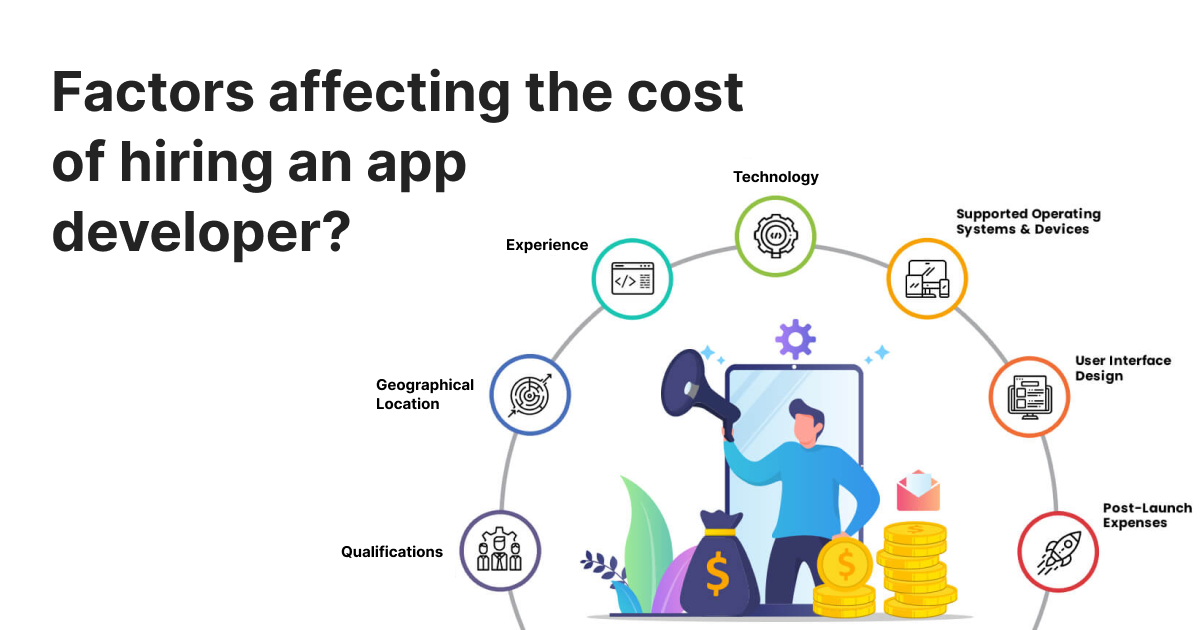 There are various factors that can affect the cost to hire an app developer:

Among other factors influencing the cost of hiring, location is one of the prime factors. Different geographical locations have different standards of living and labor market saturation.

For instance, hiring an app developer with 5 to 8 years of experience in the USA, Europe, UK is far more expensive than in other countries like India, China, Sri Lanka and others.

High standard of living, less availability of resources, and several other reasons affecting the cost of hiring developers in the USA.

Want to know Why Outsourcing Software Development to India is a Success?

Another significant factor that affects the cost is the technology stack. The IT market is vast and offers different programming languages and frameworks, making it more expensive.

We cannot discuss the iOS vs Android debate when discussing mobile app development costs per hour. Should you go with iOS, Android, or a Cross-Platform solution for your company, and how does this affect the cost?

According to research conducted by Statcounter, the number of Android apps is greater than the number of iOS apps due to the ease of publishing and flexibility. 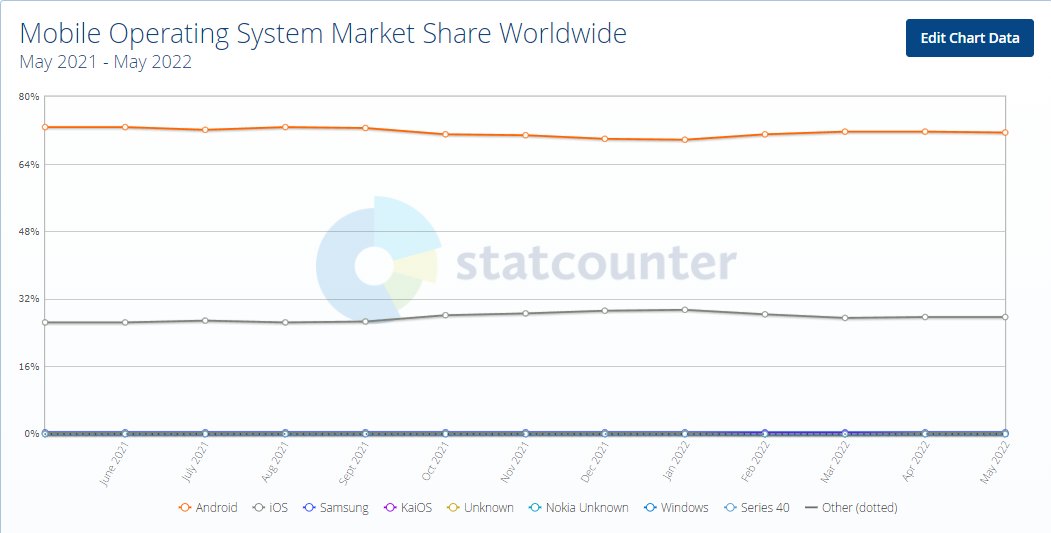 On the contrary, iOS apps have great UI/UX, performance, and are more popular in Western Europe and North America.

In addition, Android devices have different screen sizes and the programming language used to develop Android apps is Java, which is quite larger and more typical than Swift, which is used for developing apps on iOS platforms.

The time required to develop an app for the iOS platform isn’t much due to simplicity in coding and hence the cost for hiring developers per hour for android platform decreases.

Here are questions needed to be asked before hiring an iOS app developer?

As mentioned above, the cost of hiring does vary by locations, technology stack and market density.

The time required to develop an app for the iOS platform isn’t much due to the simplicity of coding and hence the cost of hiring a developer per hour for the Android platform decreases.

Let’s say, if you hire an iOS app developer from the US, the cost per hour charged by the developer would generally range between $50-$85, while if you hire the same from India, the cost of hiring the iOS developer per hour would be quite less, that is, $15-$30.

Here are 4 ways to prepare before reaching out to developer !!

On the other hand, when it comes to hiring an Android developer, the cost increases due to the increase in hours. The developer hired in the US will cost around $70-$110, while in India it will cost from $20-$40 per hour.

Generally, the idea of launching an app on cross-platform apps is feasible when you want to target both iOS and Android audiences. 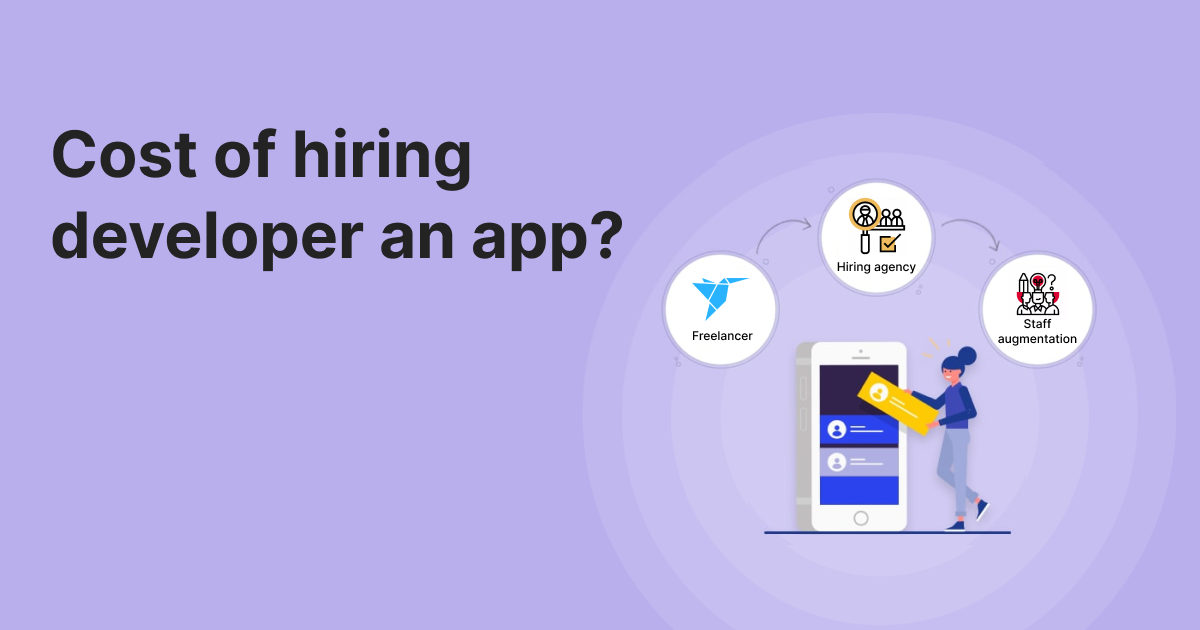 If you have a startup and want to hire developers, you can consider these three options.

If you’re tight on budget and are looking for affordable options to hire app developers, then hiring a freelancer is the best option.

The cost of hiring freelance developers in India starts at $15 and can extend up to $30.

Know How should startups hire their first Web Developer?

The recruitment agency will do everything from hiring the best candidates from the pool of teams to engaging in app development.

When hiring a recruitment agency, you will have to pay for the agency’s services on an hourly basis.

The only loophole in hiring recruiting agencies is that they might not have adequate technical expertise, which can be a drawback, especially if there’s no technical expert CEO.

Here is a detailed guide to hire ReactJS Developers From India

This model works well when you need services such as hiring and technical assistance. If you have a decent budget, you can easily hire a staff augmentation company to ease your work and provide hassle-free services.

Once you delegate the services to a reliable staff augmentation company, you will not have to put in any brain or do any leg work as you will get both technical assistance and a successful quest for developers.

The cost of working with an IT staff augmentation company varies based on the pricing policy.

We have a pool of top-notch developers to make your web and app development dreams come true.

Know the difference between Staff Augmentation vs Managed IT Services

Estimated cost to an hire app developer based on different geographical locations?

Undeniably, the cost of hiring developers in the US is quite expensive. On the other hand, Canada is a tad inexpensive.

Want to know the cost to hire WordPress developer

The cost of hiring app developers in Colombia ranges between $19 and $50 per hour. The average hourly rate is $30.

The cost of hiring app developers in Mexico ranges between $20 and $60 per hour. The average hourly rate is $35.

Know about how to hire offshore developer

In Germany the cost to hire an app developer is around $30-$60. The average cost of hiring on an hourly basis is $45.

When it comes to hiring developers on an hourly basis in Western Europe, Switzerland is a tad costly when compared to other countries in Europe.

Here is All You Need to Know About Offshore Development Centre

Southeast Asia has the lowest cost of hiring app developers in the world. In India, GraffersID is one such leading company which is renowned for providing top-notch dedicated developers for app and web development. The cost of hiring developers is $15 per hour.

A mobile app is a must-have for any business in 2022, so if you’re thinking about developing one, we strongly advise you to consider all the necessary parameters before hiring the developers.