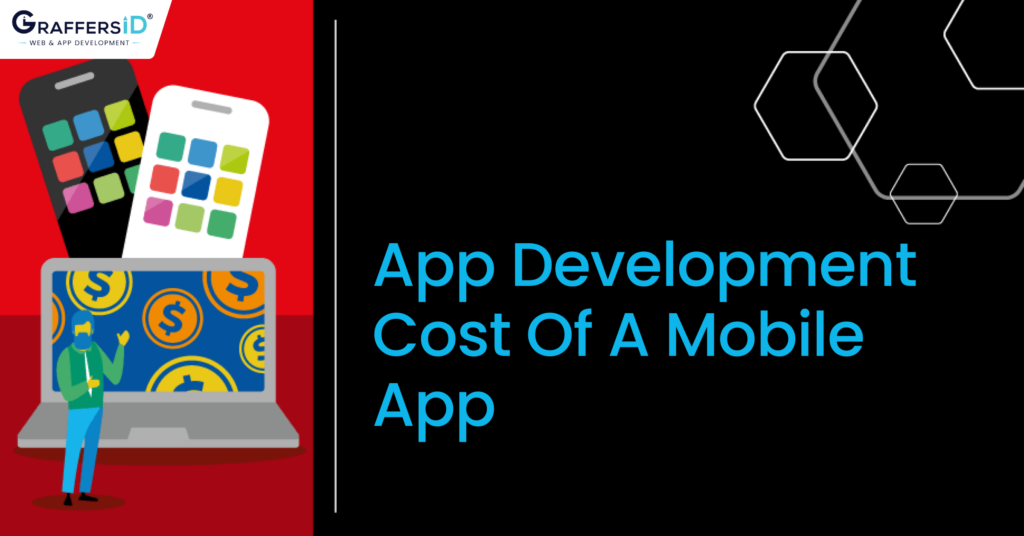 In this article, we are going to cover all the significant points that can clarify the pricing of making an app and the factors taken into consideration. We will help you build a budget-friendly and high-quality app.

There are mainly two questions that concern you- How much does it cost to build an app? What are the factors of pricing?

In brief, the affordable cost of making an app is dependent on the development and the hourly rate of hire developer which varies from $20 to $150 based on the region and complexity of your mobile app. The price may also vary based on the skillset, scope of work, and app type.

Comparatively, the cost to develop an app in the US is higher, based on the app type- 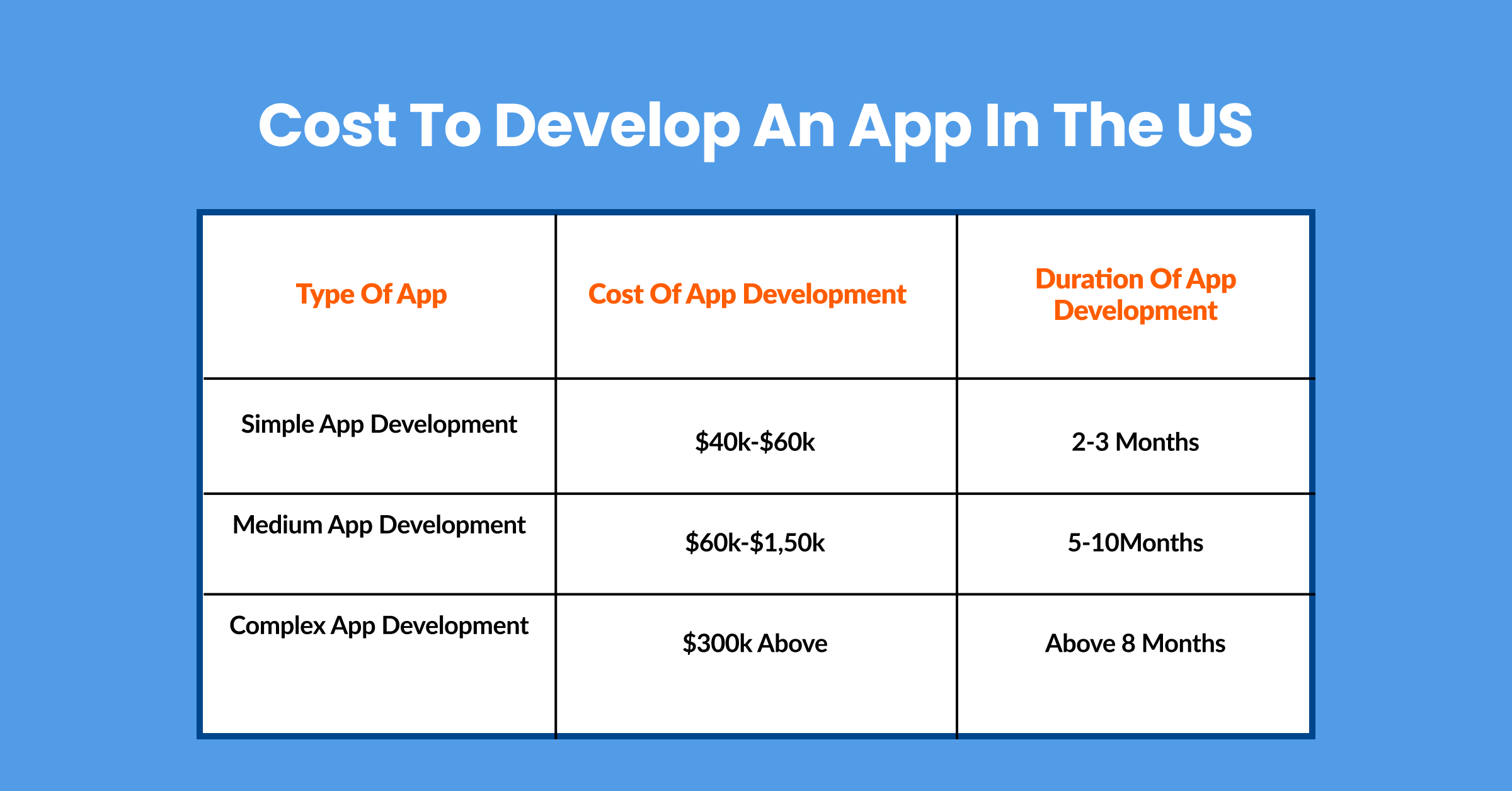 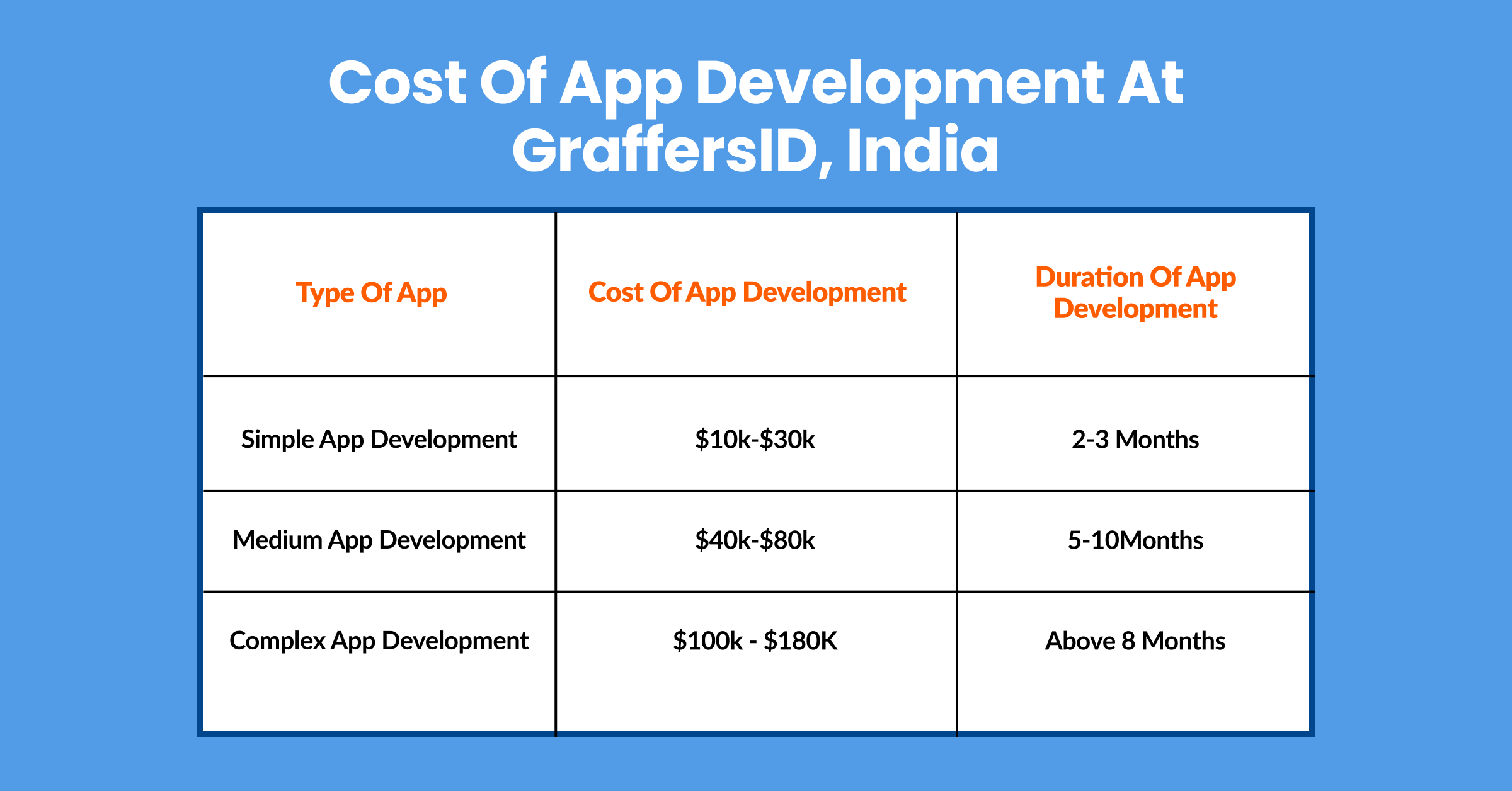 Based on the selection of your app type, now it is time for building an app. The entire App development process is complicated and each step includes a huge cost depending on a heap of variables. The procedure for developing an app includes-

Let me take you through the pricing structure of each step-

A) Research and Planning

In this phase, your app ideas start taking shape. You begin with planning different use cases, preparing detailed functional requirements of your app, and building a roadmap. Now for verifying your app idea and for market analysis, you need business analysts.

The cost of the research and planning phase in India takes around 2-3 weeks.

Listing out key factors that determine the app development budget-

Every app development budget is based on these three factors, now, it is on you to decide what is your application’s requirement. If you need to develop a high-quality app on a low budget then the timeframe should be an additional few weeks to your development schedule. The reason behind this is you need more time in advance designing your product. Similarly, if you go for a higher budget the development timeline can be 2-3 months only including offshore resources.

Now, let’s hop onto the basic pricing structure of designing an app-

B) Designing and Structure Of A Mobile App 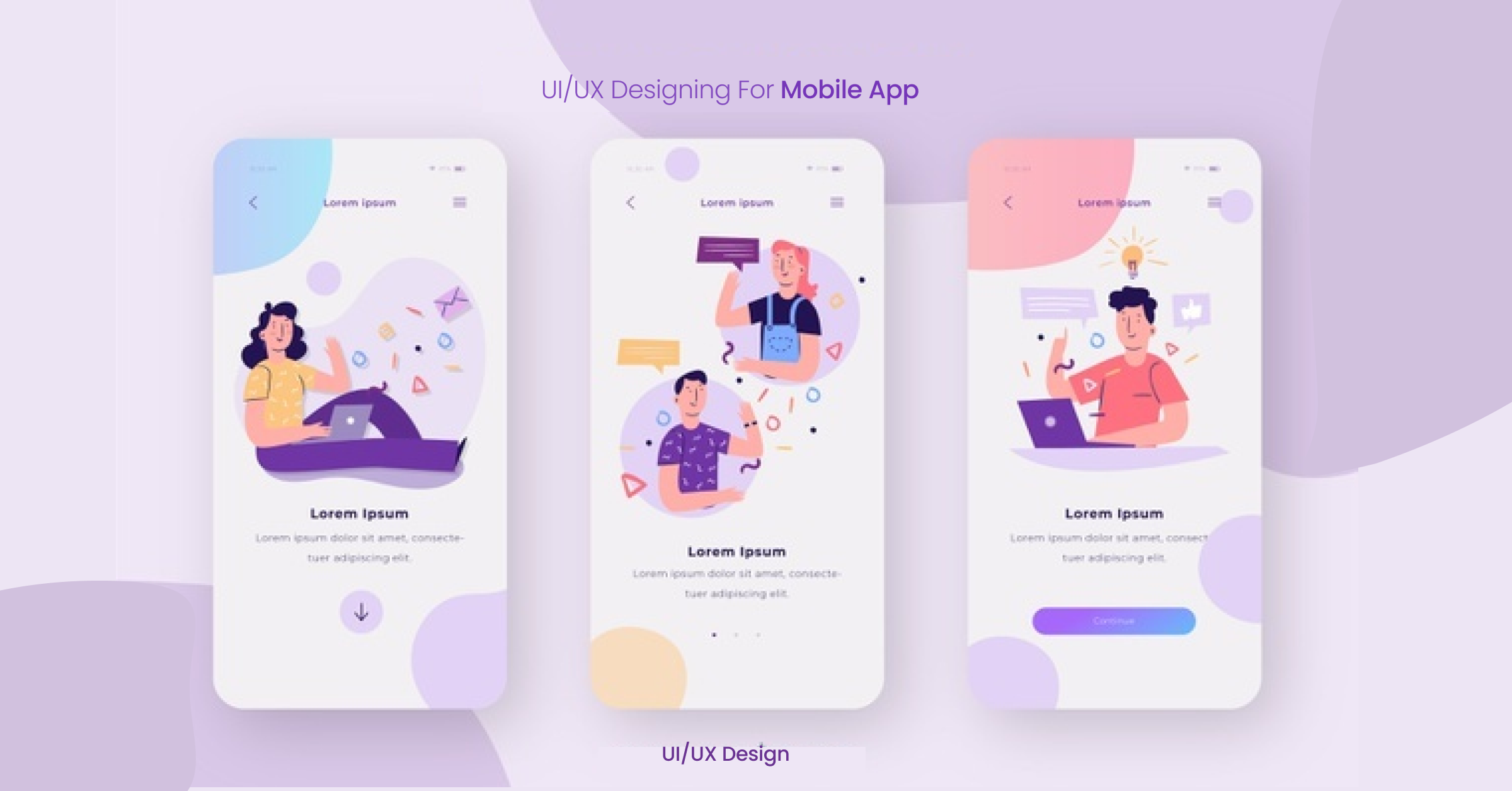 Designing an app is equally important as the development process. The inclusion of many attractive and important features and their functionalities leads to a higher cost in building an app. Mainly this phase includes Wireframes and developing Prototypes.

The overall budget of designing an app on a single platform in USA is around $70 – $150 per hour. On the other hand, If you outsource UI UX design to affordable countries like India can reduce you app development cost. The Average costing is around $15-$35 per hour. The overall time is taken to design an app can be 20 days and can vary accordingly.

Designing an app comprises four steps and each step requires a strategy to bring the app into a reality similar to the visualization.

UX is all about the user’s friendly use of an app. UX designers have to plan the idea following the user’s perspective. Thus, UX completely brings the screens into the paper for a better user experience. This procedure needs, understanding of the market, the goals of users’ utility of an app, who are the users.

For example, an app includes color psychology, button placements, designing solutions for the users. These tasks are performed by a UX designer and the cost of it fluctuates according to the requirement.

Designing an application requires creating mockups to get an idea of how the app will look like. Visually presenting what you have planned is a difficult task and to perform it requires more money. Visual designs include-
Layout, Typography, Colors, Screens, Shapes, and Elements.

Know in detail about difference between UI UX

Branding plays a vital role in marketing your product. If you develop an app, then it is evenly mandatory to market your brand. The branding for an app involves Marketing and Logo Branding.

Copywriting is a must to keep users engaged and interact with the application solutions you are providing. It includes text like- Newsletters, Landing pages, Technical documents, Blog Posts.
Now, if you hire a good writer, the cost of writing a copy changes accordingly. 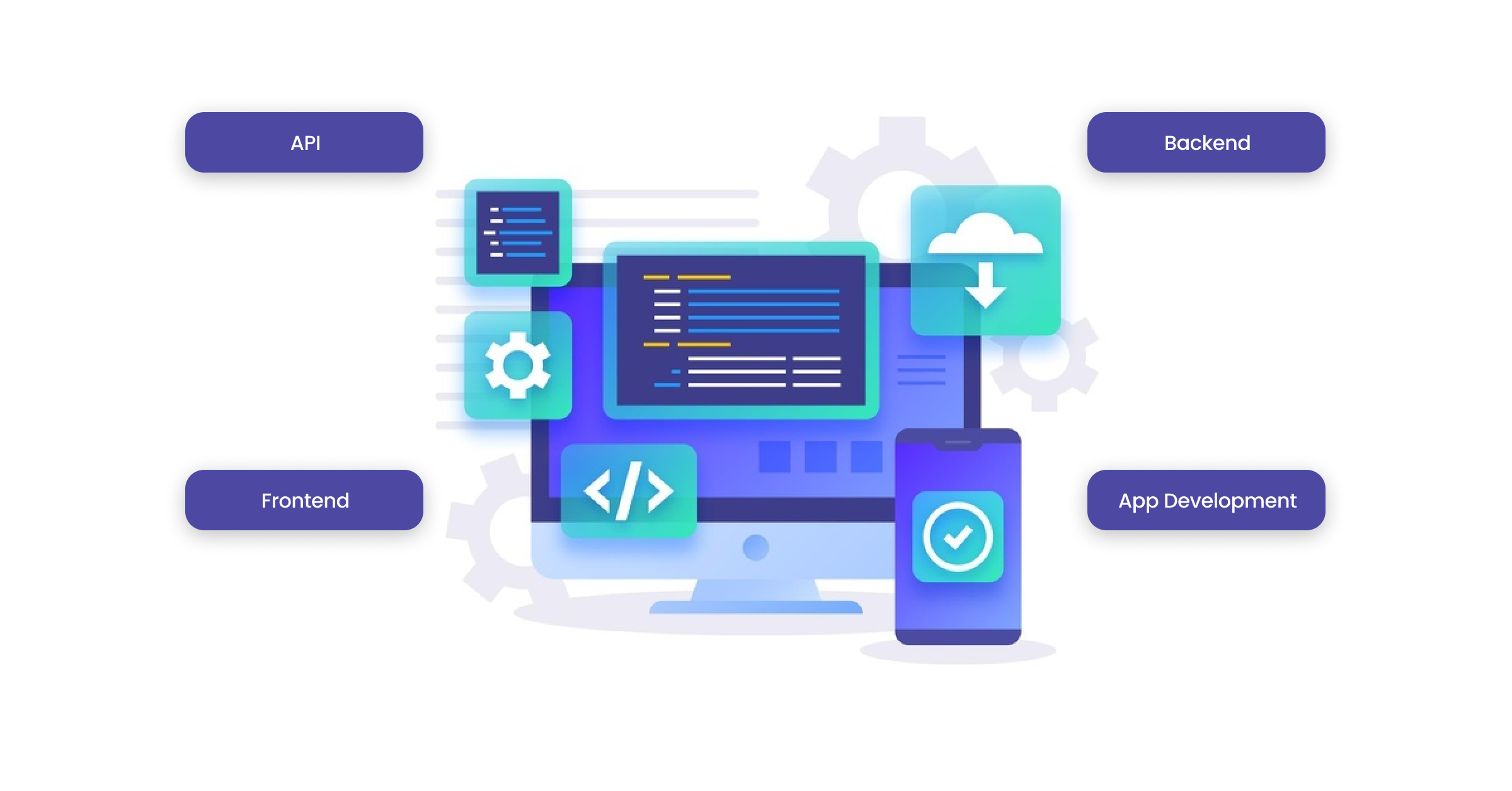 After the conceptual and detailed design of an app, we move on to the app development process. Developing an app consists of three important parts-

For supporting the functionality of an app, the server-side object and databases are required.

Through Application Programming Interface, the backend database/server and the app are connected.

It is cited as the application’s client-side. The front-end developers provide the structure, content, and behavior of an app to make it interactive.

The number of team members in the development team depends on the size of the application and the in-app features. 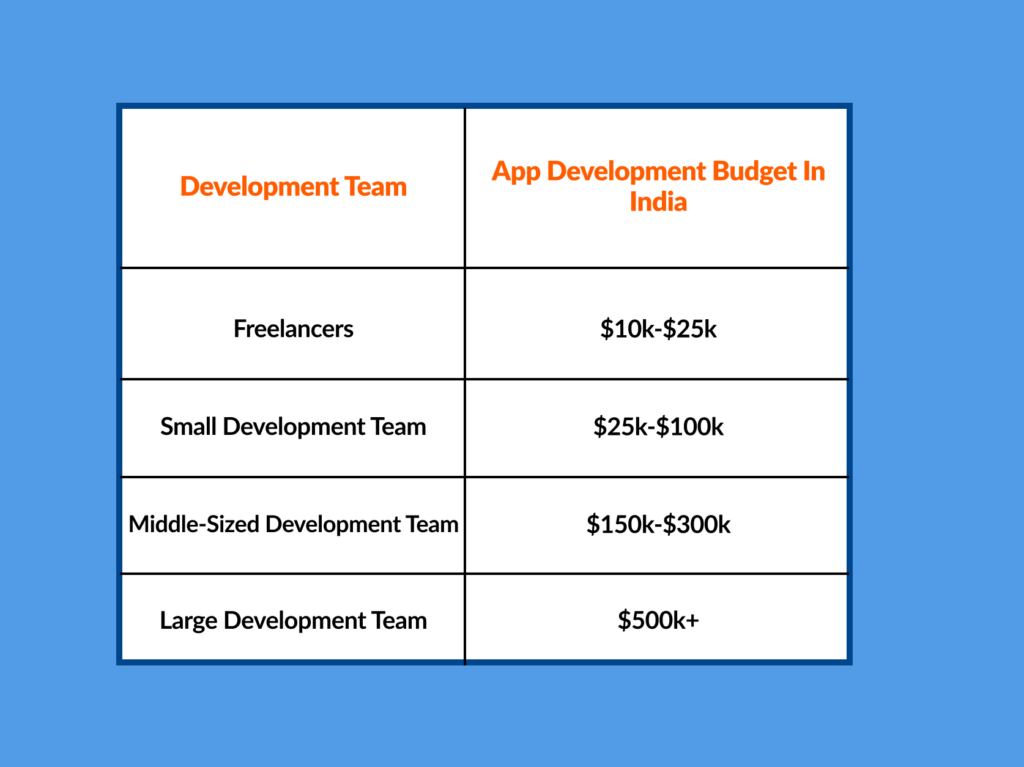 Now, the development process can be managed by a team of local developers or developers outside the country. To execute the plan you need brilliant developers.

Specific to Asia, India is the prime outsourcing country in Asia, known for delivering cost-effective and efficient subcontracting mobile app development services. Also, India was nominated as the second world country with the greatest number of graduates in science, technology, engineering, and mathematics.

The cost of living in India is significantly lower. In general, for the development of iOS and Android applications in India, the average hourly rate of developers extends to $20-$35 depending on the skills and experience.

To validate an app’s functionality and to make sure the application is secure and usable, testing is done. It requires a QA tester throughout the development process to make an application bug-free and to provide quality development. Overall development including coding, testing and deployment may take 25 days.

After your app has been launched, now it is ready for the users to use. To keep your app running in the eyes of users, you need to keep promoting your app and its features to the users. And, to do the same you have to follow the procedure-

Once your app is launched on app stores, you need to promote it on web stores too. Marketing and Promoting your app will redirect your users to their app stores. Besides, you can go for SEO marketing, promote your app through bloggers using promotion codes.

No app is perfect, but to make your app error-free you have your development team who will identify the defaults and get back to you with errors if found any. Every software needs maintenance and you have your team to help you with your app’s ongoing maintenance process that will further let you know the activeness of your app.

Specific to a location, costs for creating an app vary from region to region. It is dependent on the developers you are hiring from. Talking in general, the Hourly rate for programmers in developing an app in the US is 120$-150$ while in India the cost for the same is $20-$35, and similarly, in other countries, it differs accordingly. 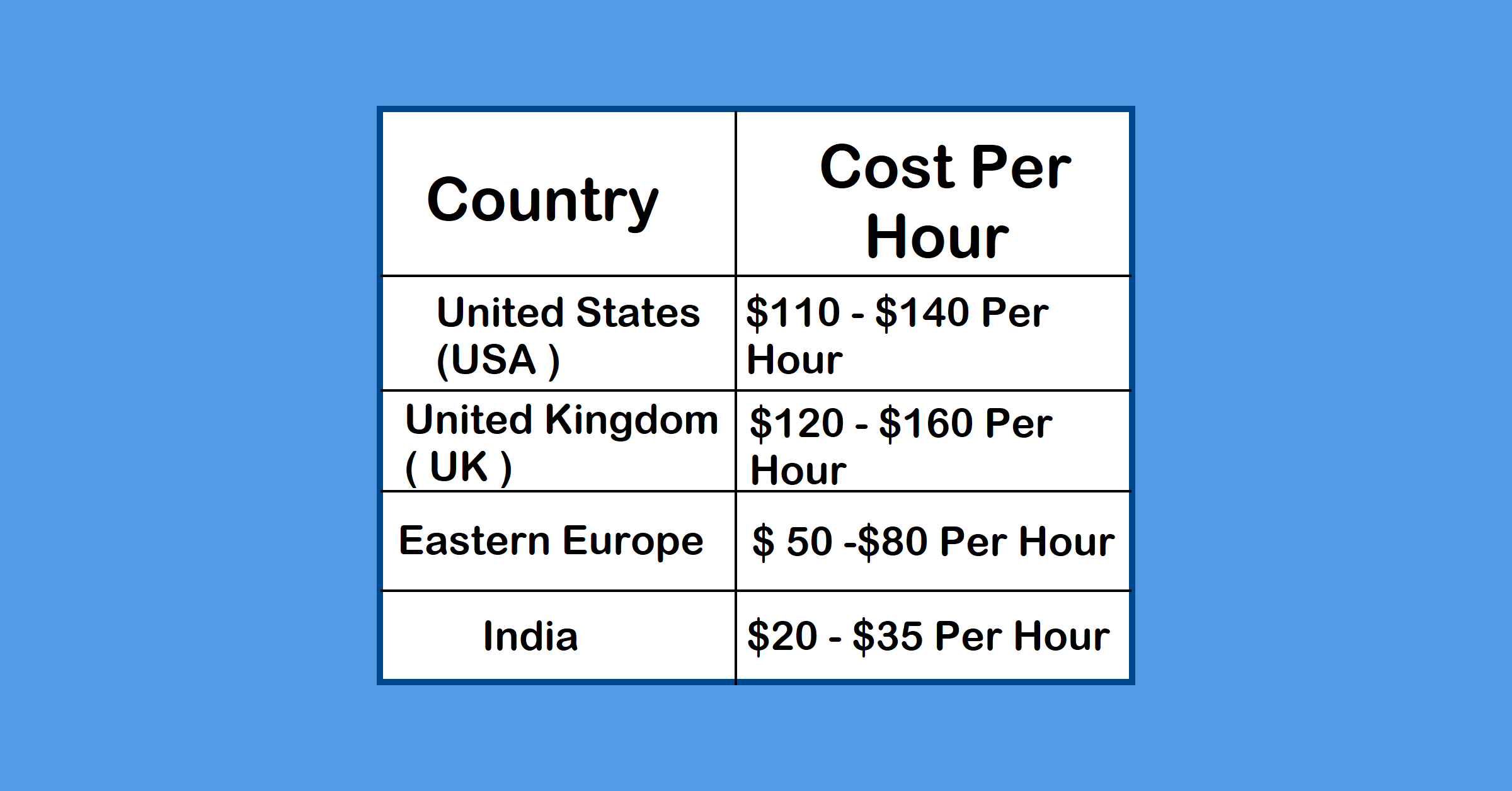 Now, other than the country from which programmers are hired, the cost depends on the hired developers programming languages like Java, Kotlin, PHP, and many more, the specialists involved who can be testers, business analysts, project managers, scrum master and last but not the least, the qualification or the requirement categorized into senior, middle and junior level.

App development is not as easy as it seems, it needs planning and research. You should be acknowledged for your target audience, your business goal, an understanding of the whole app development process, and the platform where your app is going to run.

To make an application engaging and unique, its physical features including screens, buttons, colors everything matters which take hold of the overall development cost.

The complexity of an app is dependent on the features and the technology used for the development.

Based on complexity, there are three types of app-

These include mobile applications having necessary features, a simpler outlook, new tech screens. Features of such apps are mainstream in every app-

Thus, the complexity level of simple apps is very low and so the cost and duration of the same are less. 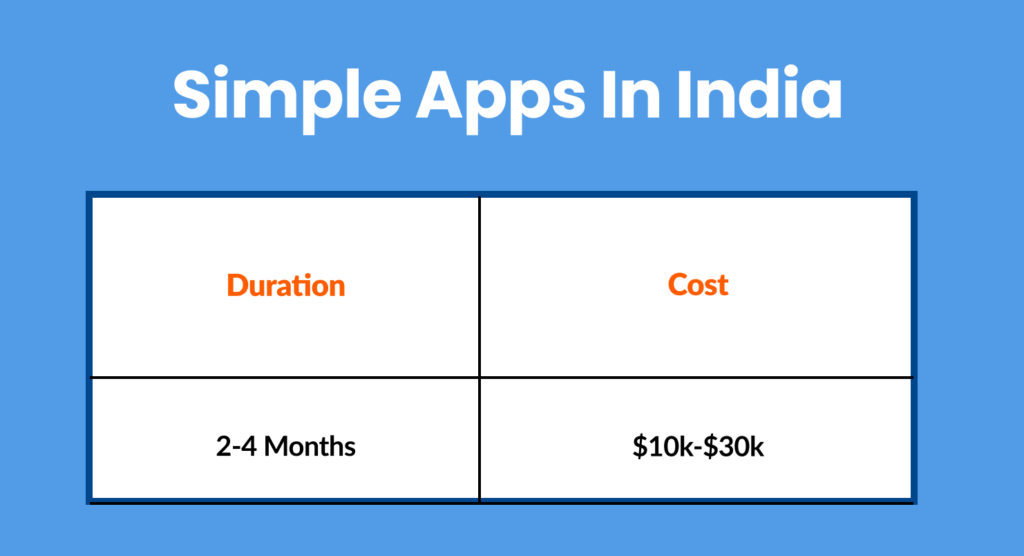 These apps include additional features, databases, and a higher-quality user interface. Features of such apps are highly complex-

Thus, the medium complex app has add-on features that affect the development cost and is higher than the simple apps. 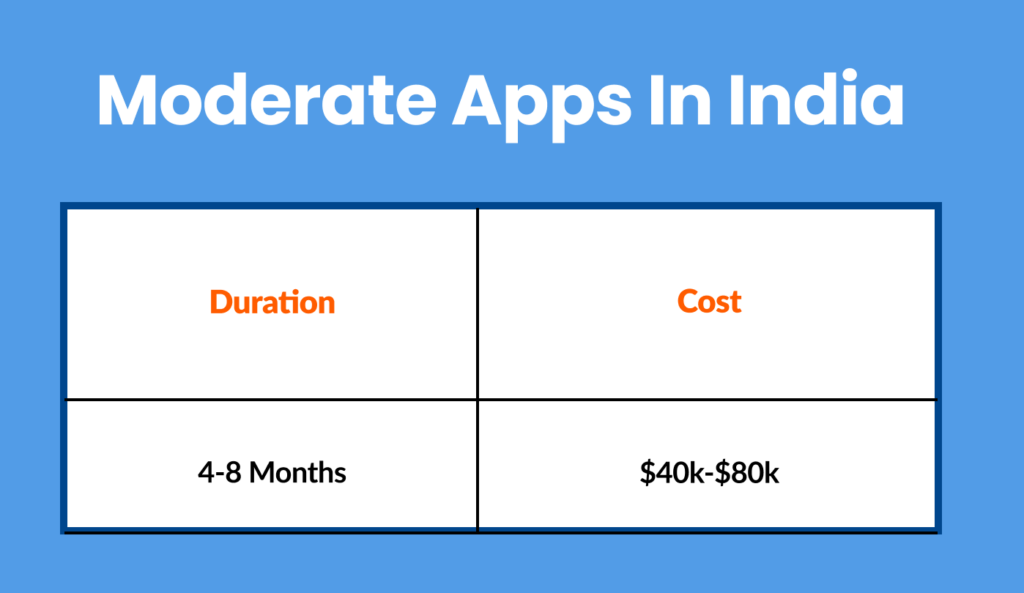 These apps have some high-end features along with integrations which leads to higher development costs. These apps are designed for bigger businesses.

Thus, a highly complex app not only requires a large number of members for development but planning and research are also a part of it. Such apps have several databases, servers, and highly complex infrastructure. 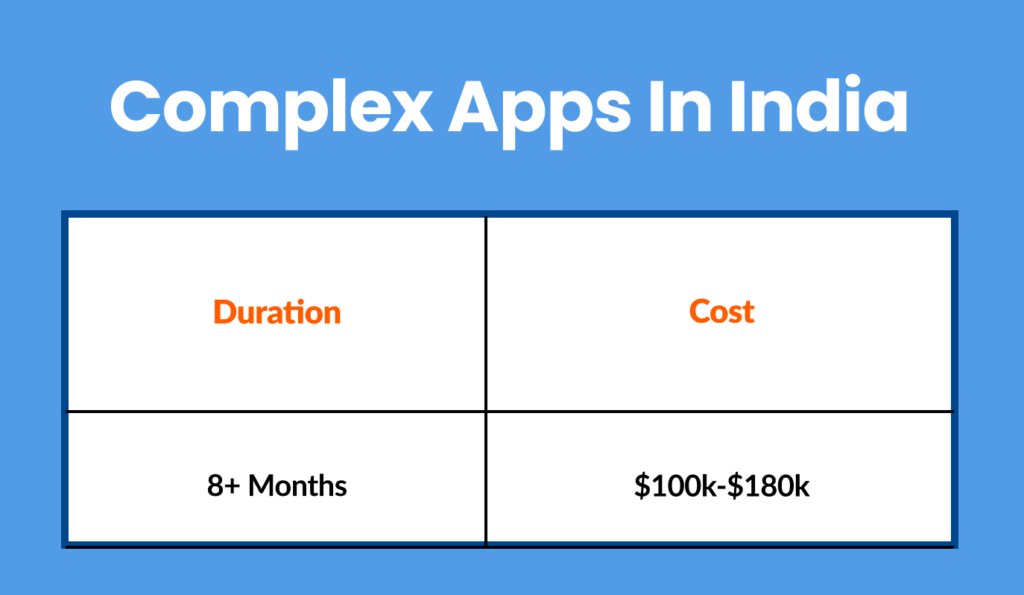 Another platform to run your app is a Hybrid platform where you can run your app on both iOS and Android.
Now the cost of developing an app on both platforms differs a lot. For native apps, the cost is higher than hybrid apps because you need two teams for developing the two apps concurrently. 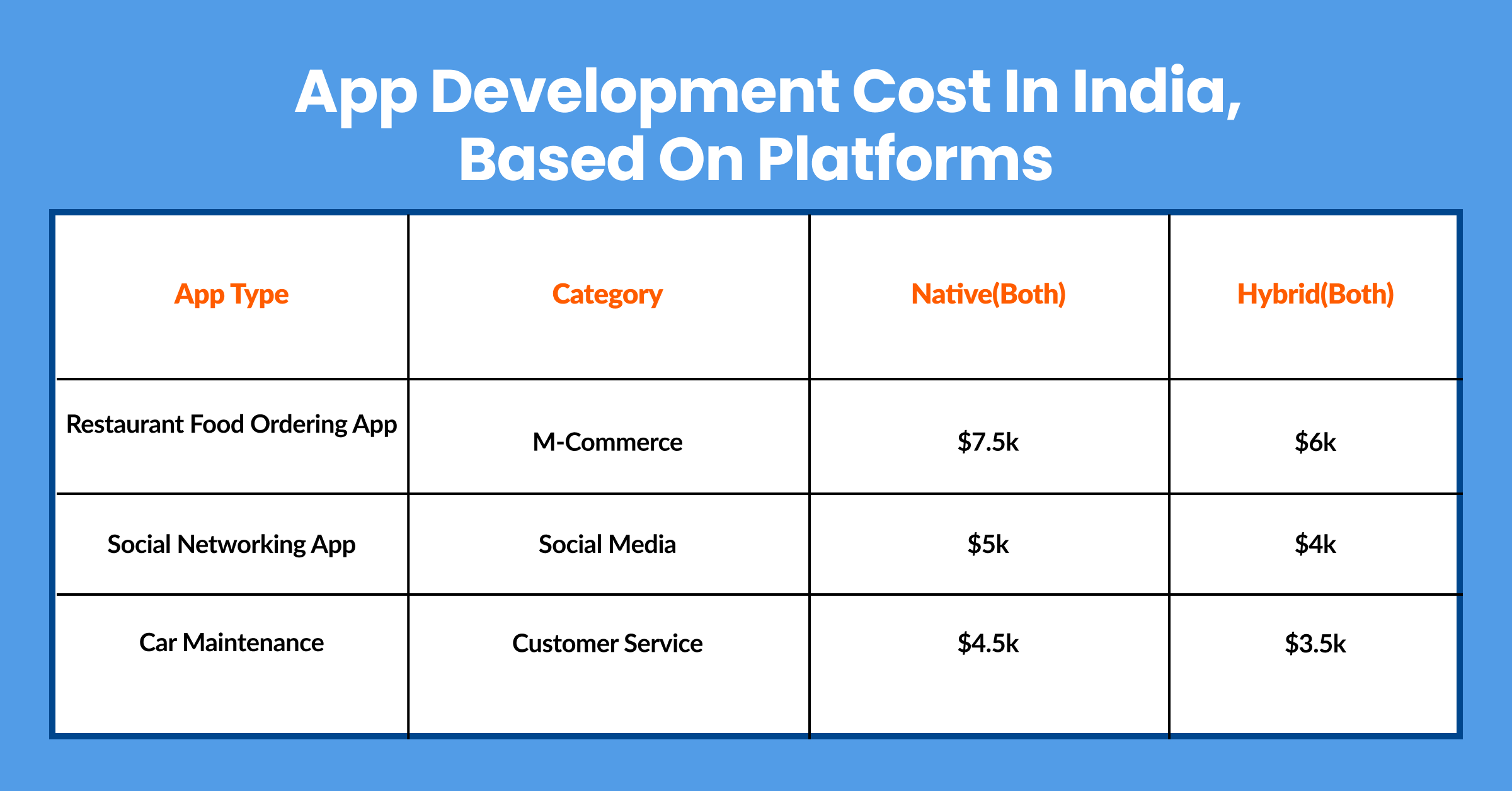 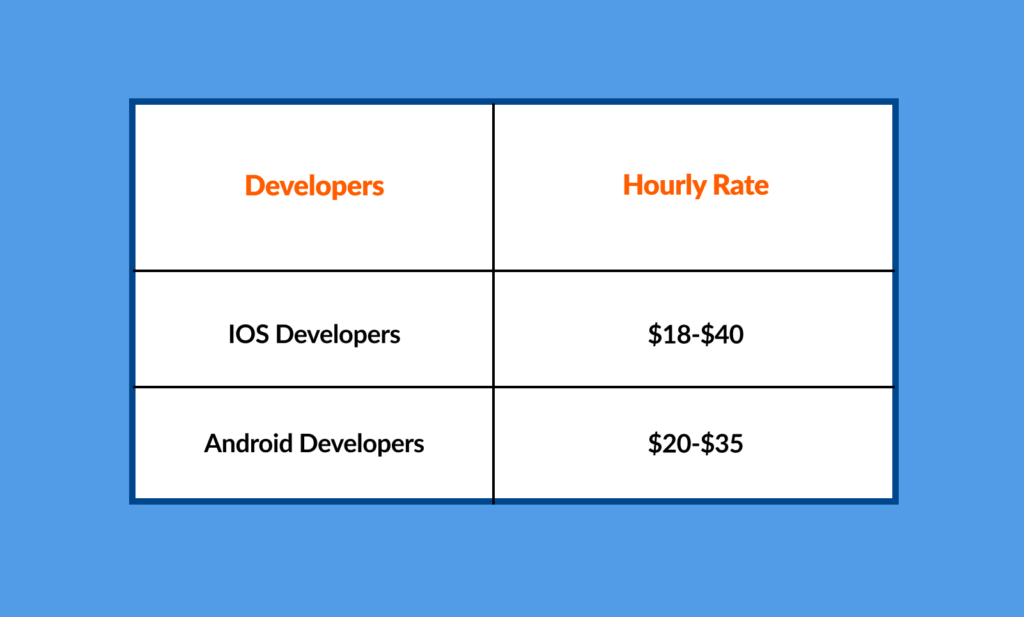 Eventually, catching sight of these factors you will have a clear understanding of your app development budgeting.