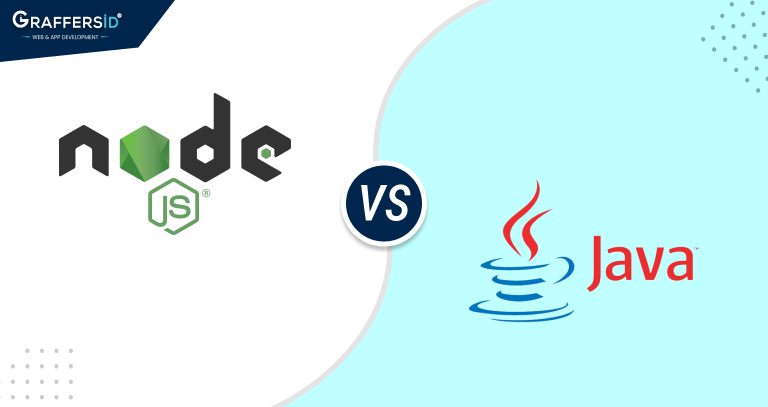 Nowadays, we often see people comparing multiple technologies over the internet just like Node JS Vs Java, whether it’s hardware or software. But why do we need to compare? Why do we want to distinguish between various programming languages, development frameworks, tools, or APIs?

The answer is straightforward. The first technology decision has a significant influence.

According to business owners, applying a specific technology affects a company’s product’s functionality and growth potential. Technology affects how readily a product is supported and how effortlessly a platform might transfer to another, which is essential to development teams. The choice to pursue a particular technology may have changed the course of a developer’s career.

Let’s take a look at the prime differences between Node.JS Vs Java to help you choose the best one for your project.

First of all, Node.js is a powerful open-source program. Ryan Dahl introduced Node.js as a server-side, JavaScript-based runtime environment in 2009. Contrary to what many sources say, it is neither a library nor a framework.

Node.js is based on Chrome V8. Therefore, in this situation, JavaScript calls are translated to machine code. Overall, the fundamental notion of this back-end platform is to execute JavaScript code outside of a browser. Two-way communication between the user’s browser and the server is what Node.js aims to achieve. With this approach, low latency and high throughput are accomplished.

Why do we call Node JS a Node?

Node uses the non-blocking paradigm where there is just one active thread. As a result, it only utilizes one CPU or core. Other cores may be employed to run databases or carry out other operations. Or Node can be running on the same system in several instances. These instances will have to communicate and make intricate calculations.

On various computers, several nodes may work together to do computation. It is therefore referred to as a “Node”, a component that helps in constructing a larger computing unit.

Want to hire remote Node.js developers: Get in touch with us here!

In any case, Java is regarded as the most popular and widely used computer language worldwide.

Node JS is a standalone command-line tool that excels at building responsive and scalable applications. The following factors influenced its acceptance by developers worldwide.

Java is a high-level programming language that excels in resolving general problems of any kind. Although new technologies are constantly emerging, Java offers many benefits over its competitors.

Difference Between Node.JS Vs Java 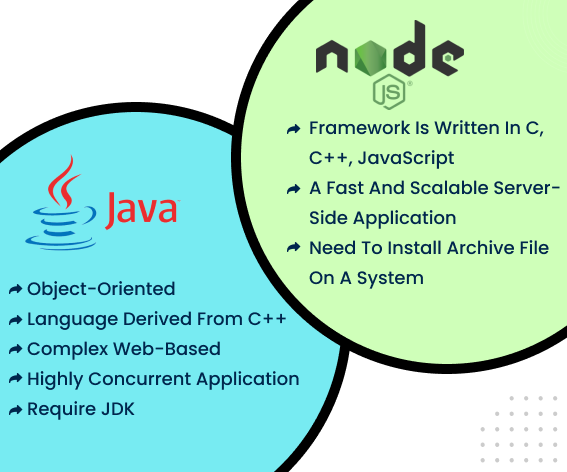 So, let’s compare Java vs Node.js, two of the most widely used technologies in recent years. What will be more helpful to use in developing apps in 2023? In the five most decisive categories, let’s go deep into the top advantages and disadvantages of Java and Node.js.

Let’s have a look at node.js vs Java performance. Java has excellent performance. But is it faster than Node.js? The answer is “no”. The leading cause is primarily due to the adoption of compilers. The trash collecting feature of Java is very well known, which could be both a benefit and a disadvantage. Node.js is a popular technology because it doesn’t require any buffering. It shortens the runtime by simply outputting data in parts. Therefore, it is evident that Node.js is the victor of this contest.

Java and Node.js developers are not way more expensive. Even though Java development is a little cheaper in the US, the product’s final cost is still influenced by other elements like project complexity, management, etc. Therefore, both technologies are the winners in this area.

Node.js is renowned for being flexible and quick to develop. The first technology, however, is the opposite of Node.js because Java is a stiff language and requires much more effort to develop (though Java may save time in the long term in some cases).

Java may take the lead in terms of stability in this area due to the object-oriented concepts and approaches that have been used for many years. But in the end, development and testing procedures play a significant role.

Highly scalable applications can be developed using both technologies. One of the two technologies is still recognized for producing better results in the mentioned domain. Since Java supports native multithreading and parallel processing, it is better in this situation. This offer is also available for Node.js apps but is less established.

Testing is unquestionably an essential aspect of the quality of any product. Java and Node.js both perform well in testing. With JavaScript, there are more ways to develop code, which also means more ways to test it. In the Java world, the coding and testing techniques are more unified.

Java and Node.js both have extensive documentation that is concise and easy to understand. As a result, users of Node.js and Java can use their data to explore the two platforms’ functionality fully. Both technologies are considered suitable in this category.

In this case, the image can look a little different. Some integrations might pose the greatest threat to Java. This demonstrates that the design of the programming language has little overall impact. There is no denying that Node.js has a severe security issue due to the absence of default error handling.

As mentioned, Java and Node.js are two of the most widely used technologies today. They both have substantial developer communities as a result. The Node.js community is growing, even though the Java community is older. As a result, both Java and Node.js have many experts with in-depth knowledge and expertise in their fields.

Some most famous Apps Use Node.js as a Backend Technology 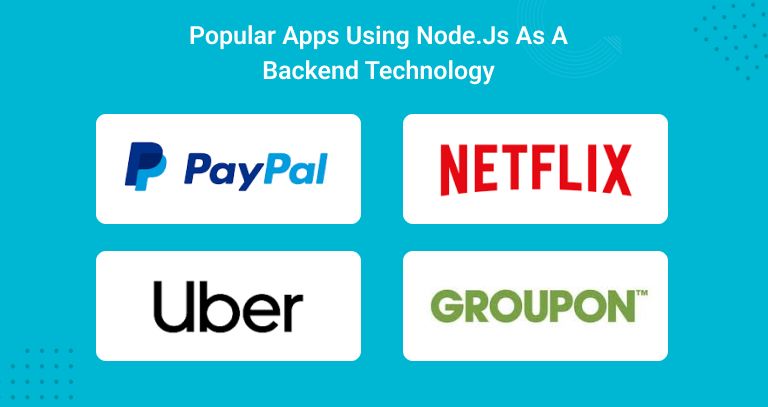 Some of the globally popular companies using Node.js for the back-end are NASA, Trello, LinkedIn, Uber, Twitter, eBay, and many others. 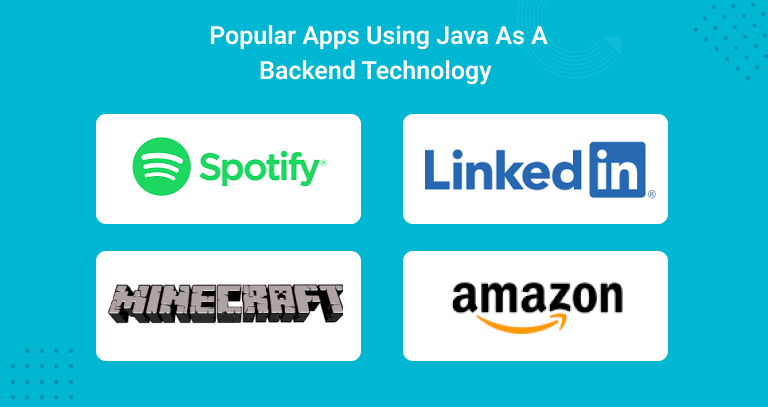 As one of the world’s most widely used programming languages, Java is renowned for having many products made with its technology.

Other Java-based applications include those from Amazon, Uber, Minecraft, Paypal, Netflix, and other companies.

Read Also: Django vs NodeJS: Which Is Better?


Why is node.js better than Java?

Node.js is well-liked for its competence as well as the scale and vitality of its open-source, javascript-based ecosystem. In addition, version compatibility is typically unaffected.

Is Node JS easy to learn for developers?

Node is ideally suited for creating software and applications that require synchronous, real-time interactions, such as chat applications and websites. However, it also has other uses and benefits that developers find appealing, increasing its attractiveness. If you’re interested in front-end or back-end development, think about learning Node.js.

Node is written in JavaScript. Nearly every developer is familiar with JavaScript, one of the most popular programming languages. As a result, learning Node takes less time and effort, even for novice JavaScript programmers.

Will Node.js still be helpful in 2023? Can Node.js replace Java? The answer is that Java and Node.js are excellent programming languages with distinctive features. They all have advantages and disadvantages that were considered carefully during development and will undoubtedly continue to be well-liked in the future. The adoption of Node.js by developers and the use of its applications in actual projects will determine whether Java is replaced or not.

Which Node JS version to use?

Always use the LTS versions with an even number “Recommended for Most Users” on the download page. Choose an actual number Node version when learning or deploying your project to a production environment. 14. x.x LTS, 16. x.x LTS, 18. x.x LTS, and so forth are some examples.

Why is Node JS popular?

Like many other technologies, Node.js has its proponents and its detractors. Nevertheless, regardless of your viewpoint on the matter, it is a powerhouse because it is extensively used by many powerful companies, including Uber, LinkedIn, and PayPal. When making business judgments, it’s also essential to consider the standard technologies used by reputable companies.

As we conclude our comparison between Node.js and Java, we can say that each language has pros and cons. Despite being a more established and ubiquitous language than Node.js, Java is also more complex. When comparing the performance of Node.js to Java, it can be said that Node.js’ single-threaded limitations are made up for by its speed and lightweight nature.

What are you waiting for? Let’s connect.