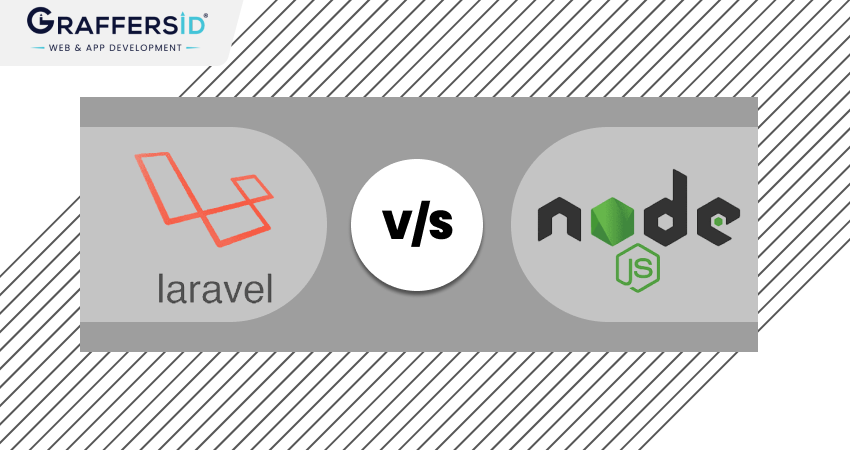 These web frameworks are designed to ease the web development process. They have in-built features and advanced functionalities that result in the smooth performance of web applications.

If you’re stuck and don’t know how to select the right backend technology, don’t worry, we have dismantled the Laravel vs NodeJS comparison.

In this article, you will dive deep into Laravel and NodeJS and the comparison of Laravel vs NodeJS based on their performance, scalability, testability, and many more.

Also, it offers an abundance of features that integrate the main components of the programming language Ruby on Rail and frameworks such as Yii and CodeIgniter.

According to Datanyze, Laravel holds more than 0.35% of the market share in web frameworks. This makes it an in-demand and popular PHP web framework that is preferably used by companies for developing web applications.

Furthermore, according to research conducted by Built With, more than 1 million websites have been built with Laravel, and the number of live websites is 7,833,345 and rising.

Here are some popular apps that have used Laravel as backend technology, such as Laracasts. It’s an e-learning website that provides various courses and is a great platform where you can raise technical queries and they will be addressed by technical experts.

If you want to build a software using Laravel, Consult GraffersID to hire vetted inhouse Laravel developers on contract basis.

Barchart is a financial portal that has gained the advantage of showing updated market data on current exchanges, stocks, gold prices, trade offers, and many more.

Asgard CMS is a modular, multilingual central management system that offers modules to use, such as media management, dashboard, and flexible backend support. 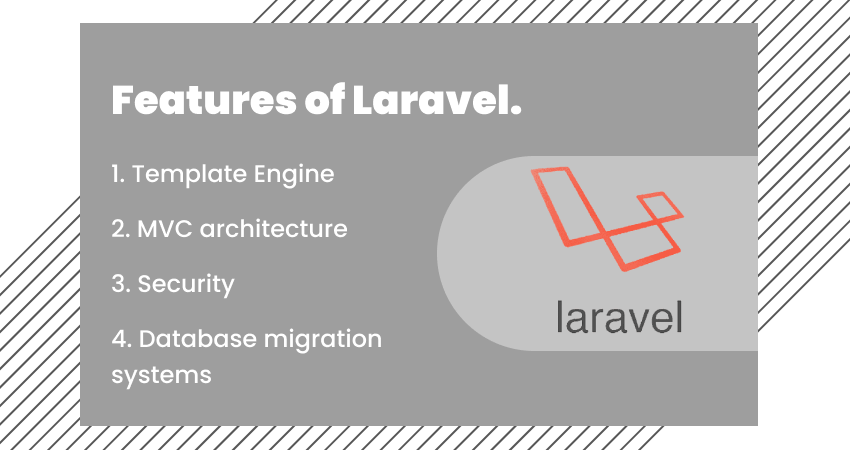 It provides awesome templates that provide amazing layouts. These templates are designed to create beautiful, simple and complex layouts.

It provides a stable structure comprising multiple widgets that are integrated with JS and CSS code.

Here one programmer works on the view while another will work on the controller to create business logic in the web application.

The MVC architecture pattern has a host of built-in features to provide protection and improve the performance of web applications.

Furthermore, it avoids code duplication by separating the business logic from presentation logic.

Every developer would want their application to be secured. While developing an application, the programmer has to take effective measures to ensure the safety and security of the application. In Laravel, it has in-built web application security which implies that it can effectively take care of its security by using Bcrypt Hashing Algorithm.

Its password can’t be stored in plain text as it already gets saved as an encrypted password in the database.

Know more about What is Laravel used for?

Its database migration system expands the database structure of web applications so that they don’t have to be recreated every time a code change happens.

It mitigates the possibility of data loss. You can easily alter the structure of the database, and it also enables you to use PHP code rather than SQL code.

Furthermore, the Laravel schema builder allows you to build tables for the database and can attach columns and indices. 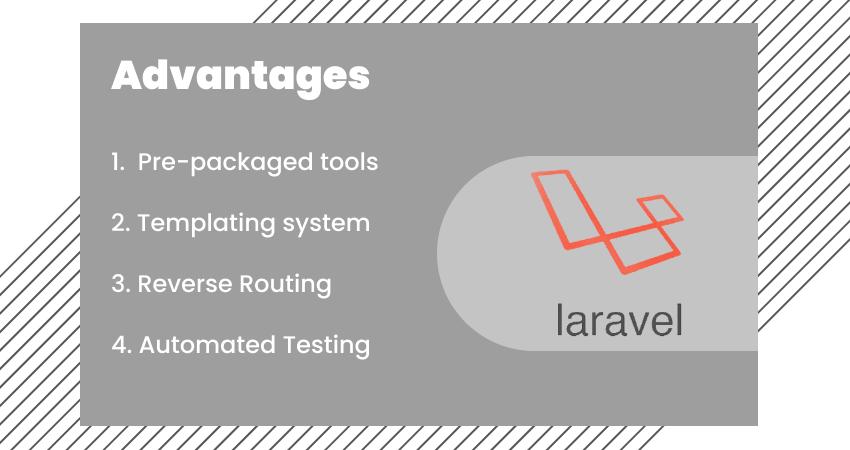 With its template engine, Blade, it provides the power to build complex web app layouts and format data. It’s easy to navigate and enables the addition of new features and modules without making any changes to the core.

Know which is better: Deno vs Node?

Reverse routing is a different feature that provides automatic propagation of changes in routes and that results in relevant links. It creates URIs (uniform resource identifiers) automatically. 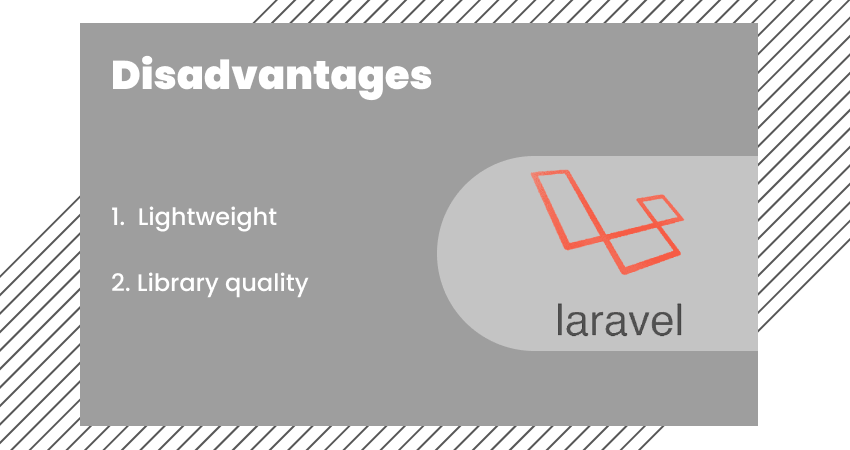 Generally, the lightweight feature is considered an advantage to the framework. However, in Laravel, it causes massive backend congestion of database queries, resulting in lower performance. As the level of congestion rises, the performance gets deteriorated.

Although it’s an open source with great community support, but it leads to unreliable third party libraries. Also, it becomes difficult to figure out which library is quality supported and reliable.

Furthermore, it has an amazing library of JavaScript modules that work great for web applications.

To improve the backend capability, you can also use Node.js-based frameworks such as Meteor.js, Express, and Socket.io.

In fact, it can do more than just creating interactive websites, it can perform tasks that most other scripting computer languages can’t, such as Python.

According to Stack Overflow report 2020, more than 67% of developers have loved the experience with NodeJS

In addition, the NodeJS survey report states that more than 85% developers use NodeJS for developing web applications.

Most popular and successful gigantic tech companies have used NodeJS such as Nads, Twitter, Trello and Netflix.

All libraries in Node.js are asynchronous or non-blocking. It never waits for APIs to return data.

The Node.js event notification function allows the server to get a response from the last API call, enabling the server to switch to the next API swiftly on call.

Node.JS uses a single-threaded looping event mechanism. Unlike conventional servers that generate restricted threads to answer requests, the event mechanism enables the servers to react in a non-blocking way, making it highly scalable.

It’s a single-threaded program that can manage a substantially higher number of requests in comparison to conventional servers such as the Apache HTTP server.

Know which is better for your Development Project: PHP vs NodeJS ?

Earlier NodeJS had procedural spaghetti code in abundance. As a result, frameworks such as TypeScript and CoffeeScript were created to fix the issue.

With acceptance of ES6 and extensions, Classes can be integrated into the system. The code seems to be syntactically identical to Java, Swift, and C++. 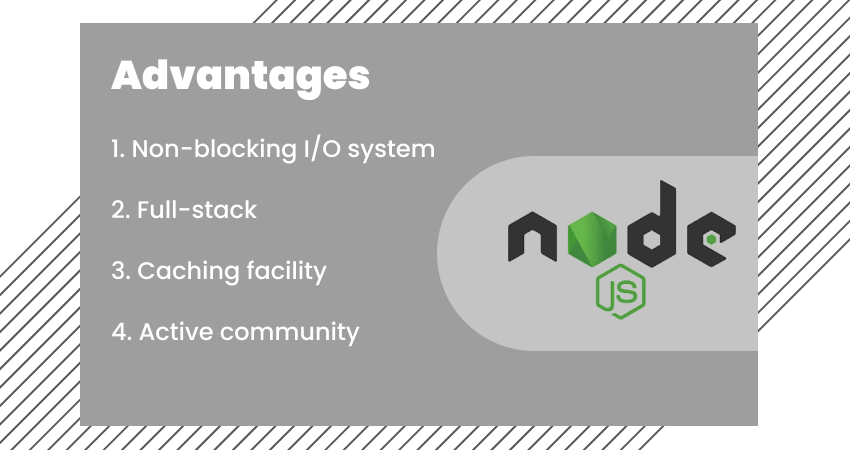 The best part about Nodejs is its non-blocking feature that lets it process several requests at once, making it more scalable and faster.

It offers full-stack development, enabling the developers to both write front-end and back-end in JavaScript and enhances the performance and ensures smooth deployment of the apps.

Know the difference between NodeJS and Angular

The caching feature minimizes the need to re-execute the code to improve the response time. 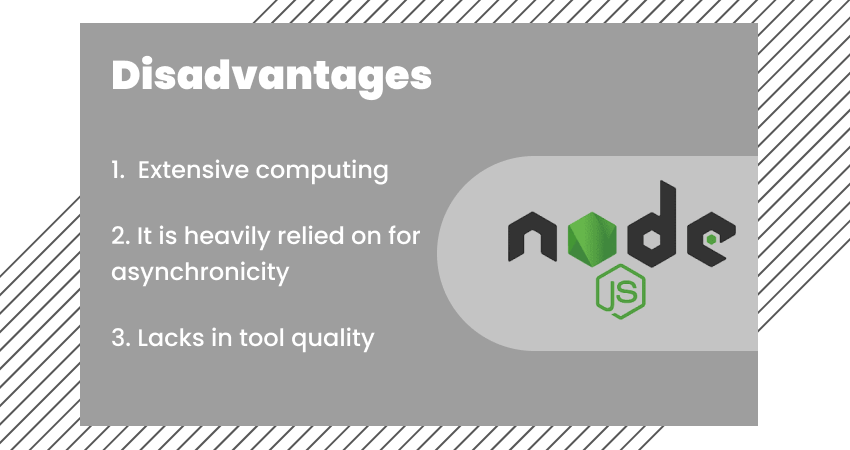 Nodejs does support complex apps but is not suitable for extensive computing. Furthermore, it’s inefficient in heavy calculations as it doesn’t support multiple threaded programs.

2. It is heavily relied on for a synchronicity

It has the best callbacks, but it is heavily reliant on a synchronicity, making the code difficult to comprehend.

There are some tools in Node js that don’t go into resonance due to high coding standards.

Know in detail advantages and disadvantages of using NodeJS

Laravel vs NodeJS: A Detailed Comparison 2023 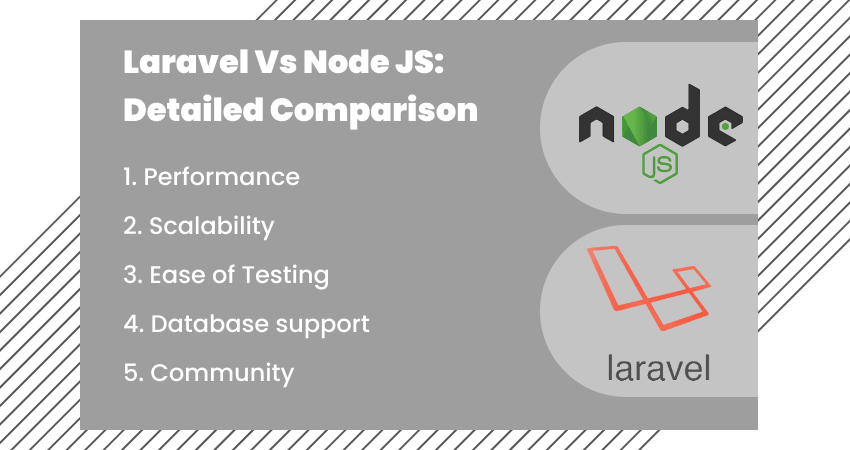 You must be wondering which one is the best and which should you choose for web app development. Here are some parameters on which we have compared Laravel and NodeJS and there is detailed comparison of Laravel vs NodeJS.

Performance is a crucial factor to consider when developing web applications.

Know the difference between Django vs NodeJS

While Node.js offers an asynchronous or non-blocking future, it’s ideal for microoperations or little actions that don’t interfere with the main thread.

Also, it processes multiple requests simultaneously, making it more efficient and a higher performing language than other backend languages.

Furthermore, most tech companies are gravitating towards node js for its high efficient performance.

In fact, LinkedIn saw a reduction in its server turn 20 times faster when it shifted to Nodejs.

The apps that are built on Laravel are scaling up their applications. Laravel gets its scalability from PHP. In addition, Laravel can achieve huge horizontal scaling by using the right load balancer and database.

By using AWL and MySQL, and by using advanced caching methods, it can scale according to the requirements.

Node.js applications are often scalable due to their event-driven models and non-blocking I/O, which can accommodate numerous requests.

Want to How to hire senior NodeJS developers from India

Its event loop mechanism enables the server to handle an array of requests. Moreover, its compatibility with microservices works well together by segregating applications into smaller components.

Through segregation, it becomes easy to allocate tasks and develop applications more efficiently.

Web app development isn’t just confined to developing an app; it’s more than that. The app has to go through a series of tests to ensure it meets the desired UI standards, usability, and compatibility.

Laravel offers tools and resources in abundance for testing. These tools are made available in abundance to ensure that they deliver bug-free applications. To ease up testing, it does test coding at two levels: unit and feature.

Furthermore, it has robust testing documentation and offers various tools to test the application at all levels, and it also provides mock tests.

While Nodejs provides debugging capabilities and competent testing, It does offer various automated testing tools such as jasmine, lab and code, AVA, mocha, jest, and it builds a sound testing environment for applications.

You can make the most of these testing libraries, such as Chai, Mocha, and Jest, to provide a bug-free and seamless experience.

At present, Laravel supports four databases: SQLite, SQL, PostgreSQL, and MySQL. Also, the raw SQL and Eloquent ORM make the interaction with these databases much easier.
You can also establish various database connections to configure with Laravel.

Generally, not all databases support Laravel, but if you get comfortable with a database that supports Laravel, you will face no issues with it.

Conversely, Nodejs supports almost all types of databases, such as NoSQL and relational.

It’s recommended to use NoSQL databases such as MongoDB to store data in JSON objects, as it provides more accessibility for NodeJS.

Know more about Golang vs NodeJS

When it comes to server-side programming for online applications, PHP holds 79 percent of the industry.

The community’s maximum time to resolve a Laravel query is three days. Furthermore, both PHP have a strong community where Developers share Laravel podcasts, news, docs, repositories, and many more.

You can come across the Laravel community on Laracast, Laravel.io, Reddit, dev, Stack Overflow, and GitHub.

Conversely, Node.js has a thriving and well-supported community. According to Stack Overflow, Node.js is used by 51.4 percent of professional developers for frameworks, libraries, and tools. Amazon, Facebook, and Google have all made substantial contributions to the Node.js ecosystem, bolstering the technology’s credibility.

There are various community forums for Nodejs such as Nodebb, Reddit, Stack Overflow, GitHub, Dev.to.

These were the parameters to consider when assessing between Laravel vs NodeJS.

Both technologies are efficient and work best in their own ways. We have compared both the backend technologies, emphasizing the main parameters to help you look beyond the comparison of Laravel vs NodeJS in 2023.

Choose a backend technology that is in resonance with your business goals and requirements.