Advantages and Disadvantages of using Node.js in 2023 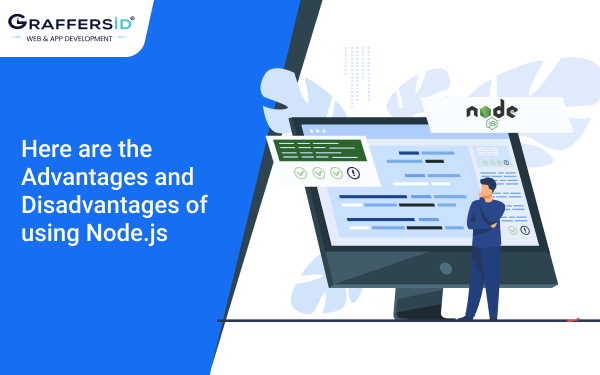 There is no doubt that JavaScript, specifically Nodejs, is one of the widely used client-side programming languages by developers. JavaScript is employed as front-end development and proves to be quite handy for building cross-platform applications.

JavaScript has also a great reputation due to its usage in other popular platforms such as PhoneGap, Apache, NativeScript, Accelerator, Titanium, and more.

In the current area, the area of application of JavaScript has widened, and now it is also being utilized as server-side programming. Nodejs has played a crucial role in this major shift in web development.

Nodejs found applications in almost every application that we use in our day-to-day lives. The applications like Netflix, Uber, Ola, Book My Show, and more, which receive a lot of traffic every day from various geographic locations, are built using Nodejs. Nodejs aids in the smooth and flawless operation of these applications.

Here is a detailed explanation of what Nodejs is all about, why you should choose it for web development projects, and what are the pros and cons of Nodejs.

As mentioned above, JavaScript is one of the popular and versatile languages for developing the frontend web. Nodejs is a framework of JavaScript that is being employed in many applications and server-side programming.

Serving-side programming involves the creation of content for the web page on the server end. And Nodejsplays an important role in server-side programming. Being an open-source JavaScript framework, Nodejs also aids in the development of network and web applications.

Nodejs manages browser requests and offers asynchronous, event-driven I/O APIs to fetch the results not only speedily and accurately. It runs a single-threaded event-based loop, hence all the executions become non-blocking.

Here, it is important to note that:

Here are the advantages of using Nodejs as server-side programming:

Most of the developers have a good grasp of JavaScript for it being one of the most popular programming languages.

For the developers who are already good in JavaScript find it easy to use Node.js at the backend. It is quite easy to learn Nodejs and it also consumes lesser time.

The search engine is empowered by Node.js and it not only aids in the front-end development but also has a great impact on the backend. Nodejs is supported by the Google V8 engine, which has the power to execute at the same time in the front end using JavaScript.

Google lists Node.js as one of the fastest runtime system engines so that’s amazing. Also, with Nodejs it is easy to find mistakes in front end as well as the back end.

One of the key benefits offered by Nodejs is that it makes it easy for developers to scale the application in horizontal as well as vertical directions. The application can be scaled in a horizontal dimension by adding extra nodes to the current system.

Furthermore, Node.js also allows adding extra resources to a single node during the vertical scaling of the application. Hence, NodeJS is highly scalable and offers greater options than other JavaScript servers.

Node.js has regarded as a full-stack JavaScript for serving server-side applications as well as the client.

The benefit of using Nodejs is that you need not hire remote developers for the front-end and back-end, which saves you valuable money and time.

As mentioned earlier, Node.js interprets the JavaScript code through Google’s V8 JavaScript engine. The engine compiles JavaScript code directly into the machine code. Hence, it becomes easy to implement the code. Moreover, it can be done quickly and in an effective manner.

Node.js have a large and active community of developers who keep on contributing to the further improvement and development of this server-side JavaScript.

Developers working on Node.js have supported well by JavaScript programmers who provide them with easy and ready-made solutions and codes in GitHub.

8. The ability of Caching:

The open-source runtime environment of Node.js provides the ability to cache a single module. The entire request for the first modules gets cached in the application memory.

With Node.js, developers receive extended support for various commonly used tools. If you want to test the source code of the Node.js application, you can do it by using Jasmin and other such testing tools.

Similarly, if you want to install or identify the project dependencies, you can make use of npm, which is a powerful package manager.

Node.js system can handle concurrent requests better than Ruby or Python. The incoming requests get lined up and are addressed quickly and systematically.

One of the key problems that developers encounter while working on Node.js is the Application Programming Interface keeps on changing in frequent intervals and does not remain stable.

At times, you will see a new API with multiple backward-incompatible changes. As a result, developers are obliged to make changes in the accessible code bases to remain in tune with the latest version of Node.js API.

2. Library Support System is not strong:

Compared to other languages, JavaScript does not have a robust and well-equipped library system.

As a result, users are force to take support from the commonly available library for executing tasks, such as processing and handling database operations, Object-Relational Mapping, XML parsing, etc.

This makes it difficult for developers to implement common programming tasks using Node.js.

However, developers find this model to be more difficult as compared to linear blocking I/O programming.

Another disadvantage of the asynchronous programming model is that the code becomes clumsy, and programmers need to depend on the nested calls.

Want to Hire Nodejs Developers? Get a Quote Now

Node.js is a quick, lightweight, and efficient programming language. It employs an asynchronous method of operation, event-driven Input or Output, rather than typical or distinct threads for each activity. There are several advantages and disadvantages of Node.js, however, it occupies a prominent role in full stack development. Let’s explore why Node.js could be the best choice for you.

You may exchange code across client and server apps when utilizing Node.js, and you’ll be using JavaScript for both sides of the development process, allowing for easier collaboration between back-end and front-end teams. This also certainly makes full-stack development simpler and more accessible, since you no longer need to locate an engineer that is fluent in numerous programming languages.

Another advantage of adopting Node.js is that it includes built-in JSON support. While the majority of backend languages require additional libraries to read JSON, Node.js handles it uniquely.

These packages were created by the fantastic community and will address practically all general Node.js issues. To speed up and streamline the development process, we employ NPM packages in our products. As a result, you won’t have to code from the scratch.  The world’s largest application library registry is found in Node.js.

By installing not only the library’s code but also all of its dependencies, NPM helps manage application dependencies simply.

All online applications require a host, and with 32% of the cloud market, Amazon Web Services (AWS) is perhaps the most widely used hosting platform available. AWS has strong platform integration and native support for Node.js.

The user may create and edit code straight from their browser using Cloud9, the in-browser Integrated Development Environment (IDE) from Amazon. This is one of the most accessible entry points for a scalable microservice, and it works with Node.js.

As you progress through the development process, you may alternate between static or dynamic typing as necessary, providing you flexibility over the layout of the various system components.

When Should You Use Node.js?

To get the greatest application performance, let’s figure out when to utilize Node.js and what it’s used for in web development.

Real-time communication or chatting is one of the Node.js use cases discussed in the textbook since we have discovered that it can provide excellent speed and performance. When alerts are shown to many people at once, the environment can accommodate a high volume of brief messages or chat rooms.

The processing of real-time flows is another aspect of this Node.js use prime example. Software development firms use the project management tool Trello very much. As a result of Node.js’ event-driven, non-blocking approach, Trello was created on its foundation. It works well for programs that need instantaneous changes, including different collaboration programs and online documenting suites.

For executing IoT programming projects, Node.js is the finest option. Node.js is first of all quick, strong, and able to handle enormous data flows. The ability to connect Node.js with the IoT protocols is the second benefit. The NPM also contains numerous useful IoT modules that support the implementation of even the most complex IoT projects.

When you transfer a lot of data in “streams,” you do so as opposed to sending it all at once. For applications that stream audio or video, this capability is very important. With built-in modules that allow data streaming and enable the creation of both reading and writing data streams, Node.js is particularly well suited for this purpose. You could get a sense of how potent this environment is if we mention that Node.js is used by Netflix, a major worldwide video service provider.

Node.js offers a lot more advantages to developers than its disadvantages. Moreover, it has extended the area of JavaScript applications and can be utilized for both frontend and backend servers.

With the progress of time, more and more business is adopting Node.js and has ended up getting positive results for their business. If you also want to develop an application using NodeJS, you can consult us to hire senior NodeJS developers in India.

Want to hire a remote Node.js Developer? Contact us now!