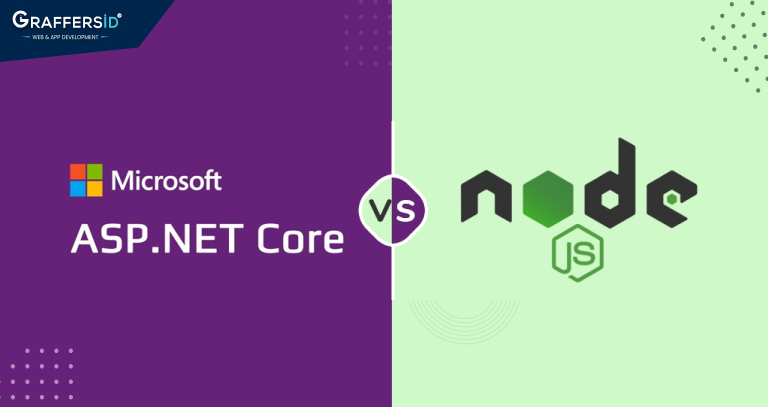 Do you have a software design in mind? If yes, we bet the most important concern would be choosing the right programming language. When it comes to the trendiest programming languages, you might have a lot of options in mind. Honestly speaking, the market has always been loaded with a lot of programming language options. But, to ensure your software, website or app features uncompromising functionality and an easy user interface, you must pick the right language. If you are confused between .NET Core vs Node.js, you are at the right place.

Read on our analysis for a clear comparison between these two languages and to explore why Node.JS is a far better option.

Java is perhaps the best option you have for building spectacular websites and applications. Node.JS is an open-source, single-threaded, cross-platform Java framework that allows developers to develop scalable and fast server-side websites and networking applications. Perfect for building real-time applications, Node runs on a Chrome V8 JavaScript runtime engine and is based on an event-driven, non-blocking I/O architecture.

If you want to hire Node.JS developers, make sure they are well-versed in C, C++ and JavaScript. The framework uses a single-threaded event loop that enhances the working and functionality of handling multiple clients at the same time.

How is this possible?

In a multi-threaded request-response environment, several clients send requests, and the server registers each response individually before responding back. This environment is used to process multiple concurrent calls at a single time. When the server receives a request from the thread pool, it assigns an individual thread to handle it.

Node.JS’s architecture is almost identical to the above environment. However, there are some key differences.

For starters, unlike a multi-threaded environment, Node.JS has a limited thread pool to receive multiple requests. As a result, when the server senses a request, Node places it in a queue. The server uses a single-threaded event loop component to receive requests indefinitely.

Meaning, that when the request comes, the loop picks it up from the queue and analyzes whether it requires a blocking input/output operation or not. If the operation is not needed, the server processes the request and sends it back to the source. In case the server senses the need to operate the blocking input/output mechanism, the request is assigned to the internal thread. The event loop tracks the blocking requests and places them in a loop. This is how Node.JS maintains a non-blocking nature.

This architecture is quite helpful as the framework uses limited threads, meaning fewer memory and resource requirements.

Node.JS is one of the JavaScript frameworks that has witnessed significant popularity in recent years. This has to do with the several features offered by this framework. Here are some of the noteworthy Node.JS features:

Looking to hire remote Node.JS developers? It is perhaps the best choice because Node.JS is growing fast. With a 1 billion + download threshold in 2018, the framework has been hitting popularity ever since.

Here are a few companies that use Node.JS:

There are several reasons why Node.JS is a great pick. Here are some of the applications the framework provides, making it the right pick.

What Is .NET Core?

Unlike Node.JS, .NET Core is a general-purpose framework used by developers to build software applications for Linux, macOS and Windows. With a versatile framework environment and the ability to be used to build all types of software like mobile apps, desktop apps, web applications, cloud services, APIs, games and IoT applications, the framework uses multiple languages.

The framework supports programming languages like TypeScript, XAML, F#, VB.NET, and C#. Moreover, it is open source and supported by several independent communities.

In short, .NET Core is an advanced collection of high-tech libraries, APIs, tools, and multi-language support.

The framework was developed by Microsoft. Currently, it is managed by a non-profit open source organization: .NET Foundation.

Though it is pretty less popular than Node.JS, .NET Core is a modern, flexible and fast framework with the following characteristics.

Stating again .NET Core supports cross-platforming. This means it can help you build applications and software that are compatible with Windows, Linux, and macOS. It also comes included with IntelliSense and debugging, enabling the modern needs of coders. It also supports third-party editors like VI, Emacs, and Sublime.

Here’s how developers can use .NET Core in different ways:

A Detailed Comparison Between Node.JS VS .NET Core

Regardless to say, .NET Core and Node.JS have entirely different processing models. Here are some key differences between the two frameworks.

Node.JS – Node.JS is an asynchronous platform where the server handles multiple requests at the same time and works using an anti-blocking approach. The code is executed in the main thread, allowing the server to spawn different threads at the same time to perform multiple tasks. This is why Node.JS is exceptionally lightweight and efficient, especially if the app or software is loaded with heavy data.

.NET Core – Like Node.JS, .NET Core is also an asynchronous platform. However, the developments made on this framework are not that fast and effective, as compared to Node.JS. Another reason why you should hire remote Node.JS developers.

Node.JS – Let’s talk about performance. But before we move into that, we must understand that the speed and capacity to handle the data load are done differently by both frameworks. Meaning, that performance varies. A server might reflect quick performance, which can be hampered anytime in case the server is loaded with multiple requests at the same time.

In short, when it comes to Node.JS load handling, we say the framework winds the bet. Why? It’s because of the thread pool. .NET is based on a single thread approach for each request. Node.JS offer a non-blocking system that uses limited threads, which not only saves time and other efforts but also helps in proper data handling and data management.

.NET Core – We must say that the .NET core is better at rendering. However, when it comes to requesting registration and assessment, Node.JS is a far better option. Node is based on C, C++, and JavaScript, meaning it is more modern than .NET Core.

Regardless to say, both frameworks have their set of strengths and weaknesses. Therefore, the choice will actually depend on your project needs. However, in terms of security, Node.JS is a suitable option for application and website development. The framework is relatively swift in handling multiple requests without putting a high load on the server architecture CPU.

With a lot of disposable libraries and components, a single-threaded system, easy request rendering and a non-blocking mechanism, Node.JS again wins the best in terms of speed. With .NET Core, you will be able to enjoy upgrading the code with a number of acquired shows. However, the cost of redirecting these arrangements will be quite time-consuming and challenging.

Node.JS – Node.JS is an open-source JavaScript runtime environment perfect for composing backend code using a frontend language. Node.JS also follows a number of measures to ensure it improves the development process for mobile and web applications.

.NET Core – Contrary to Node.JS, .NET Core is a server-side structure with a number of tools and libraries. However, the options are much better in Node.JS.

Who Is The Winner?

As stated above, your framework choice will actually depend upon your needs for the project. It is a great idea to hire Node.JS developers if you are working on medium-sized or small-sized businesses. If you have large-scale application requirements, .NET Core might be a better option. However, you would have to endure low speed and not-so-good performance.

If you are looking to cut down your costs, you can hire Node.JS developers from countries like India to get in touch with global talent, diversify your team and reduce management and operational expenses.

We, at GraffersID, will help you get in touch with highly-skilled professionals who will help you meet your goals in the long run and improve the services.