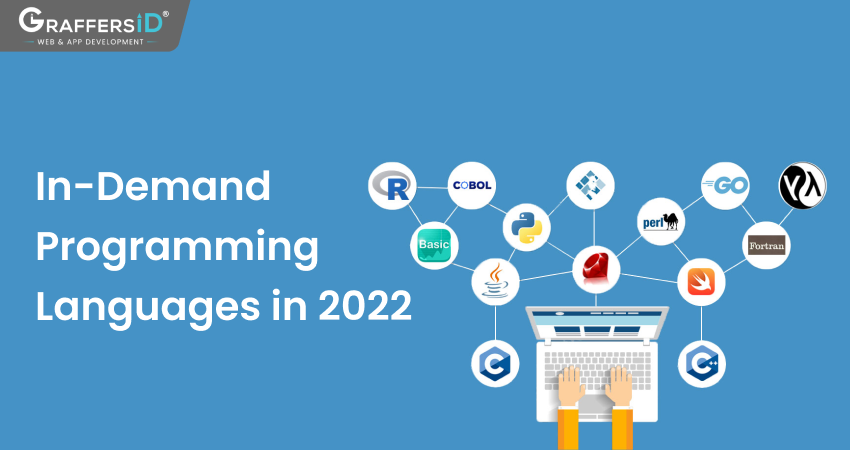 The world of technology is booming and has become a place shrouded in mystery and exclusivity. The programmers are expected to have the edge over the coding abilities to stand out from the crowd.

However, the odds of getting stuck in this constantly evolving world of technology increase with the abundance of new technologies. You wouldn’t want to invest your time and energy in nitpicking any random programming language and learning it.

To ensure that you arrive at the best decision by picking the right programming language, you can assess your abilities by considering the difficulty level, the existing programming language that resonates with your coding skills, your capability to dig deeper into the selected language, and the perpetual demand of that language.

Or would it make any sense to learn some unpopular language that might not pay you much or isn’t worth your time and effort?

If you want to ace the coding industry, make sure you get your hands on the right language so that you don’t end up messing around your head over the wrong programming language.

We’ve compiled the list of the best 8 in-demand programming languages that you can learn without giving a second thought!

What is An in-demand Programming Language? 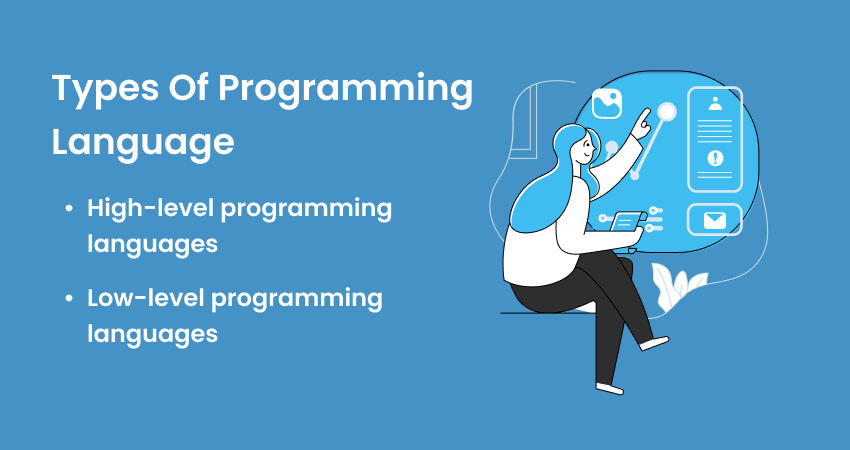 It’s a way through which the developers or programmers communicate and give commands to computers. When it comes to the language in which a program is written, it’s done in Java, C++, C, and Python.

The programming languages are based on coding syntax, which is used to develop software programs for specific task performance.

There are two kinds of programming languages.

Some of the most popular languages are Java, C++, C, and Python. You can make excellent mobile and web applications with high-level languages.

Read Also: Programming Languages that will Trend in Future

Low-level languages can be assembly and machinery languages. Its applicability is to develop programs that are relatively specific to a computer’s hardware and architecture.

Often, developers are reluctant to use machine languages as it gets a tad difficult to write programs.

This paves the way for assembling languages. However, there isn’t any huge difference in the complexity of both languages, as in assembly language, developers have to be efficient in computer architecture to write it.

The assembler also converts it into machine language. Both languages can be used to develop device drivers and operating systems.

How Did We Compile The List of the Top-Demand Programming Languages? 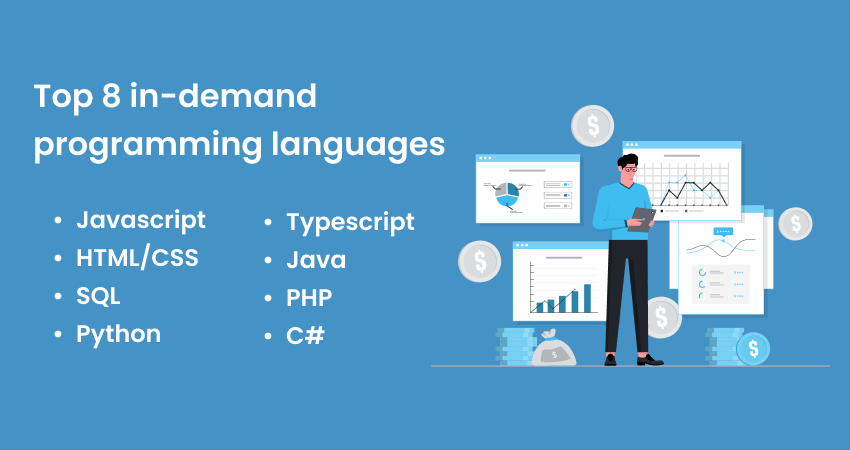 Considering Statista as an authentic source and a renowned company widely popular for having expertise in providing in-depth market and consumer data, we have gathered the list of top eight programming languages that are currently trending and have been preferred by organizations.

According to the latest data from Statista, JavaScript and HTML/CSS top the charts with more than 60% of developers fond of this language, while other languages such as HTML, CSS, SQL, Python, and Typescript are yet another bunch widely preferred languages. 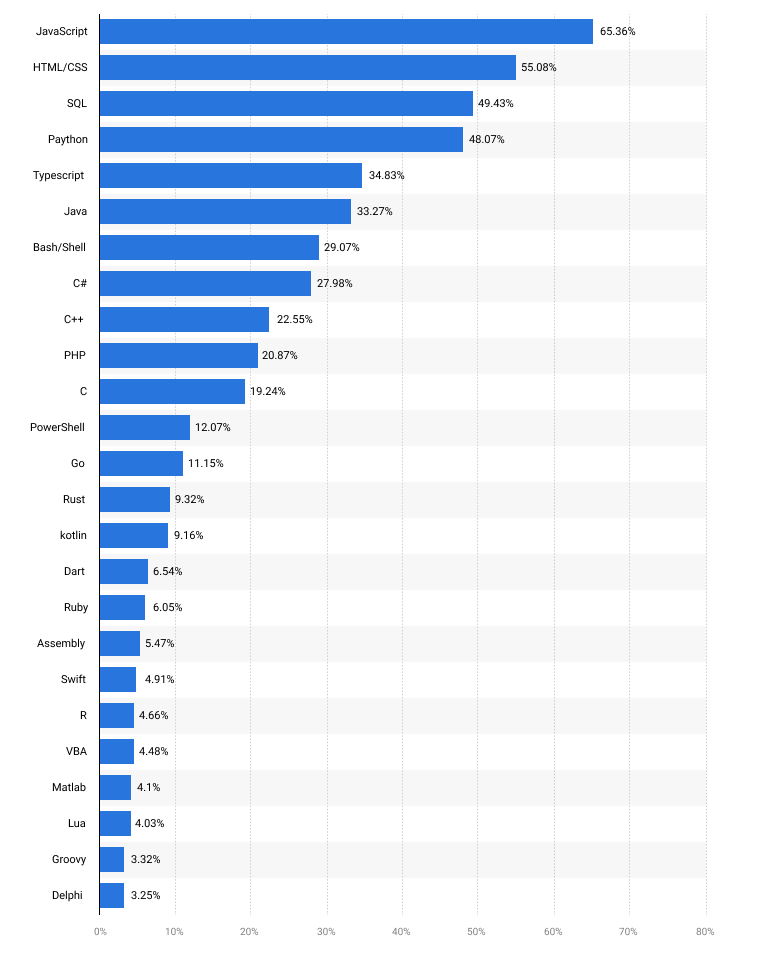 According to internet live stats, more than 2 billion websites have been developed with JavaScript, making it a massively popular programming language.

If you are wondering how it is the best, try this once: don’t enable access to JavaScript on your web browser. You’ll notice that gradually your websites and applications will look monotonous due to a lack of web interaction.

Javascript makes the website interactive and is simple to learn and use. The best part is that you don’t need any prior coding experience to learn it. It’s so easy to learn that you can easily learn it in a couple of days and kick off developing some websites.

In addition, JavaScript is a notable component of the World Wide Web (www)). Initially, the developers developed web browsers with JavaScript. With the advent of time, it’s also been used for non-browser applications and server-side deployments.

Prerequisite skills: CSS and HTML to define the layout and content of web pages.

Want to know PHP vs Python: Which Language to Choose for Server Side Development?

HTML, or HyperText Markup Language, is used to add content and structure text on the web. However, it’s not beneficial on the appearance front.

With the help of CSS, cascading style sheets can be used with HTML to look after the font, color, and positions of elements. It might look like these languages are quite easy to use, but it’s just a facade as it’s difficult to develop applications and websites with them. Hence, developers prefer to specialize in different languages.

Prerequisites skills: No prerequisites. Just a basic knowledge of HTML would suffice.

Popularity: More than 55% of developers prefer using this language for web development, making it a popular language.

SQL, or structured query language, is also referred to as the manipulation language. It’s a database management system that provides massive support for developers in retrieving and finding data where it can also be used to delete, update, and add records.

It’s an excellent language for database and business management and works great for smaller databases and data management in relational database management systems. However, it’s not too good for larger databases.

Prerequisite skills: It’s good to have a mere knowledge of database management skills, and the boom is good to learn.

Popularity: More than 49% of developers are drifting towards the usability of this language.

Python is an open-source programming language that is used to develop 3D and 2D applications that involve Autodesk, Blender, Inkscape, and many more. Also, its usability extends to developing amazing video games.

The readability of Python makes it stand out amongst other popular languages.

Needless to mention, it’s backed by a large supportive community, ease of integration with web services, GUI-based desktop applications, user-friendly data structures, and an easy-to-learn language making it a go-to language for developers.

Popularity: Its usability is growing tremendously in both the business and technology industries.

Want to know Python vs Java: Which Language to Choose for your Application?

Microsoft’s Typescript isn’t as old as other programming languages, as it was introduced in 2012 by Microsoft. It’s best suited for larger code bases.

It can be used for both server-side and client-side development in JavaScript-based projects and works well for detecting errors and minimizing systematic issues.

Prerequisite skills: You should be familiar with JavaScript.

Wondering whether Java and JavaScript are the same?

Java and javascript aren’t the same as java is a more object-oriented language that doesn’t constitute classes and just defines behavior with its constructor function.

Also, the JavaScript codes are written in text and can be interpreted by machines, whereas in Java, they require compilation.

In addition, Java is used to develop web applications. It’s also been used for the backend of the most popular websites such as Amazon, Twitter, Google, and YouTube, and has been used for developing new applications such as hibernate, spring, and struts.

The Java community is huge, which can be used to raise queries when learning Java.

Prerequisite skills: You should have a decent idea of object-oriented structure with problem-solving ability.

You’d be amazed to know that PHP has been used in the development of various websites such as Yahoo and Facebook and has been popular since 1990.

Just a basic knowledge of PHP will help with severed side scripts, and once you get expertise, you will also be able to make some incredible web applications.

Prerequisite skills: It becomes far easier to learn if you’ve got a clear understanding of the basics of programming languages.

Popularity: It’s not quite popular.

You must have got a decent idea about these programming languages and why they have made developers go head over heels. Make sure you select the right language for you based on your interest, and its scope in the future. Contact our experts or visit our website and choose from a global talent pool.