Here are Advantages and Disadvantages of Using .NET 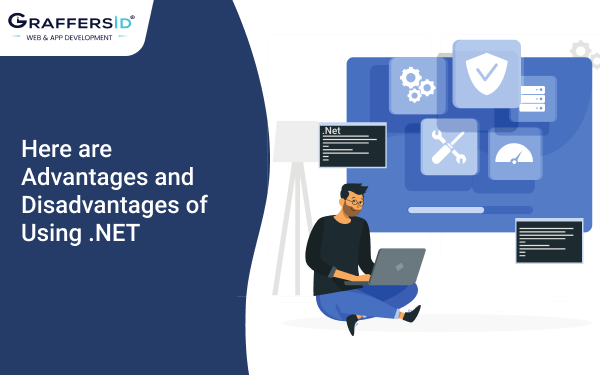 Developed by Microsoft, dotNET (also known as .NET) is a framework that makes application development a bit easy task for developers. The framework supports the development as well as maintenance of modern-days applications and XML web services. dotNET offers a highly consistent object-oriented programming environment to dedicated developers and is used to build applications that can run on multiple platforms.

One of the interesting about dotNET framework is that it supports the creation of cross-platform applications that can smoothly run across server platforms such as Windows, Linux and even MAC.

This framework can be used to design, develop, compile, build and deploy a mobile application with its comprehensive range of compilers, code libraries, support programs and APIs. The varied components of dotNET aids in the development of the customized project.

.NET is widely used by developers for the creation of services and apps on multiple devices and operating systems. One of the aspects that make .NET to stand is the range of features offered by the application.

Want to know estimated cost to develop an app?

Let’s now see the range of applications that can be built using dotNET framework.

dotNET is the perfect option for building interoperable apps that offer flawless user experience across a wide range of platforms.

The plethora of features available in this framework enables programmers to create an application that works in sync across multiple platforms.

If you want to develop application using .NET, then you can hire dedicated ASP.NET developers.

.NET is extremely versatile and thus it is a highly suitable framework for the development of gaming applications. The versatility offered by .NET also allows .NET developers to create seamless web and enterprise-graded applications.

Here is a Difference Between UI and UX

Organizations are not static and the needs are also changing continuously. It is crucial to scale the software according to the growing needs.

dotNET is an excellent platform for re-designing applications and scales them up according to the growing needs of the organization.

Those days don’t exist anymore when business was conducted without the presence of applications and software.

Want to know How to Choose the Right Software Development Partner

.NET utilizes multi-tiered software architecture. It is known as multi-tiered because it physically separates functions for app processing, data management and presentation.

Advantages and Disadvantages of .NET

Here are some of the compelling advantages of .NET:

.NET is based on Object-Oriented Programming Module. OOP is a development model that involves breaking down software into easily manageable smaller pieces. OOP compartmentalizes data into data fields and describes objects behavior through the declaration of classes.

Object-Oriented Programming Module simplifies by making the code manageable, respond to recurring issues and easier to test. It eliminates necessary programming and hence less coding for developers. In addition to this, .NET makes it possible to reuse components and code, thereby saves time and cost of development.

Here is difference between flutter vs angular

Visual Studio is an Integrated Development Environment by Microsoft which is used for building, debugging and publishing applications across various platforms, including Android and iOS.

The key features of the Visual Studio IDE:

Want to know about WordPress Developer: How to hire an expert?

.NET Core is a cross-platform, which means it allows the code to run on Windows, Linux and OS X. dotNET core, unlike the original .NET framework has a fully open source code which ensures that a wide engineering community can contribute to its development.

If you are writing the code in F#, C# or Visual Basic, your code will run each of the compatible operating systems. This allows companies to reach an extensive variety of platforms staying within the .NET ecosystem. At the same time, with the cross-platform design, it also becomes possible for the .NET community to share their large pool of engineering skillsets.

One of the crucial and most advantageous features of .NET Core is flexible deployment. It can be installed as a part of the application you are developing as well as separately. The modular design allows including all the dependencies that you need. Moreover, the deployment with .NET is as easy as copying a folder.

Another benefit is that you can have more than one .NET Core versions running side by side on the same machine. Hence, making it easy to cover different projects and seamlessly perform a deployment task.

With .NET framework, you get the opportunity to develop an application in a multitude of domains, such as gaming, mobile, IoT, AI.

Microsoft has recently announced collaboration with SWIFT, which means putting AI and data in the center of Fintech. This will include creating an ecosystem that offers efficient and secure operations for banks and corporations.

Businesses have realized the huge potential in Machine Learning, Big Data and AI. They are investing more and more in order to integrate such components in their applications. Healthcare, education, marketing, banking, business and pretty much everything in our daily life could utilize AI and Big Data, making life easier.

Learn about How to Hire Offshore Developer For Startups

With each released version, Microsoft added a few percentages on the performance of the application.

Built using .NET Core framework, Stack Overflow, the leading knowledge website for coders, manages to serve it, users, with 5.3 M page views/day and that too with just 9 servers.

Raygun, a company from New Zealand, developed a cloud-based monitoring application for web and mobile applications. The core of the application was written in the .NET framework, but they were using API that received data written in Node.js or Linux to support elasticity.

Over time, Node.js framework becomes heavyweight and slower and required to be scaled up. However, this demanded budget investment. Hence, the company decided to port its API to .NET core. This resulted in increasing their throughput by 2000% just by using the same-size servers as before.

Paired with the right database and architecture, the framework is the perfect solution for any kind of business which is needed to be scale eventually.

Here are Best Frontend Frameworks of 2021 for Web Development

When choosing the appropriate technology, one of the first things that you check is the IDEs and tools that are mandatory or add to productivity.

A lot of them are free, but the best ones come with licensing costs per developer, per, which can sum up to thousands of dollars. No matter, whether you are a Startup trying to find your way into the market or a big company, the money could be spent in a better way.

Visual Code Studio by Microsoft has preferred by a large number of front-end developers as it is good, small, extensible and updated.

When it comes to infrastructure, .NET Core offers you the freedom to pick a provider of your choice that provides you cheaper SLA. Moreover, you can choose to host your application in the cloud.

Even if costs are not something you are worried about, not being forced to invest in something that is not crucial gives your business flexibility and opportunity to invest in the development of your team.

When a framework is used by many businesses and developers, it means it has such features that attract them. It also proves its stability and high level of trust from the community, makes everyone try the framework.

Moreover, a large community means that almost any issue can be solved with the aid of community members. According to the recent survey by Stack Overflow, ASP.NET took fourth place among the most popular frameworks, while dotNET and .NET core has ranked second and third.

Along with a plethora of advantages, .NET also comes with a set of problems. Here are a few drawbacks of .NET framework:

As mentioned above, .NET works on the Object-Oriented Programming approach, which is based on objects rather than actions and data rather than logic. The support of data-oriented software application development in .NET Framework is provided by the Entity Framework.

The entity acts as the bridge between the object-oriented .NET Framework and SQL databases. However, some developers believe The Entity Framework doesn’t offer the required flexibility and doesn’t support all the available database designs.

.NET is a framework by Microsoft. While Xamarin and .NET Core are open sources, the whole ecosystem is far from being the community-driven. This means that your products will depend upon decisions made by Microsoft.

The problem of memory leaks is common with every technology. .NET is also one of those platforms that are frequently  has criticized for memory-related and memory leak issues.

Although dotNET possesses a garbage collector for this problem, engineers are still require to invest additional efforts into resource management.

4. Difficulty in the transition to .NET core

The transition to dotNET core could be long and difficult. The applications built with older .NET versions are far more than that built with .NET core. Transiting these applications to the latest versions of .NET can be a little bumpy.