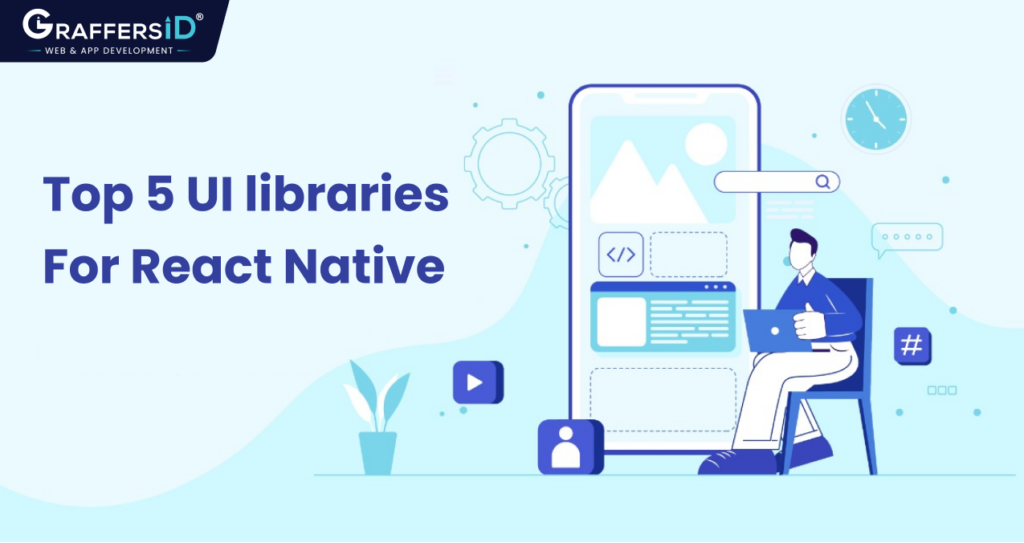 Motion graphics and animation have become essential aspects of the mobile development process. From offering a delightful experience to the users to getting in explicit sync with the understanding of brand values, random aspects of motion adding an eye candy effect to an app is quite an experience.

And, if you are wondering about the technology behind all this, your search ends with React Native. Since its inception in 2015, the React Native community has enjoyed endless options for React Native UI library and new components that have made the app development process easy.

If you are confused about choosing the right UI library for React Native, this article might be for you. We have included the top 5 React Native UI libraries to help you kickstart your UI journey with the best components.

But, before we get into this, let’s take a look at React Native and its benefits.

Factually speaking, React native, is a JavaScript-based framework used for mobile app development for Android and IOS. And what makes it an outstanding option is its ability to create a single application for different platforms using a single code thread.

The framework was first released in 2015 by Facebook as an open-source project. However, little did they know that it would become the best solution for mobile development with its best React Native UI library options. In fact, React Native is the framework behind the world’s leading applications like Instagram, Facebook, and Skype.

Why Is React Native A Global Success? 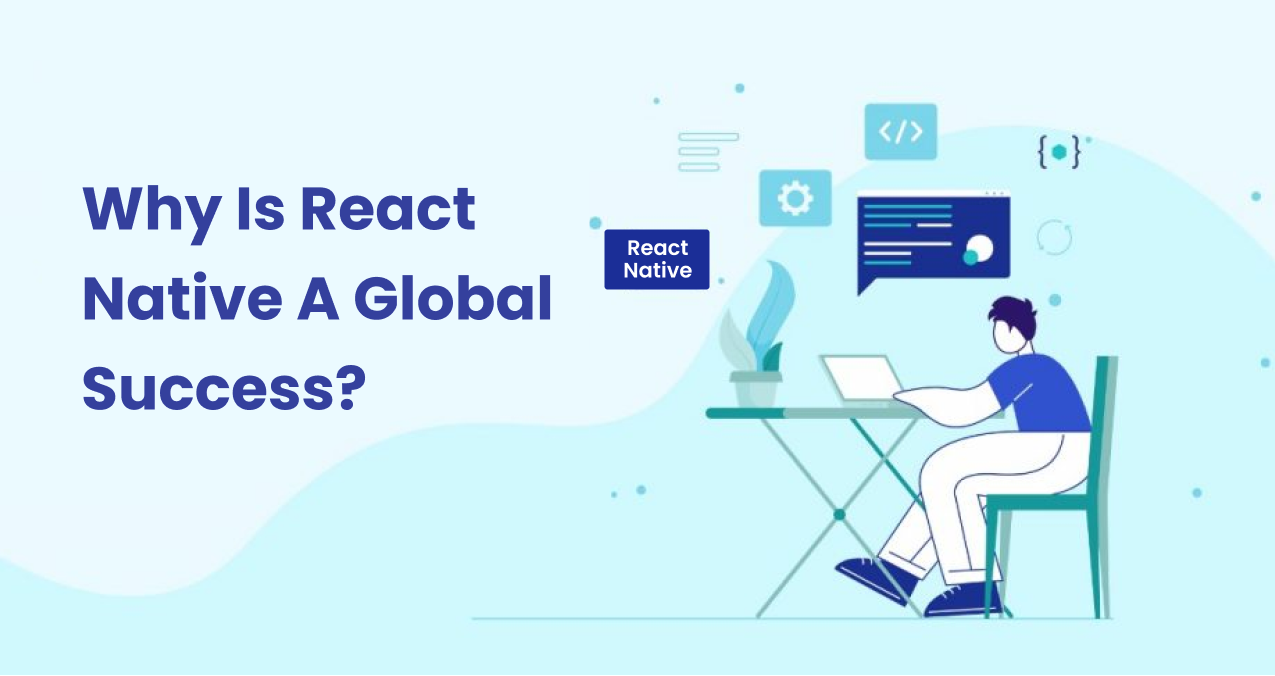 Well, for starters, developers that use React Native are only required to create a single code thread that can be used both in Android and IOS app development processes. Meaning, RN can actually account for saving time and other resources.

The following reason why RN is a perfect app development option is that it’s based on React, which is a JavaScript library. To put things simply, React Native is just a newer version of React, which is a JavaScript library used to create the frontend of a website. Like React Native, React, or also called React JS, was also invented by Facebook. That being said, both frameworks use a combination of JavaScript, JSX, HTML and CSS. And while these frameworks are pretty similar to one another, they are actually sued for different purposes.

Lastly, with multiple UI libraries for React Native, frontend developers can add a robust, modern touch to their mobile applications.

Know the Difference Between ReactJS and React Native


The History Behind React Native

Rather than being built out as a Native app, Facebook was primarily based on HTML5, when the company first decided to provide its services on mobile devices. However, this solution wasn’t an ideal option when Mark Zuckerberg agreed on betting too much on HTML and being so opposed to Native.

Later in 2013, a Facebook developer founded a method to generate UI elements for iOS apps through JavaScript. That’s how React Native was discovered. Before giving it a public framework in 2015, the company updated it with android support.

An Overview Of Cross-Platform Development

Before we get into the many benefits and drawbacks of React Native and the best React Native UI library available to us, let’s take a look at cross-platform development.

Simply put, when it comes to software development, cross-platform development is a holy grail! Factually speaking, a cross-development platform is a practice where developers build software compatible with more than one hardware platform.

For instance, a cross-platform application would be compatible with Microsoft Windows, Linux and macOS. Need a better example? Think about Adobe Flash.

A cross-platform allows developers to build a single code thread and run it on any platform possible. Developers can use languages they are proficient in and leverage from the best React Native UI library options.

The Working Behind React Native

Remember when we stated that RN is a mixture of JavaScript and JXL? Based on two different languages, RN gives you the ability to work with both- JavaScript-based code threads and existent, native app code threads. To be precise, React Native sets a bridge between both. Meaning, if you have already built an Android or iOS app, you can use its components easily.

Moving forth, like React Native, Cordova and PhoneGap are other cross-platform frameworks. But, what makes React native stand out is that it does not render WebViews in the code. In fact, RN runs on actual, native components and views. Facebook, Skype, Instagram, Walmart, SoundCloud Pulse, Shine, UberEats, Pinterest etc., are all outstanding examples of React Native.

React Native And Its UI Libraries

In fact, you can even customize the components instead of using the ready-made ones that not only help you add additional features to the application but can also make your coding game on point.

Regardless, Here are the top 5 UI libraries for React Native. 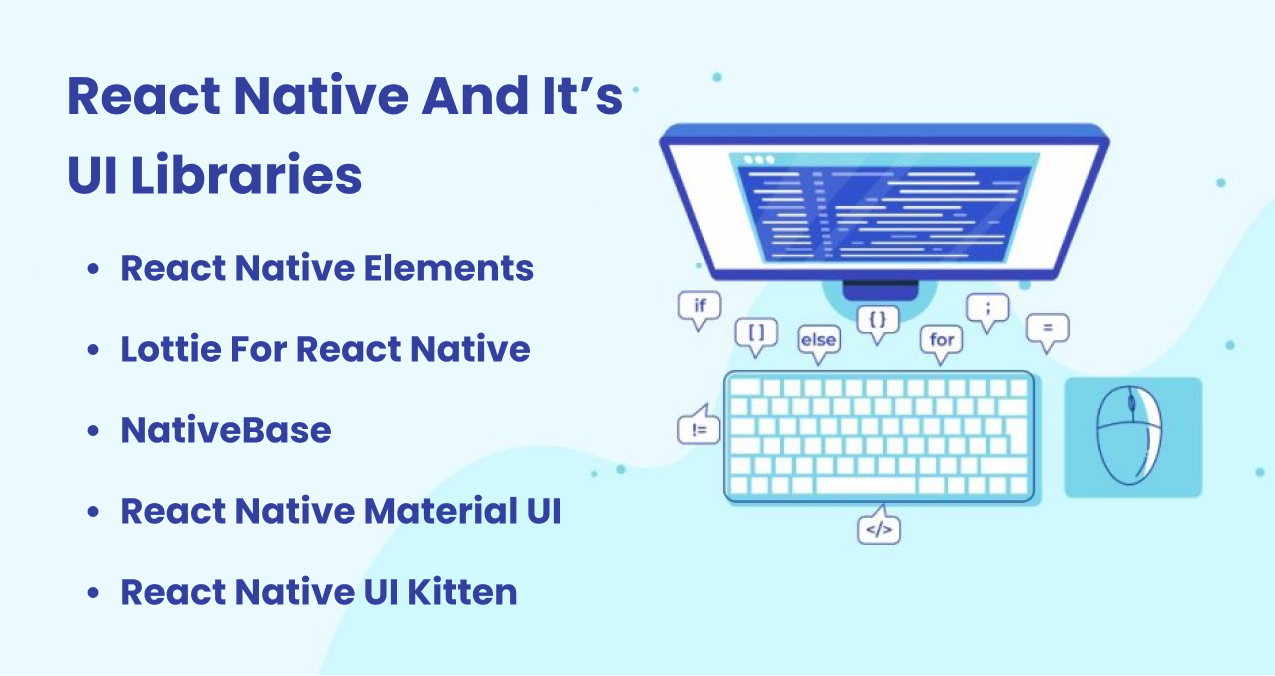 We bet React native Elements is going to be the first thing to pop into your mind whenever you think about the best React native UI library components. If you feel like to need a sense of control over the structure of the component, you can go to this library.

It’s true that its build kit follows Material Design principles, but it’s more than just an opinionated design system. Furthermore, you can level up your components according to your needs, thus getting full control over the app and UX design. It also helps you save a lot of time as you won’t be required to enter a single code thread multiple times.

Frankly speaking, the credit for this one goes to Airbnb. Lottie is a UI library for React Native that provides free access to all the featured communications the Lottie community has to offer. Moreover, you can also curate custom animations through Adobe After Effects.

If we take a deeper look, Lottie uses the Bodymovin extension that allows you to export customized interfaces to JSON format and then render the same into a native app. This library also comes with small-sized and vector files, thus helping you design high-performance apps with an outstanding UI.

This React Native UI library has been around for a long time. Offering the best framework for cross-platform app development, his veteran library is compatible with a number of high-tech, production-ready UI components.

And, if we talk about their basic support, the library also offers pre-configuration. In fact, NativeBase is a perfect option to bring creative and aesthetically appealing ideas to life. You can also enjoy paid templates and supportive themes, which are ideal for a shorter development time. Moreover, because of its customizable features, you can also integrate your work with additional functionalities.

This one had to be on our list. This UI library of rReact Native offers easier and faster app development with the help of 20+ different options for. Customization. The library comes with custom options like Toolbars, avatars, buttons and drawers. Moreover, the library uses Google Material Design principles that allow easier navigation of the features.

Moreover, using this UI library, you can add a personal touch to your projects with self-supporting React components.

This is undoubtedly the best React Native UI library available to app developers. With over 480 different design icons and providing the ability to customize your own themes, Kitten is based on Eva Design System which also allows you to use two in-built themes simultaneously.

Moreover, if you are working on a global project, this UI library can be a great consideration, given the fact that it is compatible with right-to-left coding. The UI comes with more than 20 components, supports web development, and offers a clear distinction between style classes and business logic.

When choosing a UI library for a React Native project, there are several factors to consider:

Ultimately, the best library for your project will depend on your specific needs and requirements. You may need to explore a few options to find the one that works best for you. It’s also worth trying multiple libraries and seeing which one works best for you, consider the compatibility and scalability of the library as well.

Keep in mind that every library has its own characteristics and it’s important to weigh the pros and cons when choosing a UI library for your React Native project.

With its cross-platforming features and multiple React Native UI library options, RN is perhaps an ideal option for application development. You can use a single code thread for both- Android and iOS app development, which helps you save a lot of time. In addition to these benefits, the many UI libraries available with React native help streamline the process to make outstanding UIs and multiple features.

Want to get into app development? Hire React developers from India with us. We help you get in touch with professionals who have extensive industry experience and can better understand your needs and goals. Get in touch with us today to hire remote developers.

Q: Why use a UI library for React Native?
A: Using a UI library can save development time by providing pre-built, tested, and customizable components. Additionally, many UI libraries have a consistent design and can provide a polished look and feel to your application.

Q: How do I choose the right UI library for my React Native project?
A: Factors to consider when choosing a UI library include the number and types of components provided, the level of customization available, the level of documentation and support, and the overall design and style of the components. It’s also important to consider the popularity and community support of the library.

Q: Can I make my own custom UI components using a UI library?
A: Yes, most UI libraries for React Native provide a way for you to create custom components. Some libraries may require you to use a specific styling solution, such as styled components.