What is Laravel used for? 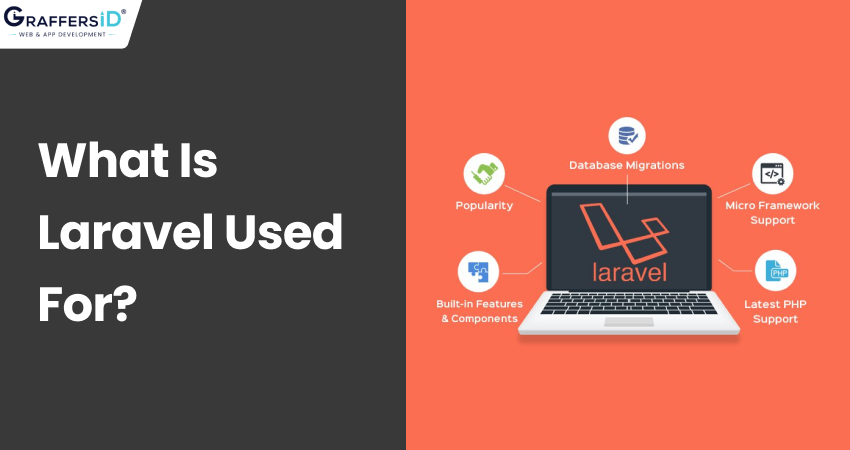 With the evolution of technology, it has become easy to develop websites and web applications. There is an abundance of technologies such as Laravel, PHP and others available to ease the development process of building websites.

Laravel is one such technology that is used for back-end applications. Laravel is a PHP-based back-end framework for web application development.

You can easily develop web applications regardless of the number of web pages. You can create a single-page website or an entire web application with Laravel.

It has an impressive syntax, which makes it easier to learn and build web applications with its awesome set of tools and frameworks.

Surprisingly, according to Trends Building’s research, over 647,000 users have used Laravel for web development as it’s an open-source framework that is easy to learn and robust.

If you also want to develop a website, then you can hire Laravel developers from GraffersID on contractual basis.

If you want to dive deep into understanding Laravel, then here’s an indefinite guide for you to understand Laravel.

If you want to know why Laravel stands out amongst other PHP frameworks and why you should use it for web application development, read this article to dig in more!

This gigantic library makes it easier to build robust applications with a minimum amount of coding. Also, it serves as a highly functional and effective development environment with command-line interfaces and is intuitive.

The best part is that developers can effortlessly add features or functions to their applications as they have robust dependency management and modular packaging systems resulting in highly scalable web applications.

Also, it offers a host of functionalities which consist of the basic features and functions of PHP frameworks such as Yii, CodeIgniter, and various other programming languages such as Ruby on Rails. What makes it build robust and effective web applications is its abundance of features.

If you’re well-versed in Core and advanced PHP, then Laravel is going to make your work much easier as you can easily develop a secure website from scratch. It will help you save money and time. 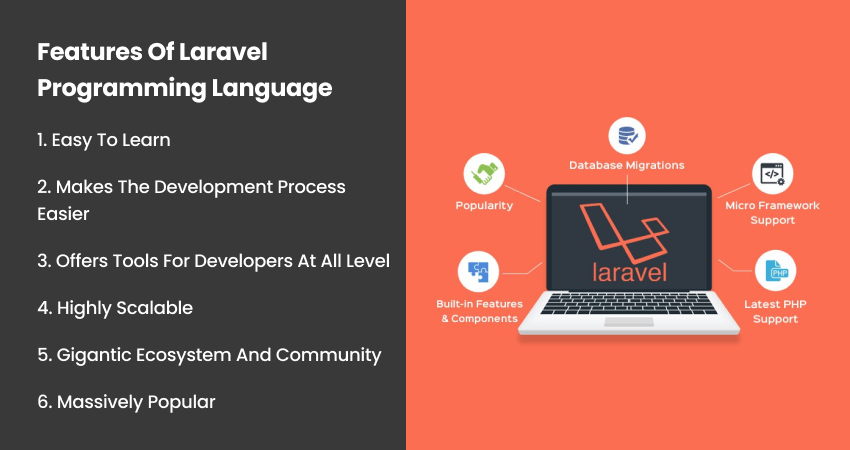 Laravel offers an incredible bunch of robust tools, making the work easier and faster, resulting in well-structured codebases. Also, it’s easy to maintain. You will end up saving time and money.

It’s comparatively easy to learn and use. However, you have to have a core understanding of OOP (object-oriented programming), PHP, and HTML to use it effectively.

Furthermore, Laravel can be effective and helpful in MVA architecture as it’s easy to understand relational database management systems such as PostgreSQL and MySQL.

The prime reason behind designing Laravel was to simplify the tasks that most developers came across in website development, such as migration, caching, authentication, routing, and many more.

It’s simple to construct pre-made modules into applications with the help of an expressive command-line interface and intuitive composites.

Also, it has a huge and impressive collection of online documentation, which is great for experienced web developers. You can also access online learning resources.

3. Offers tools for developers at all level

It has an abundance of functionalities for developers at all levels, making it progressive and standing out amongst all the frameworks.

For instance, beginner developers can access and use starter kits for modules that cover authentication and other features.

While experienced developers can use the engine and the kits provided to create their authentication process and then combine it with the frontends.

Here are Best Frontend Frameworks of 2021 for Web Development

It can scale easily with the help of integrated support for distributed cache systems. Also, it can address trillions of requests per month. Furthermore, it has the serverless deployment platform, Vapor, which is AWS-based and provides a high degree of scalability.

Interestingly, it has a massively large ecosystem that is supported by a huge community of developers. It’s also the most in-demand and widely used PHP framework, making the library of Laravel packages and applications extensive.

The vast community of developers is quite supportive and is flooded with a large amount of information. For queries, you can easily visit any of the Laravel forums, such as the Laravel subreddit, laravel.io, or laracasts.

Most companies use Laravel to build robust and highly functional websites. Popular companies have built their websites with Laravel, such as invoice ninja, my rank, by the chart, Alison, restaurant.com, Setapp, and many more.

Why should you use Laravel? 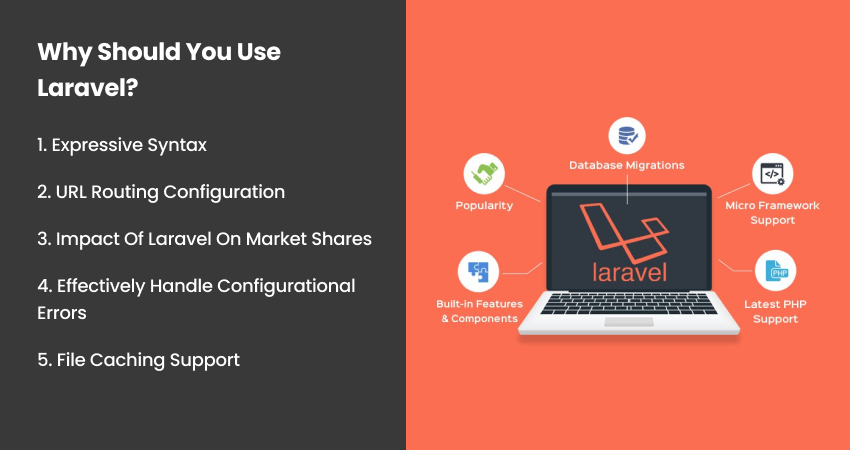 Here is some reason why one should use Laravel for the web development:

Its expressive and easy syntax makes it easier to learn. It is comparatively easy to learn, making it one of the most widely used languages for developers.

The expressive syntax is easier to work with, making it easier to create various web applications.

Laravel uses the routes in a very simple method by accepting URLs and closing them.

Want to know custom built website vs WordPress: What to choose ?

3. Impact of Laravel on market shares

As mentioned, Laravel is a widely used PHP framework across a wide range of industries or domains. There has been a spike in the number of websites built by Laravel, and the growth is estimated to increase in the near future.

In fact, according to the current statistics, Laravel has been used by approximately 646,000 active websites, of which 16.500 websites have been built using Laravel in India.

The numbers are rapidly increasing, making the framework popular. The most popular domains that use Laravel are technology, computers, real estate, science, electronics, arts and science, business, education, and customer service.

User satisfaction and app usability entirely depend on the errors that a software application has.

Errors are frequently detected in data entry forms and displayed when a user clicks the submit button. If any software application fails to handle errors, it may result in poor customer satisfaction. Chances are high that most customers will stop using it.

However, Laravel has a great ability to handle errors and is connected to a monolog logging library that has a wide range of strong log handlers.

Want to know How to create a website in WordPress?

Thousands of internet users visit common or popular websites at the same time, resulting in sending requests to CNS, and to handle them efficiently, web developers can require high-end equipment.

However, it’s far better to directly transfer requested pages once, cache them, and then serve the future requests from the cache.

Apparently, Laravel is designed to use a file cache driver which is designed to store encrypted items and even multiple cache configurations can be set for the same driver.

What is Laravel used for?

Undeniably, Laravel is the most widely used and popular PHP framework, used by many big companies for building web applications.

Businesses from various industries, such as IT, finance, entertainment, travel, and retail, use Laravel as a backend framework.

This question might have popped up in your mind: what’s the purpose of using Laravel and why do big companies prefer building web applications?

The answer is quite simple: Laravel is massively popular due to the plethora of features it offers to make the work easier.

Primarily, it’s been used by most companies to build custom web applications by using PHP. This web framework has the extensive capability to handle multiple things by itself, such as templating, routing, and authentication.

Know more about PHP vs NodeJS-Which is Better for your Development Project?

Laravel runs on PHP due to its server-side and massively emphasizes data manipulation and model view controller design.

Other frameworks, such as React, focus on user interaction and their fancy features. However, Laravel provides a stable and solid platform to build on and it does it well.

The best part is, if your application focuses more on a blog-style that has multiple text-based posts, you can use WordPress, which is also PHP-based. Instead of forcing you to use features you don’t desire, Laravel lets you construct with tools that are similar to those found in WordPress.

Is Laravel a Backend?

Laravel is majorly used for backend framework development. However, it does provide front-end functionality and some of its features are front-end driven.

Does Laravel use scripting language? 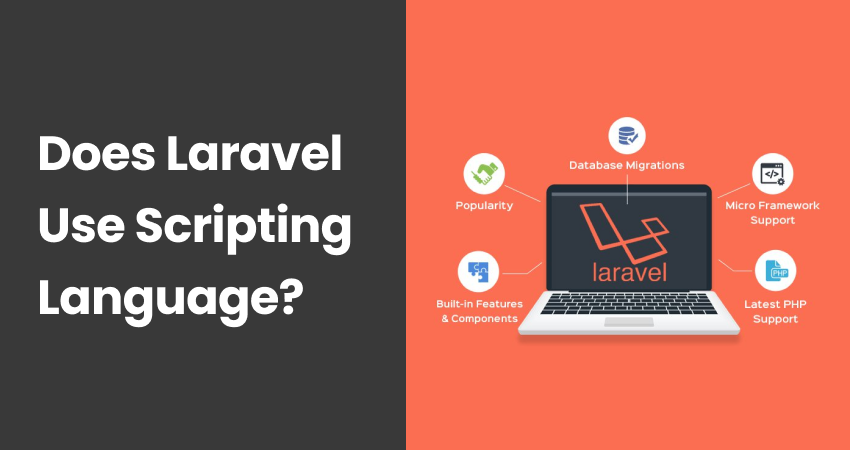 If you’re wondering whether scripting and programming languages are the same, In reality, they are both different and are often differentiated by speed and usability.

Scripting languages depend on the compiler on which the application is working.

If you want to develop web applications fast and effectively, then you should perhaps consider learning Laravel or getting the web applications built on it. It has an abundance of resources that can simplify the development process by minimizing the need for coding.

It also has an intuitive command-line interface and a secure virtual development environment. Furthermore, it has a strong community and is easy to learn for beginner developers or expert developers.