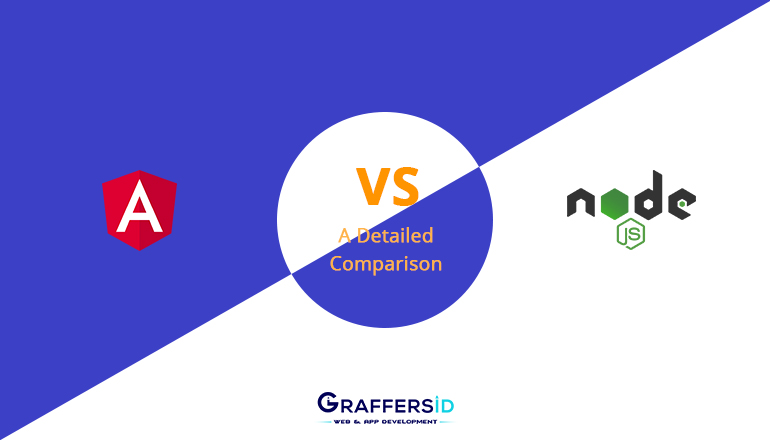 Over the past few years, JavaScript has made its headway from being simply client-side scripting language to emerging as a powerful programming language. In this blog, we will be comparing two of the most important JavaScript– AngularJS vs NodeJS and discover the differences between the two.

Web development technologies have evolved drastically in the past few years. The technologies which were trending a few years back have now become obsolete. For instance, technologies such as NodeJS and AngularJS are opted worldwide for website development currently.

According to the recent survey by Stack Overflow, both Angular and Nodejs are widely used languages for web development.

In fact, JavaScript has acquired 1st position as the most preferred language by the professional developer in 2018 as well as 2019. And, that is the reason behind the growing popularity of Angular and Nodejs.

Nodejs is an open-source server framework that runs on a plethora of platforms such as Mac OS X, Windows, Linux and Unix.

It is developed on Google Chrome’s V8 JavaScript engine and constitutes features like a non-blocking I/O and event-driven model that makes it lightweight and efficient.

NodeJS is best framework for data-intensive, scalable and server-side web applications. To develop an Intuitive web application, you can hire dedicated NodeJS developers in India.

Here are the key features of Nodejs framework:

Know the difference between ReactJS vs EmberJS

Launched by Google in 2009, Angular is an open-source, client-side framework. AngularJS is used to build single-page applications and also applications that constitute separate functional layers.

One of the biggest advantages of using Angular is that it binds that utilizing Expressions. Furthermore, it extends HTML attributes with Directives, which in turn, help developers to add dynamic views to web apps.

AngularJS acquires 2nd position among top JavaScript framework and the main reason behind it is its Model-View-Controller architecture,

The MWC architecture of Angular enables a developer to build interactive and data-driven web applications, which makes it the most preferred JavaScript framework.

Here are the key features of AngularJS:

Know the difference between ReactJS vs AngularJS

Difference Between NodeJS vs AngularJS

Here is the comparison of both these JavaScript platforms:

The Angular framework is build to create structured applications for both mobile and desktop platforms. In addition to this, Angular is an ideal framework for building dynamic web applications.

Nodejs framework is designed for building web servers, and web applications that can be scaled depending upon future needs.

Angular developers do not need to install the framework on their systems. The developer can directly embed the Angular framework in code just like other JavaScript files.

In Nodejs, developers can write code in JavaScript, however since Nodejs has a run-time environment, the developers must install Nodejs in their system to create the needed development environment.

Here is the difference between Flutter vs Angular

Angular is written completely in JavaScript. Moreover, it even follows all JavaScript syntax rules.

On the other hand, the NodeJS framework has developed as a run-time environment on Google’s V8 JavaScript Engine. Several programming languages, such as C, C++, and JavaScript, have practiced to create it.

Both Angular and Node support a wide range of programming languages.

Angular allows developers to build interactive, client-side web applications, because of which developers all around the globe are utilizing this framework today.

On the other hand, mainly JavaScript developers use NodeJS to create highly scalable and fast server-side applications.

AngularJS vs NodeJS, AngularJS is a client-side framework and NodeJS is a run-time environment.

This means that you can create exceptional isomorphic applications by integrating Angular and Nodejs framework. In fact, both of these frameworks can connect for the Mean Stack Development.

Though this process is a bit tricky and you require to Hire Senior NodeJS Developers India or hire dedicated Angular developers in India to ensure that integration is done in the right way.