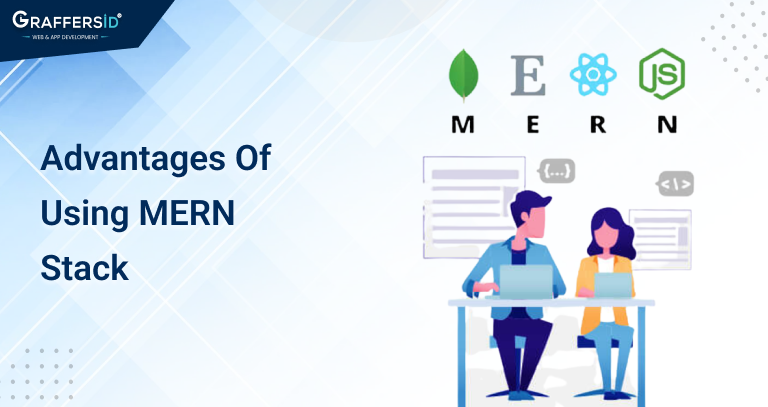 The rapid growth of the digital marketing sector has raised consumer expectations. Developers toil nonstop day and night to create a website with a better user experience, a faster download speed, and compatibility with mobile devices. Read along with the article to know the top-notch MERN Stack Advantages.

File formats, HTML, and web applications are the foundational elements of software development. But they are no longer sufficient to meet the needs that come after. As a result, developers currently favor the MEAN technology stack and the MERN stack project.

The MERN stack has several benefits, including managing client data, estimates, job production, scheduling, order fulfillment, shipment, invoicing, and finance, among others, all from a single application.

The MERN stack: What Exactly Is It? 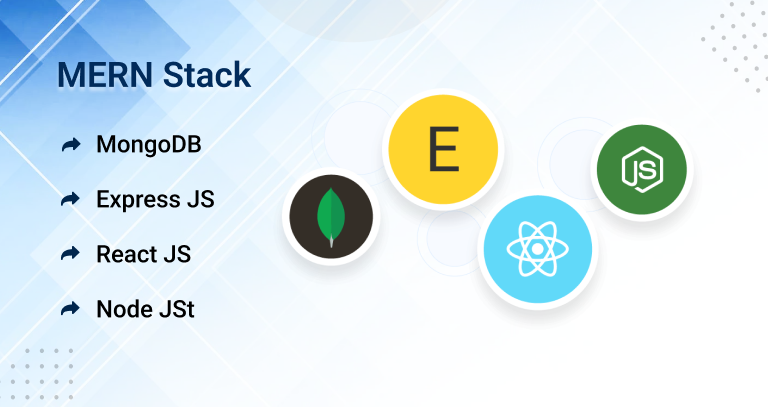 The MERN stack is a fusion of tried-and-true and cutting-edge methods to create scalable master software applications for the front-end, back-end, and data systems. JavaScript-based platforms are the only ones to create dynamic web pages and apps. As a result, companies expressly want to leverage it as a platform.

MERN Stack is a specialty of several software development companies. It includes cutting-edge software such as MongoDB, Express, React JS, and Node.js.

It is a document-oriented, schema-free database. The database manages the web application’s backend using a JSON-based query language.

It is a framework for server-side applications that encapsulates HTTP requests and answers and facilitates the mapping of URLs to server-side operations. The HTTP module is removed from a web framework for Node JS with a simple structure.

Node JS is the JavaScript runtime environment. The V8 JavaScript engine in Chrome powers the asynchronous language used by the MERN component.

With a productive backend, you can speed up the development of web apps while increasing loading times.

Looking to hire MERN Stack Developers? Get in touch with us here!

How to Use the MERN Stack with Three-Tier Architecture 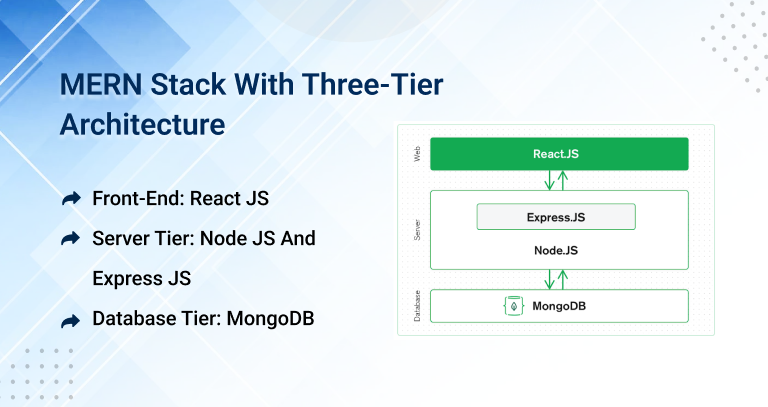 The MERN stack, a collection of powerful and capable technologies, is used to develop scalable web applications. Using JSON and JavaScript, the MERN architecture makes it simple to build 3-tier systems that include front-end, backend, and database components.

The top tier of the MERN stack is React JS, a JavaScript framework for developing client-side HTML applications. Complex interfaces that link to data on a backend server and output as HTML can be made using simple elements.

React is solid and impulsive, managing data-driven interfaces with less code, an advantage of the MERN stack. It supports forms, lists, events, and error handling in one place.

A vital benefit of the MERN stack is the server-side framework Express JS, which runs on a Node JS server. Express JS is a speedy, unbiased, and light Node JS web framework. It has modules that enable matching an incoming URL with a server function that can deal with HTTP requests and responses.

To connect to Express JS functions that enhance your application, you can utilize XML HTTP requests or React JS front-end POSTs. The functions use Node.js drivers for MongoDB to read and update data in your MongoDB database.

One of its benefits is the MERN stack’s ability to store data for content, user profiles, uploads, events, and comments. The ideal situation would be for a database to work seamlessly with Node, Express, and React.

React JS generates the JSON files on the front end, which are then sent to the Express JS server for processing and instant archival in MongoDB for recovery. You can get a lot out of the MERN stack by creating a web application that depends on the system’s functional requirements.

Benefits of Utilizing the MERN stack 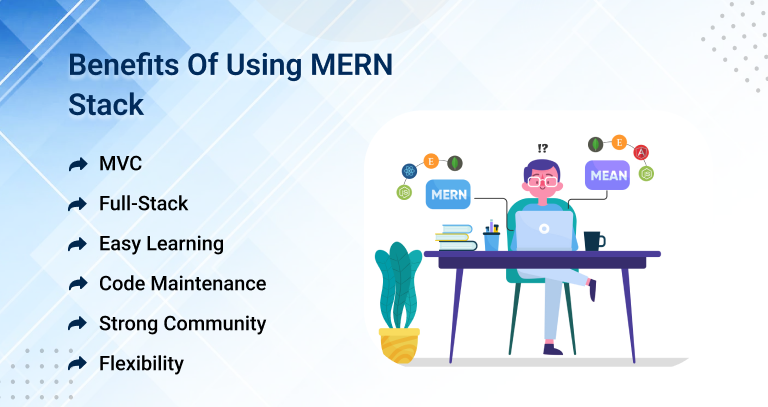 There are many benefits related to the MERN stack. There are some of the most important benefits below to help you understand. Look at the benefits of creating web applications utilizing the MERN stack.

One of the prime advantages of the MERN stack is the Model-View-Controller architecture it offers and how straightforward it is for developers to construct online programs. One of the most important aspects of a MERN application is that it is designed to be distributed using a micro-services architecture, in which each micro-service is ideally independent of the others and only depends on a select few other services. MERN allows programmers to create incredibly trustworthy programs.

Programmers can write programs more quickly and with less effort just because of the MERN Stack tools. Developers may more effectively concentrate their time on resolving issues, creating new features, and enhancing the product by eliminating the complexity of API calls.

The MERN stack consists of a framework, a runtime system, and a programming language. MERN is a programming language that combines the online and offline worlds. Thus, web developers can make the most potent in-browser applications without a browser window. The JavaScript-based runtime Node, which is efficient and speedy, may now be used to run MERN apps. MERN Stack Developers should have a solid grasp of JavaScript and JSON to use the MERN stack advantages while developing online applications.

Using the MERN stack, developers may create applications that are simpler to manage than conventional web applications. It is a MERN architecture with multiple tiers. It is a scalable solution that allows for both upscaling and downscaling without compromising the integrity of the code. It saves time and money in a more significant way.

MERN stack is becoming so well-known over time because of its functionality, which combines the front end, back end, and database. Due to its popularity, a growing community is stepping forward to support developers in their search for the ideal answer.

Using MERN architecture has many advantages, one of which is that it permits the tech stack’s components to be open source, preventing license problems.

Applications needing reliable data and business logic separation are particularly well suited for MERN. A MERN platform simplifies the code for the front end, back end, and database separately, which is a significant advantage.

It provides straightforward code maintenance and problem-solving, making it a cost-effective choice. It also has sophisticated testing tools.

The technology stack has a large community. You can get your answer by seeing apps like Uber, Instagram, Spotify, and Snapchat.

Another advantage of the MERN stack is the ability of its components to be free software, which prevents licensing issues. Due to the tech stack’s broad usage, you have a variety of possibilities for creating web applications.

The speed at which React JS renders on your screen is one of its primary determining factors. Your users will feel that they are not waiting for your content to load if your website is fast, whether you are creating a challenging piece of software or an essential one.

React has emerged as one of the most (if not the most) adaptive JavaScript frameworks, even though many exist.

Its code is concise, clear, and easy to understand. Though its ideas may require some time to understand thoroughly, it’s one of the more approachable JavaScript frameworks for web application developers.

Two-way data binding, by default, exempts you from the bulk of your features.

MEAN Stack Development has been around for a while, but MERN is just now starting to gain traction. MongoDB, Express JS, Angular JS, and Node JS are the four open-source technologies that comprise the MEAN stack. Angular vs React is the primary distinction between these two stacks, as shown by the acronyms. It is useless to compare Angular and React because, as was already explained, Angular is a complete framework while React is a library. The MERN stack is the greatest for developing tiny applications, even though MEAN will undoubtedly assist you in establishing large projects.

The MEAN stack, which uses the four technologies MongoDB, Express JS, React JS, and Node JS enhances the development process for various MERN stack project ideas by making the user interface (UI) more dynamic. It can be utilized for web and mobile apps and is preferable to traditional ones. The developer had to figure out how to connect the previous systems’ client and server sides because they were written in different languages. Furthermore, dealing with MERN stack technologies is easy because they use JavaScript.

MERN stack provides you with various advantages right away and helps you effectively engage your audience. Having a MERN-stack developer on board is an advantage. Full-stack development is a field that requires expertise in a variety of technologies and subject areas. It is highly sought after because it combines and synthesizes those many subjects into a single field of knowledge. MERN-stack engineers can offer any combination of web development, mobile application development, or UI/UX design services in order to ensure the highest quality apps.

If you are a fresher and doing your start-ups then pick MERN Stack because it is an open-source technology that constantly improves computer experts worldwide. Additionally, since every element of the MERN stack is open source, you may utilize it to create robust web applications. GraffersID is one of the best outsourcing companies where you can hire MERN developers having ample skills and experience in the field.

Get in Touch With Us