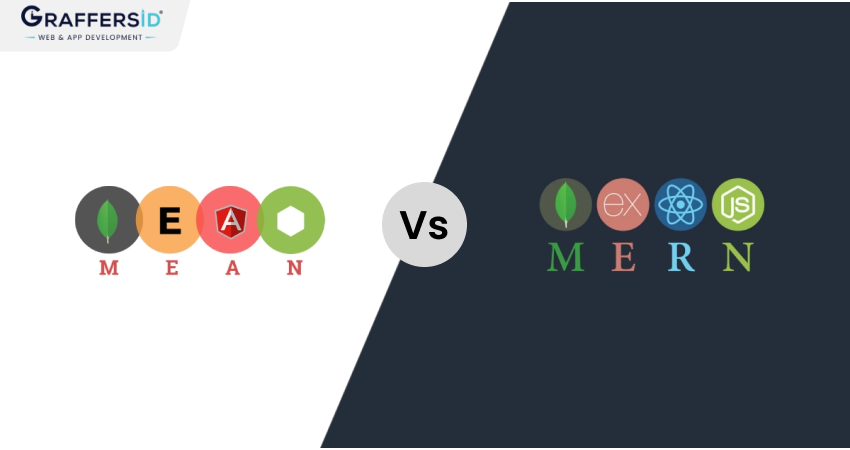 Full stack development plays a crucial role in web development as it’s used in front-end, back-end, application testing and software development. When it comes to full-stack development, startup get confused between MERN vs MEAN Stack, which is the best technology stack.

Due to the increase in demand for web applications, the demand for full stack developers has increased.

According to hackerrank, the demand for full-stack developers is estimated to increase by 198%.

Each web platform has two sides: front end and back end, where front-end development focuses on the design and interface of the website. It’s the part that is seen by the user while backend development entirely focuses on managing data for the front-end. It’s not visible to the users.

When it comes to full-stack development, Mern and Mean Stack are the best.

MEAN and MERN are both full-stack frameworks consisting of Java-based components.

However, there’s a thin line difference: the MEAN stack uses AngularJS while the MERN stack uses React JS, which is built by Facebook.

Both these stacks do wonders for websites by creating responsive and intuitive User Interface.

If you’re stuck on them and want to dive deeper into knowing them, this article is for you. It provides a complete guide to MEAN vs MERN stack and will help you decide which one to choose for your next project.

What is the Mean stack?

MEAN helps to build robust web and mobile applications, and its abbreviation stands for MongoDB, ExpressJS, AngularJS, and NodeJS.

MEAN is an open-source JavaScript framework with a comprehensive set of testing tools.

The foremost benefit of using it is that its entire coding is done in Javascript.

As a result, it is simple for beginners to explore and learn. Furthermore, the development cost is quite affordable and is worth the time.

In addition, it comprises various reusable modules and libraries that result in building scalable and minimum viable products.

The architecture of the MEAN stack is quite simple and is incredible for building web applications in Javascript and handling JSON efficiently. 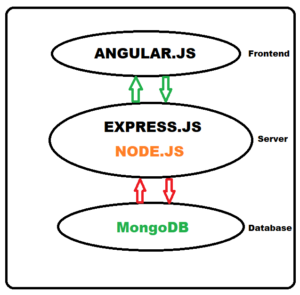 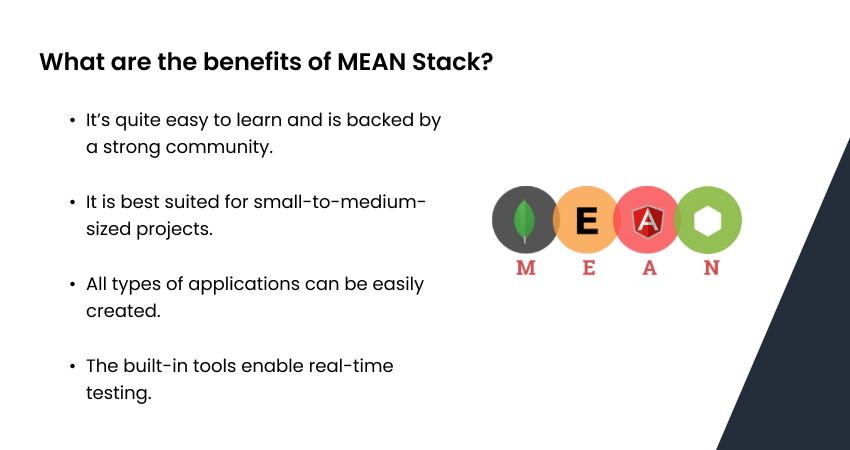 It is quite flexible and adaptable to code transfer with other frameworks. This can be used to create a strong framework that supports daily needs.

It’s quite easy to learn and is backed by a strong community.

It is best suited for small-to-medium-sized projects.

It spans the entire development cycle, from the client to the server. It’s ideal for front-end development and is used for single-page applications with a dynamic user interface.

All types of applications can be easily created.

This stack is compatible with a variety of plug-ins and widgets. This is useful for development with a shorter time frame.

Because the framework is open source, developers benefit from community support.

Both back-end and front-end are written in the same language. This improves coordination and allows applications to respond more quickly.

Why Should You Hire Mean Stack Developer?

The following are some of the benefits of hiring a MEAN Stack developer:

MEAN Stack Developers use JavaScript in the whole development process of the application.

They use the MVC architecture to reduce the amount of work and thus smooth out the development process.

They use the best technologies for the job, such as MongoDB and Express.js for the backend and Angular.js and Node.js for the frontend.

The framework has been used in such a way that it enables plugins and minimizes the system administration time.

Want to know how to hire Offshore developer for Startups?

What is the MERN stack development?

MERN is an abbreviation for MongoDB, ExpressJS, ReactJS, and NodeJS. This framework uses Java as its primary component to make mobile and web development easier and smoother. If you are looking for dedicated developers from India, Consult with GraffersID, a leading staff augmentation company.

MERN Stack is a popular alternative to MEAN Stack in which traditional Angular.js is replaced with React.js, making development much smoother and easier.

Similar to MEAN, MERN is a set or collection of frameworks, Javascript databases, and runtime environments. The MERN stack provides a complete framework for developers, resulting in a rapid growing demand for it. 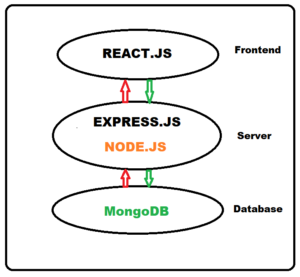 Know how to hire dedicated senior NodeJS developers from India

Why should you choose MERN stack development?

When compared to the MEAN Stack’s Angular.js, the MERN Stack’s ReactJS is superior for UI layer abstraction.
Its collection of dynamic user interfaces readily available within the library allows it to execute code development quickly. MERN excels at controlling and updating large amounts of dynamic JSON data that can be navigated smoothly between the frontend and the backend. 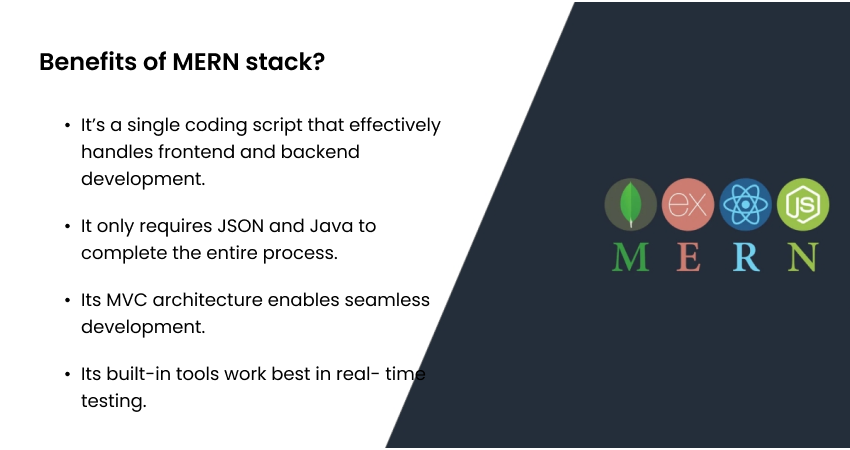 According to the HackerRank report, 30% of developers chose AngularJS while 26% chose React JS.

According to the report, 30 percent of programmers wanted to learn React JS and 35.9 percent of developers prefer to develop using React JS, so MERN is slightly more popular than MEAN.

Why should you hire MERN stack developers?

Here are a few more reasons to consider:

Know how to hire developer for your startup

Earlier, angular was quite an in-demand framework. However, with the advent of time, react has surpassed it by outperforming it.

According to the hackerrank report, Angular was the most popular programming language according to research conducted by HackerRank in 2019.

More than 30% of programmers had in-depth knowledge of this programming language.

React came in second place, with 26 percent of the surveyed programmers saying they knew it.

In 2019, the figure got flipped as the same report quoted that more than 30% of developers then wanted to learn the React framework, making it insanely popular. It resulted in a dip in the demand for angular by 20%.

The corresponding figure for Angular is 57.6 percent, which places it ninth. According to the report, React has surpassed Angular in terms of popularity. While React was preferred by 31.3 percent of programmers, Angular was preferred by 30.7 percent.

Here are some other peculiar differences to consider:

Both stacks share components such as express JS, node JS, and MongoDB. However, the productivity differences can be seen and analyzed by measuring the differences between angular and react.

Other third-party libraries are frequently used alongside React, resulting in lower developer productivity.

In addition, angular does also cover CLI, which is the command line interface, resulting in boosting productivity.

The presence of third-party libraries makes react a slightly tedious and less productive stack, while on the contrary, angular CLI is quite useful.

Nodejs, ExpressJS, and MongoDB already have extensive documentation resulting in a discernible difference in their learning curves.

However, the learning curves for Angular and React l differs.

Angular is a full-fledged framework that comprises templates and typescript and it has a steep learning curve than react.

Want to Hire ReactJS developers for your startup?

The data flow in Angular is bidirectional, which means that changing the UI automatically changes the model state..

On the contrary, the data flow in react is unidirectional and it enables you to change UI only after changing the model state in react. The unidirectional data binding provides you with a better data overview resulting in managing the larger projects.

As a result, the MERN stack is better suited to managing lengthy projects.

However, if you are working on a small project, the bi-directional data-binding provided by Angular is a more-effective approach. Using the MEAN stack here will benefit you.

AngularJS had initially been quite unstable, and it had undergone significant changes from version 1 to version 2, but has now released a stable version.

However, it now stands firm as a fantastic JavaScript-based MVC framework. On the contrary, React JS enables you to build code more effectively and quickly.

Want to know ReactJS vs AngularJS: Which is better?

LinkedIn chose the MEAN stack over the MERN stack for an enterprise-level project to keep the architecture. Although the MERN stack greatly simplifies UI rendering, it is only a library. It simply provides methods for making rendering easier.

AngularJS has a well organized framework to aid MVW or MVC architecture. In MVW, the database and UI have separate intermediate layers.

This facilitates code management and makes code upgrades a breeze.

As a result, the MEAN stack is preferable for enterprise-level architecture.

MEAN vs MERN stack : What should you choose?

With the implementation and utilization of both the stacks, such as MERN and MEAN, web and mobile application development have become far easier.

Both the MEAN and MERN stacks share many similarities and offer several advantages.

However, they massively differ. For instance, if you want to develop mobile applications, undoubtedly the MERN stack works the best.

It all boils down to the demand of your project. Make sure you select the best tech stack based on your project requirements.