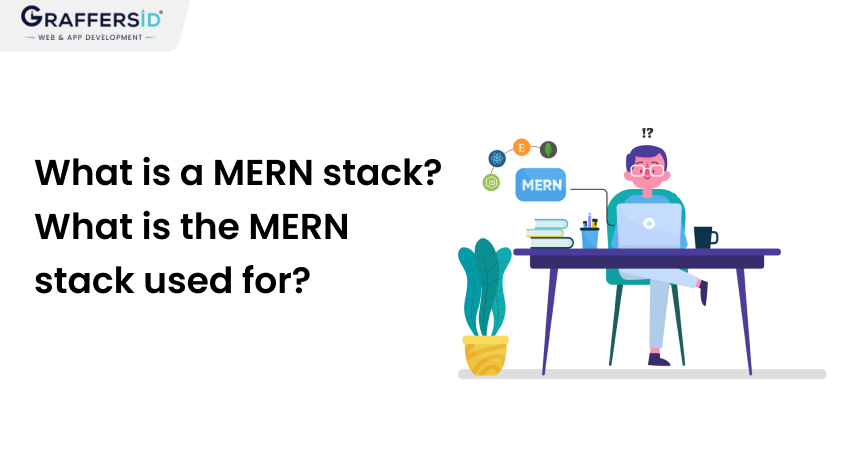 Nowadays, there are a host of technologies that are used to create web applications. It can get difficult to decide which technology to use, especially when there are tons of options. When it comes to technologies, the MERN stack is one of the leading technologies.

According to a hacker rank development report, more than 30% of developers are well versed in React JS, making it more popular than the MEAN stack.

What is MERN Stack?

There are four components in the MERN stack

Each component of MERN plays a specific role that we must comprehend.

It’s a document-based database that’s structured specifically to store data in JSON documents. Furthermore, it has dynamic schemas and you don’t have to rewrite your application for adding new fields.

ExpressJS or Express is a JavaScript-based open-source web application framework for building fast, scalable, and robust web applications. It can be installed in the browser or NodeJS.

It’s a JavaScript library that is extensively used for building User interfaces. It was developed by Facebook.

You may have already used it without realizing it — the Facebook App is built in part with React JS.

It’s a JavaScript runtime environment that excessively enables you to create a wide network of applications. It’s primarily been developed to make event-driven architecture that utilizes non-blocking I/O to develop HTTP servers and to minimize overhead for progressive web applications.

Furthermore, it’s quite similar to Python’s Twisted and Ruby’s event machine. These are scalable networking engines.

MERN Stack: Why should you use it? 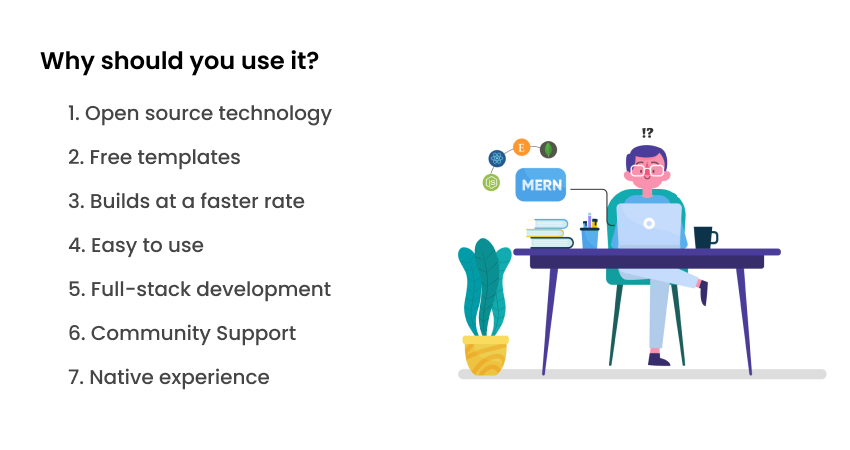 Most startups are more drifted towards the MERN stack as it’s an open-source code that can be leveraged to build robust web applications. It’s been used by most tech giants as its all components are open source.

For instance, angular JS is an open-source framework. It was created to acknowledge some of the loopholes of the previous versions of JavaScript and HTML. In addition, the changes in angular js led to the enhanced coding efficiency and also consists of tools in abundance to help build apps at a faster rate.

Customizing a theme is quite time-consuming as it will consume the almost double time of downloading. However, you can find tons of free templates that end up saving a lot of time.

Also, if you bump into a problem, you can get assistance from experts.

In fact, you can ask questions and get feedback on your code. There will always be experts by your side.

Want to know difference between MEAN stack vs MERN stack

3. Builds at a faster rate

MERN stack is an open-source technology enabling the developers to use it without any restrictions and don’t have to start from scratch.

For instance, if you’re looking forward to building a blogging platform, there will be a higher chance that someone might have already created an in-demand framework similar to WordPress.

You just have to comply with the set-up instructions and then can customize according to the requirements. This kind of plug-and-play approach gives you leverage over big corporations as the larger they are the higher chances to strike with ture and tired solutions.

Know about how to hire ReactJS developers From India

The MERN stack is quite easy to learn and deploy making it highly popular and the perfect choice for beginners who are new to the field of web development.

Often, when the tools are in abundance, it can get a tad difficult to learn and understand each part of development. You will have to dig and dive deeper into the tools to use them effectively. However, this technology is quite easier to use making it far easier to implement.

In addition, if you’re new to web development, it’s highly recommended to kickstart with a MERN stack application as it will be easy to learn and access.

Learn more about React Native vs Xamarin vs Ionic vs Flutter which is better?

MERN stack works best in both front-end and back-end development as it’s full-stack development. It’s based on software engineering principles and UI design.

In fact, the foremost reason behind its high demand and popularity is that it saves money as you don’t have to hire separate frontend and backend developers for web development.

MERN stack is backed by a strong community. All your queries can easily get addressed. It minimizes the development time enabling you to release products at a faster rate with less money.

Furthermore, the insane popularity of NodeJS along with JavaScript makes the MERN stack highly in-demand technology.

Native applications are highly scalable, secure, and robust which creates an interactive user experience. This results in more startups gravitating toward building mobile applications on hybrid frameworks such as react native or Ionic.

These frameworks although kook impressive when it comes to performance they highly lack. However, a mobile application built on the MERN stack won’t disappoint you as it can flawlessly sync data exchange in online and offline states by leveraging some of its native features such as camera access.

Also, it becomes easier to monetize and enables developers to emphasize features that can be of great value to work on. Apparently, it’s not possible in app development used with hybrid technologies.

MERN has some powerful tools such as ReactJS, NodeJS, MongoDB, and Express making it the best combination to use in web development.

In addition, modularity is its most preferable and notable feature by utilizing each component to build something effective that is greater than its parts. Also, modularity enables you to create custom solutions based on your requirements making it a highly adaptable feature.