NextJS: A Detailed Guide ( What, When, Why) 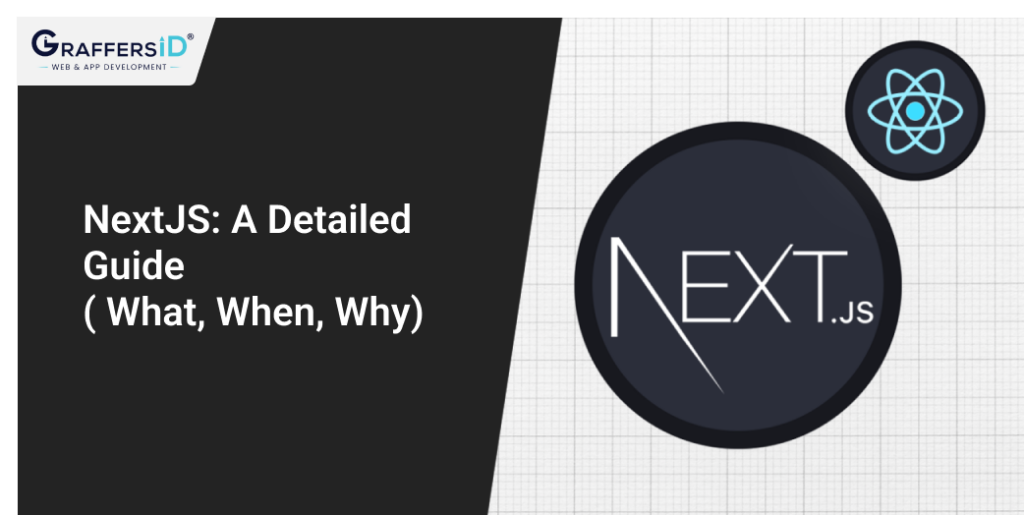 NextJS is also referred to as the “meta-framework” and it’s a framework that is built on React. It was built by Zeit and is a popular tool, often used for server-side rendering and for developing web apps.

Vercel is the company that maintains it, and according to them, more than 6 million downloads were recorded from October 2020 to June 2021, making it one of the top programming languages for web development.

You must be wondering what’s so special about this language or what makes this language one of the top most used languages by companies to develop web apps.

The reason why most companies and developers prefer this language is that it can handle both frontend and backend development of the application, making it a full-stack framework. It is built on React.

Moreover, if you have experience with React or have knowledge about it, then definitely you should know about NextJS.

NextJS has become a popular language and tool in React and is growing tremendously next to React, jQuery, and VueJS and is preferred by most top tech giants and developers.

Now, many of you might be wondering why it is growing so fast and becoming a popular tool. Hence, we decided to break it down for you from scratch to give you a brief overview of everything about NextJS.

Here is a detailed comparison between ReactJS vs AngularJS

NextJS is an open-source framework built on top of React and created for web development and static websites.

Now you don’t have to choose between dynamic and static websites because of automatic static optimization. It’s merged into a hybrid application feature with statistically and server-side rendered pages.

The tool has the power to build amazing website applications for various platforms such as Windows, Mac, and Linux.

NextJS works on top of React and NodeJS to build server-side rendered pages and static web apps. Also, it gives structure to React while introducing a few features of its own.

Here is a detailed comparison between ReactJS and EmberJS

The tool has become a top choice for big companies such as Netflix, Uber, Tiktok, Hulu, and Binance.

The Evolution of NextJS

You would be shocked to know that initially when NextJS was launched in 2016, it only supported service-side rendered apps. Later it evolved and started supporting both frontend and backend development, which were built using both React and Javascript.

Here is difference between UI UX

Initially, it used to provide SSR, but now it has expanded with various rendering methods available:

In SSR, based on every request, the content is generated on the server and then it’s sent to the browser and became severless with update of JS8 .

Let’s say you call a page at/about. Next, JS calls a serverless function that is responsible for returning backend data that is necessary to render the about page. In NextJS, the data fetching or retrieving is done in the getServerSideProps() method.

Pre-rendering is also known as Static Site Generation (SSG) or static rendering, where the page is rendered before the application is deployed, during the initial build, as it’s a part of the CI/CD build process.

This feature was added in next.js3 but was manual. Next comes Js6 routes were automated for both SSG and SSR, and with next.js9, automatic static optimization was introduced, which determines if the page can be rendered as static.

This feature was unique and new to next.js and, later on, was adopted by Nuxt and Gatsby.

It’s also referred to as Incremental Static Regeneration (ISR). It’s similar to SSG, but here the page is rendered when requested by the user.

Here, subsequent users will see the page either when the optional cache time expires or when a new build occurs. The main intent is to reduce the long build time.

Often, large websites face this issue due to the presence of low-trafficked pages.

Want to know how to hire ReactJS developers from India?

Often, developers mix and match these rendering pages. However, it’s not that easy to mix and match without considering how and when to render specific content.

You have to keep a few points in mind when mixing and matching rendering pages, such as If the content of the user is the same for all users, then the deferred and pre-rendering methods are the best.

If the content is user-generated or generated on request, then deferred and SSR work best.

NextJS provides two kinds of pre-rendering services where SSR enables data fetching and rendering when requested, and in static generation, it uses the data that is already available before the request is made or during build time, which is quite useful in cases where data can be pre-rendered for SEO or is publicly cached.

Typescript is a programming language. It’s built on JavaScript, which makes it a popular language. NextJs provides or is coordinated with Typescript just like an IDE. NextJS developers can make a typescript version. They can make it by creating the next application with the typescript-ts flag.

Know the difference between Flutter and React Native

Image optimization means developing, resizing, and creating working configurations such as webP. Also, it can work with any image source and format, and the images can be upgraded regardless of whether the image is facilitated by an external data source. The image component style contains various built-in performance options.

It uses libraries and JavaScript, where instead of creating a single JavaScript consisting of all application codes, it breaks down into smaller segments and serves them when required.

It ensures that your first page is as fast as possible, and the remaining page loads will send the Javascript when expected to the client.

There are various reasons why developers are drifting to Next Js.

In comparison to React and other frameworks, Next JS requires less code. The developers just have to create the page and link to the header, which makes it easy to code, which means less code, better project management, and higher readability.

The speed is quite fast due to SSR and static generation, making the applications built with Next JS fast, thereby providing a better way of handling data. However, the SSR will only be as fast as the server is processing requests. While static generation is quick because it is provided by a CDN,

You can see every change in the file just by refreshing the page as the component is rendered at the very moment, making it easier and faster to analyze the edit as soon as it happens.

If you’re looking to enhance SEO, keywords and titles, then NextJS is best as with SSR your visibility in search engines can be increased, with which you can create web applications consisting of all functionalities and therefore reap all the benefits of SEO.

Also, doing this will help you beat the competition, as most developers underestimate the importance of SEO in development.

Next JS prevents the browser from downloading and executing a large chunk of data at once in Javascript, so it has the potential to enhance the TTFD (time to first draw). TTFD determines how long it takes for a user to view the very first content on their screen, which should ideally be less than a second.

If the TTFD is higher, then it would be highly beneficial to the user as the app will be quicker, which will attract more customers, as waiting for a website to load is always a turn off for customers, which in turn deters them from staying on the page, thereby increasing the bounce rate. It’s another factor in SEO.

Want to know how to hire Offshore developer for startup?

When should you use NextJS?

If you want to increase your conversion rates and sales, boost marketing channels, enhance user experience, lower maintenance costs and improve the performance of your app or website, then it’s highly recommended to use NextJS as it can massively help with SEO, performance and speed of the application.

You can use NextJS if you have an e-commerce platform, streaming service App like Netflix, web portal, or blog. You can analyze the expectations and needs of the client before recommending it.

After analysis, if you find the SSR could be beneficial for the client, then you can definitely go with this without giving it a second thought.

Why should you use NextJS?

1. Next JS is known for its fast refresh rate. It has the ability to load both CSS and Java for any given page. It’s popular for its fast installation when there’s a new project and has a lower dependency size.

2. NextJS also features commerce Shopify integration, allowing you to use any headless ecommerce solution of your choice and has a provider agnostic UI.

Also, as ecommerce is the fastest growing industry, Next JS can be a great option for you. Big companies such as McDonalds, Apple, and Nike use Next JS.

Want to how to build a stock trading app?

3. Next JS comes with great responsiveness and adaptability, as web applications or websites can easily adapt to any resolution or screen size. Hence, users can access web apps or websites with convenience on their own device.

4. Needless to mention, NextJS is SEO efficient, so if you want to enhance the SEO, this would be a great option to go with as it can help you increase the traffic, rank keywords higher, increase the visibility rate, and will therefore help you outperform your competitors.

With NextJS, you can get some outstanding features with zero configuration. It will benefit you in every aspect, be it enhancing SEP performance, image optimization, better user experience, code splitting, and many more.

If you haven’t tried NextJS, then do give it a shot to get all the benefits!

Want to hire remote developers or develop a website or a mobile app, Consult GraffersID.