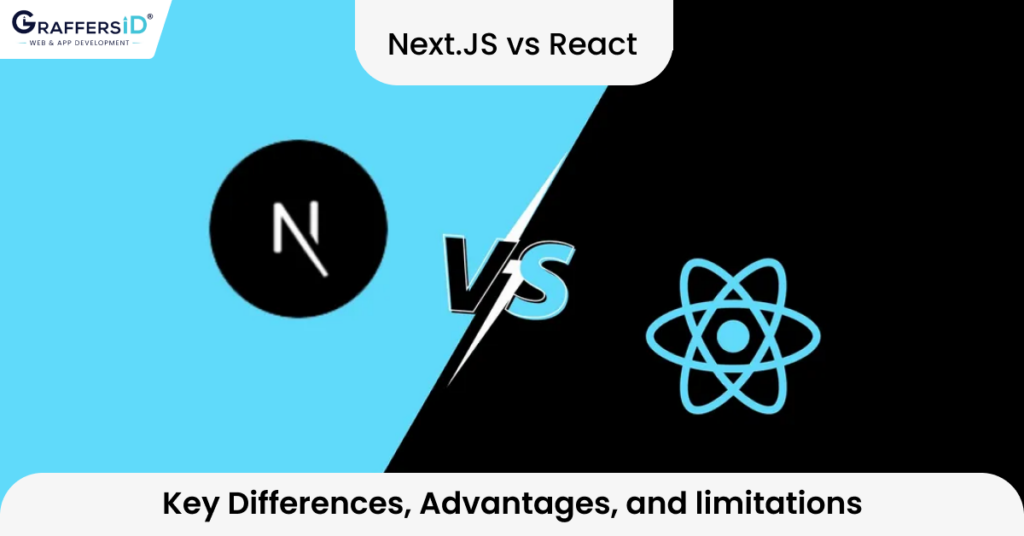 In this article, you will learn the features, benefits, and limitations of NextJS vs React, and which is better for software development.

Selecting between the two best front-end development platforms (NextJS vs React), is a matter of debate. Both tools work best for designing web applications. In case you’re contemplating which one to go for, we have discussed in detail about two most popular front-end programming languages NextJS and React. Let’s check it out!

Both React and Next JS are popular tools used for front-end development. They are often used for developing web applications.

What is React Native?

React is a Javascript language that is used for front-end development. It’s used for building UI and is developed by Facebook. Furthermore, it’s used to build SEO-friendly, dynamic, single-page applications, mobile apps, visualization tools, and dashboards.

Its interactive user interface is designed effortlessly using the components where they receive data and render displays.

Most gigantic tech platforms had used it for their mobile app development such as Facebook, Netflix, BBC, Airbnb, Reddit, etc.

Its main competitors are Vue.js and angular, but it has consistently been the most popular library for front-end development.

React becomes more flexible with the use of additional libraries such as React Native. It enhances the development speed in comparison to other JS frameworks.

The foremost reason why it’s popular among developers is that it is easy to learn and code. 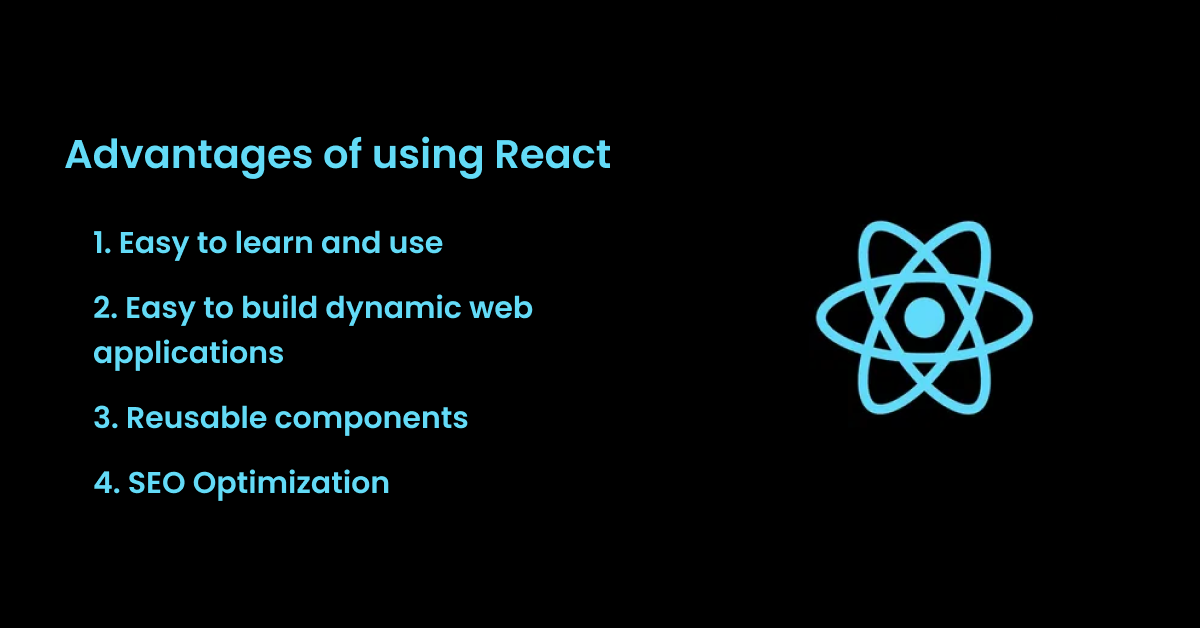 1. Easy to understand and use

It’s quite easy to learn as it comes with a set of tutorials, training resources, and documentation. Also, as it’s built on JavaScript, it makes it easy for developers to get familiar with React if they have JavaScript experience. Developers can build web applications with it in just a few days due to its ease of usability.

Here is difference between ReactJS and AngularJS

React has various components in which each component has its controls and logic. These components are rendered reusable pieces of HTML, which means they can be loaded onto different pages repeatedly without any change in characteristics. You just have to edit the components and the changes will be visible across the pages.

Generally, Javascript frameworks don’t work well with heavy JS applications as they have trouble reading them. Developers have frequently criticized its use, but with React, developers can navigate search engines with ease as React applications run on the server, and virtual DOM renders and returns easily to the browser.

Also, with React you can expand your library by customizing it and adding different tools like Redux.

Its development cycle is quite short making the available documentation outdated very fast. Also, the community has to keep re-learning new skills and tools to ensure quick responses and inquiries.

The constant upgradation in technology is so quick that there’s no time to build and create documentation. Often, Developers face problems, and hence to bear with it they have to write instructions as soon as new tools and releases become available.

Furthermore, you can’t use HTML markup in .js files when compressing or minifying files as its Webpack doesn’t permit it leading to an increase in performance issues.

NextJS is an open-source framework created by Vercel. It’s based on Babel and NodeJS and is designed to work with React. It’s a great framework to build server-side rendering ( SSR ), websites, apps, linting and standardization, HTTP caching, automatic code-splitting, and SEO tools.

In addition, you can use it for creating SEO-friendly websites, landing pages, and e-commerce stores.

It constitutes all tools required to make the web faster and is a web software development kit.

Also, as NextJS is built on the top of React, it helps react to overcome its lack of technical abilities and create server-side static, hybrid apps.

Here is detail difference between Angular vs Flutter

Many platforms have used it, such as Tiktok, Binance, Hulu, Twitch.tv.

NextJS shows two types of pre-rendering. The first is service-side rendering which enables fetching data and rendering at request time while the other is the static generation where data is already available before the request time, so it becomes useful in situations where data isn’t user-specific or is publicly cached.

Also, NextJS supports typescript which becomes one of the prime reasons for its popularity as typescript is a programming language that is built on JavaScript. It also supports Redux.

NextJS version 12 has many updated and latest features such as its rust compiler for better image management, SEO optimized crawlability features and various other operational tools for production-friendly and faster builds.

Most developers are drifted towards NextJS for various reasons:

As mentioned earlier, NextJS shows two types of rendering: SSR and static generation, which makes the applications faster when built with NextJS, as it’s a better and smarter way to handle data.

However, server-side rendering ( SSR ) will be fast until the server is handling requests, while static generation is fast as it’s served from the CDN. Also, its native image optimization feature enhances its performance to a greater extent.

It shows fast rendering, as soon as you make any changes to the file, it will be visible instantly when you refresh the page. Due to its fast rendering, the component can be rendered on the spot, making it much easier to see the edits

It has improved image optimization, which means that the images can be resized and served with formats like WebP.

Also, it has better SEO as you can easily create titles and keywords. You just have to use the featured head component.

NextJS is highly customizable as it uses the plugins such as babel. Also, its deployment is quite easy and it enables it to launch applications quickly.

It’s a file-based router, which means that it’s a file system and uses files to deal with responses and requests. Sometimes these file projects aren’t sufficient for some projects. To create or use the dynamic routes, you need to have NodeJS in hand, which requires proficient developers.

NextJS works best for those developers who are well versed in and have worked with React and are looking for new tools to build applications with enhanced SEO capabilities, high customization, and ease of editing.

Know in detail Deno vs Node: Which is faster?

With NextJS, you can easily build web applications as it has two rendering services: server-side rendering ( SSR ) and static websites, as well as other tools to offer. Also, it’s easy to code, which results in better readability.

It has enhanced image optimization and SEO components. It makes it a lot easier for developers who are new to front-end development to get familiar with NextJS.

However, React stands out in comparison to other alternatives like VueJS and Angular as React’s built on the Javascript framework, which makes it more popular.

React works with the view layer of mobile apps and the web, enabling you to make your UI more attractive and easier.

Is NextJS better than React?

If you’re still confused about which programming language to use for your next project, then it highly depends on the goals and types of projects you’re dealing with.

Both NextJS and React are great for developers. Certainly, NextJS stands out more than React when it comes to performance.

We hope, with these insights, you can find the best software for your next project! Call us to hire the best remote developers from India.