Flutter vs Kotlin: Which to Choose and Why? 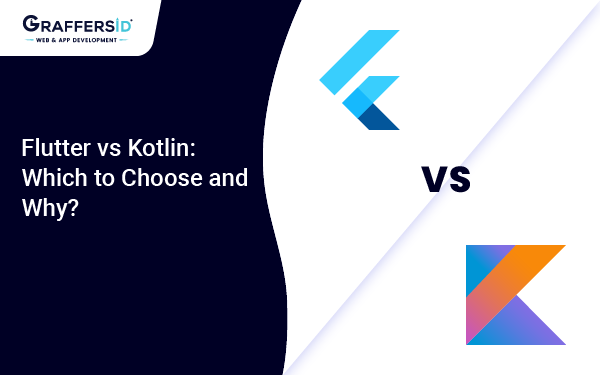 Apps have become an inevitable part of our daily lives. And, the app makers if succeeded to gather the mobile user’s attention then the developers would be busy filling their pockets right now. But have you ever wondered, what makes the app a success? Yes, exactly you are right, the technologies used to build mobile applications. In our blog, we will discuss leading technologies for mobile app development i.e, Flutter vs Kotlin. Flutter, which is a framework, on the other hand, Kotlin is a programing language.

A successful mobile app is one that provide something of value to not only its users but also to its makers. Therefore, you need to hire dedicated kotlin developers or Flutter Developers for your Mobile app.

Now, here comes the plot twist no one saw coming. The app market is dominated by 98% of both android and iOS users comparatively. And, in such a process, the app built should be such that it caters to the broad market of users.

For the same purpose will you follow a cross-platform app development strategy or stick with the traditional method of making both on separate platforms? Before nodding in affirmation on just one option, take a breath and read the question twice.

In recent times, the realm of app development has witnessed a new entrant, Kotlin. And, due to the varied features offered by it, the previous preferences were never the same. There has been a sudden shift where the developers are choosing Kotlin and Flutter.

At the moment you must be wondering which is better among the two. Fret not, because we have all the detailed comparison of both of the technology listed in the context below. Till then keep reading!

Before diving any further into the discussion let’s discuss 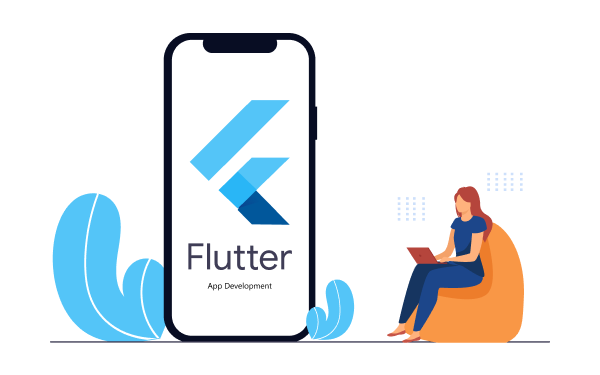 Flutter was introduced in the year 2015. The basic purpose and intent for introducing such technology were to prepare the market for then Google Fuchsia.

Coming back to the topic, Flutter is an open-source that allows its users with the ability to craft and build beautiful mobile, web, and desktop applications using a single code.

The best feature about the Flutter was that it overcame the technological challenges faced by its then competitors and provided a plethora of benefits. And, the same made the Flutter an ideal choice when it comes to being chosen as the cross-platform app development technological stack. Another distinct feature that Flutter possessed was the efficiency of securing apps similar to that of a website.

In no time, it was included in the list which stated that it was the top choice for the brands like- Google, Square, eBay, EMR, and Ali baba group to name a few.  AppBrain conducted a survey that reported Flutter holds the accounts of a total of 0.24 percent of the app market and about 0.07% of the total downloads.

In similar terms, if you are using Flutter as a preferred choice for cross-platform app development, then you will find the following advantages 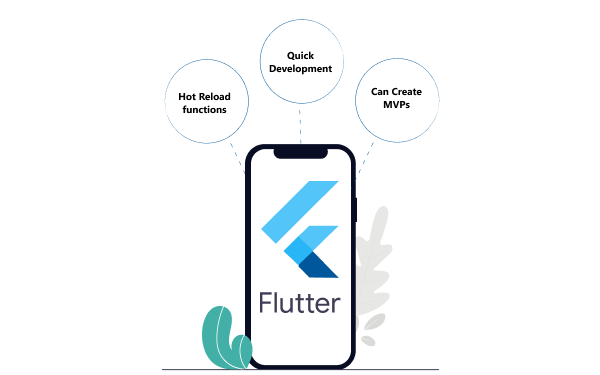 Due to the above-mentioned trait, it is a choice of the major brands. The hot reload functionality allows the users to streamline the back-end as the front-end functions of the app, thus ensuring better decision-making processes in the entire app development.

Who doesn’t want to use a technology that provides them with less stress and more upper hand at fast development? WE DO! So, if you are looking for a cross-platform app development process that requires low cost and fast development then you have the choice!

We have read how useful Flutter is when it comes to developing an app in no time quick and at a low cost. This makes it highly favorable to create MVPs and also a prototype. 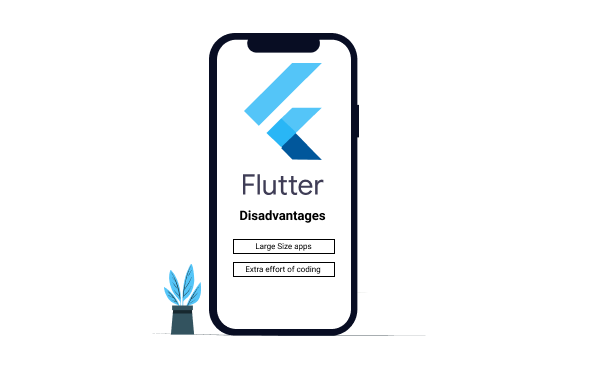 If you are looking to create a flexible sized app, then this is not an option. Flutter is known to create an app where its size is too big. And, at times, it can turn out to be against your case.

2. Extra Effort of the coding

You have to be well-versed in Dart. What you don’t know? Do not worry it is easy to learn. But if you have limited resources ( most importantly time) then this can turn against your favor. 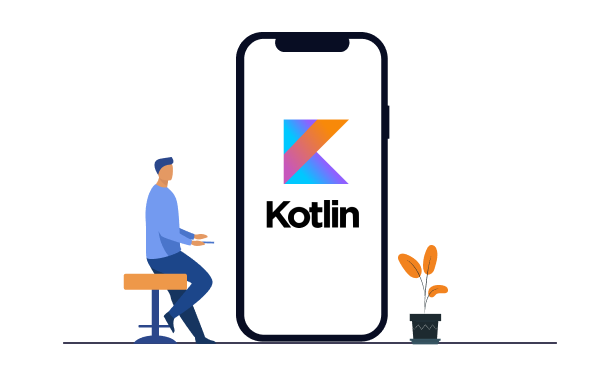 Wait, relax, because we will answer your every question. So give the hyper curiosity of your mind a rest and keep reading. Kotlin is the new age programming language that was built by JetBrains. He is the maker of the renowned & best IDE’s.

Do you know what makes this language best? It was made not for academia but for developers. Kotlin is a general-purpose and open-source programming language. It can be considered as a pragmatic platform for Andriod and Java Virtual Machine.

It was initially released in 2010 as a small-scale project but later it was introduced on a high note in 2016. AppBrains found out in a study that, there were over 82,000 which are currently using Kotlin. And, talking about the total app percentage it accounts for 9.93% of apps and more than 22.36% of downloads.

The big and popular giants such as Microsoft, Huawei Video Player, Samsung uses it as their preferred choice. 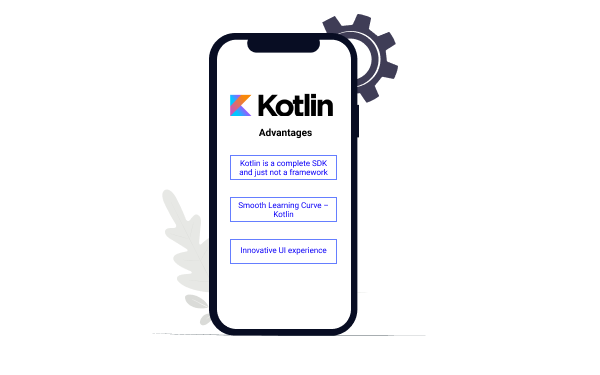 1. Kotlin is a complete SDK and just not a framework –

The above sentence clearly states that you don’t have to shift your entire app on a platform.

Kotlin possesses its similarity to Java, Scala as well as Swift. It is indeed easy to learn the language and provides its users with less struggle when designing a cross-platform app.

It is one of the best features of using Kotlin for app development. When you are using Kotlin it provides no challenges to their developers and hence, they can design accordingly with liberty depending upon the behavior, performance as well as functionality of the app-in making.

Read Also: Flutter vs Swift: Which is Better for iOS App Development? 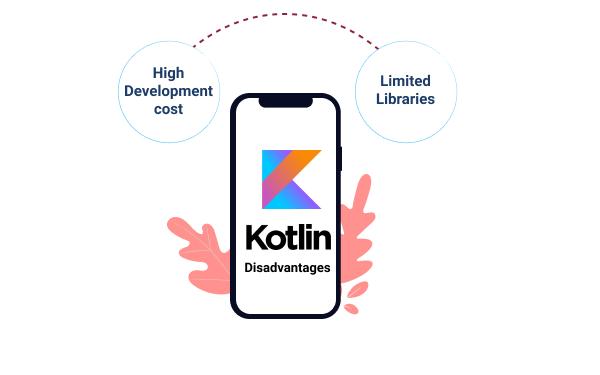 It is free to use the app, and now you may argue how come the cost of the development is sky-high? The answer to the same is quite simple. It offers its users semi-native functionalities. And, hence the entire development process to create such an app can hit hard on the pockets.

The platform is not in the active stage rather it is in the developing stage. It means the users may have access to the limited availability of the libraries.

But, who won our vote?

Wait, we have more comparative arguments to take your attention on.

1. Popularity – Both Flutter and Kotlin is a widely used open-source network that provides free access to its users. Flutter today is gaining more popularity than Kotlin and it is because of the GitHub presence of the former is depicted as 69.5K stars as well as 8.11 forks. And the Kotlin enjoys 28.3 K stars as well as 3.29k forks.  In this category, Flutter has undoubtedly won its masses votes.

2. Learning Curve –  Kotlin has its similarities to Java, and thus, it is quite easy to get accustomed to. But when it comes to Kotlin Multiplatform and that of Flutter the scenario is quite different.

Speaking about the Kotlin Multiplatform it is an entirely new platform and having less resources available.  Therefore, after having a glance, the Flutter has won our votes when it comes to the learning curve.

3. Cost of Development – Having a value-based idea of the app is one thing but when it comes to creating an app, cost matters. Of course, you might have certain budget restraints and in this regard, Flutter wins our vote.  It is because as discussed before flutter has a low cost of development as compared to Kotlin.

4. Performance – Kotlin offers its users a plethora of advantages such as high-speed animation, the same language for both high and back-end needs, and a lot more.  But when we compare it with Flutter, it surely lags. Flutter is known for its hot reload functionality, thus, making it users to change easily and accordingly.

Want to Develop Mobile App Using Kotlin or Flutter? Get a Quote

Both of the cross platforms are reliable and provide the feature to reduce the overall time. And, due to their unique advantages both of them are giving a huge competition to each other.

At times, the choice and preference may depend upon the app type and the functionalities you wish to add. In such scenarios, you may need to find the right company that can guide you through a process of smooth and unique offshore app development solutions.