React Native vs Xamarin vs Ionic vs Flutter: Which is better? 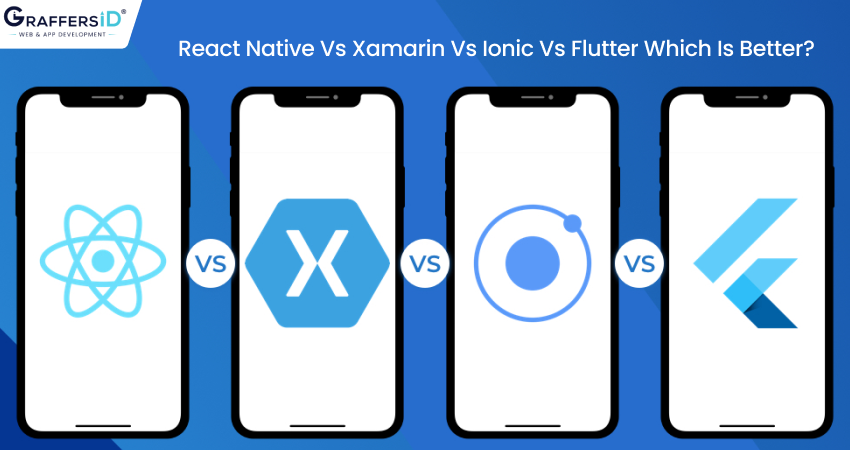 So you confused about choosing the right frameworks i.e. React Native vs Xamarin vs Ionic vs Flutter for the development of your cross platform app? Don’t worry, GraffersID is here to resolve all your queries and help you select the best. For that you need to check out detailed blog. Don’t miss it.

Generally, when developing a mobile application, you decide the platform on which you want to launch the app, which can be either Android or iOS. IOS apps are developed using Objective-C and Swift, while Java is used for Android apps. On the other hand, developers are using React Native, Xamarin, Flutter for developing cross platform apps.

Before launching the app, the developer develops the app with the aim of having a high performance quotient. The process of developing the app becomes time-consuming and costly as the same code has to be written twice.

However, with cross-platform mobile app development, the developer just has to write one piece of code, which can work on both Android and iOS. It ends up saving time. But, the catch is that apps built on cross-platforms generally don’t perform well. They lack higher performance than native apps.

To resolve the issue, many expert developers use certain tools such as React Native, Xamarin, Ionic, and Flutter, which can enhance the performance of the app.

You might be wondering if all of these tools work best for cross-platform, then which would work best amongst them all? Don’t worry. In this article, we’ll dive into the comparison of all these tools i.e. React Native vs Xamarin vs Ionic vs Flutter.

We’ll also look at which one qualifies to be the best cross-platform framework for building mobile applications by determining the characteristics of the tools.

React Native vs Xamarin vs Ionic vs Flutter: Key Comparison 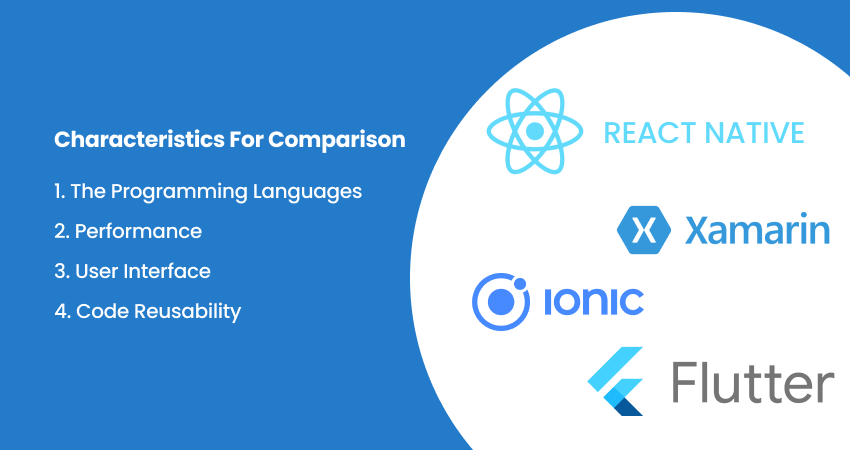 Before determining the best tools for the development of cross-platform mobile applications, let’s understand the characteristics on which we will compare these four tools:

Let’s look at the languages and their benefits used by these four tools:

It allows the developer to write components or modules in Objective-C, Java, and Swift. With the help of libraries and native modules, you can handle heavy operations such as video processing and image editing.

Also, you can handle unconventional operations that are not included in the framework API. Your team should have the basic idea of these platforms to build modules and connect them to JavaScript.

2. Ionic:  The Ionic framework uses JavaScript, CSS, and HTML5 and requires a Cordova wrapper to use the native platform controllers. The Ionic core is based on AngularJS, which is a popular JavaScript framework and is written in SaaS.

The main language of Ionic is TypeScript, which is a syntactical subset of JavaScript. Typescript helps to identify and eliminate mistakes, which improves the quality of the code.

3. Xamarin: Xamarin uses programming C# and .NET to develop mac, Android and iOS applications. With C #, a developer can achieve anything using Xamarin and C #.

Generally, developers can’t use native open-source libraries for IOS and Android. However, they can use.net libraries to bridge the gap and meet such requirements.

Know the difference between ReactJS and AngularJS

Performance is a crucial factor to consider when building mobile applications. It shows how apps will perform when different frameworks are used.

1. React Native: Its app performance is quite similar to other native apps as it uses the elements of the code which are for the React Native API. In fact, React Native enables developers to use native modules when they want to script code for complex operations.

If you want to hire dedicated React JS developers for your project, Consult GraffersID, a leading IT staff augmentation company.

Since the native modules are scripted in native languages, it makes it easier and more accessible for developers. These native modules provide high performance. However, the drawback is that it cannot be utilized on other platforms.

2. Xamarin: Xamarin’s performance is quite similar to native performance. You can develop mobile applications in two ways with Xamarin, Xamarin.forms, Xamarin.android, and Xamarin.IOS.

The applications were developed with xamarin.android and xamarin.ios work similarly to native apps, and the cross-platform functionality of the apps is based on business logic rather than codebases. Also, you get high performance as native apps.

While xamarin.forms are focused on broad code sharing, It’s less platform-specific, which reduces the performance of the code when compared to pure native and Xamarin native.

3. Ionic: Ionic doesn’t offer similar performance to native apps. Although it doesn’t use native components, its appearance is quite similar to native apps, which are done through web technologies. The silver lining of using Ionic is that the app testing happens rapidly, which streamlines and makes it stand out in the process of app development.

4. Flutters: Undeniably, Flutters tops all of the other apps in performance. It offers great speed as it uses darts.

Want to know Django vs NodeJS: Which Is Better?

The user interface should be engaging and simple to grab the attention of the users.

While in Xamarin.forms, it consumes less time and the development process becomes easier. However, the development might not look similar to native apps. This development is generally used by corporate ventures where UI isn’t given much priority.

3. Ionic: Ionic develops UI using CSS and HTML and doesn’t use its native elements. In fact, it uses Cordova to get a native look. At present, Ionic has a new native UI layout and elements that weren’t there before. They are only available on Android and IOS with a native SDK.

4. Flutter-Flutter aces the UI amongst them all. In comparison with react native, both flutter and react native have great efficiency and high performance.

Here is a comparison between Golang vs NodeJS

Code reusability gives you an idea of how you can reuse the existing code for both platforms.

1. React Native:  ReactNative uses native components in Swift, Objection-C, and Java to enhance the app’s performance. Generally, ninety percent of these components can be reused on other platforms, and the rest of the native components in the codebase have to be accepted. The developers have to change a specific codebase.

2. Xamarin: In Xamarin, ninety-six percent of the source code with xamarin.form can be reused. In fact, it enhances and speeds up the development process.

3. Ionic: Generally, Ionic works well on every OS platform. However, some components have to be changed according to the platforms, for which you have to put in extra effort.

4. Flutter: In React Native, there’s an always ready-to-use function which enhances the speed of development. While in flutter, you need to add dedicated files on both the Android and iOS platforms, which depend on the rules.

Generally, these frameworks are used to minimize the cost and time required for app development. Each framework has its own merits and demerits.

Choosing the best framework amongst them highly depends on your app requirements.