MERN Stack vs Django: Which is Better? 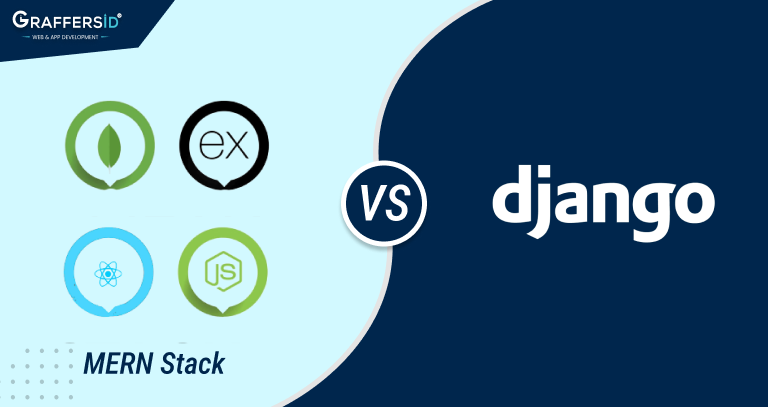 Nowadays, the most significant user interfaces enhance the user experience and boost traffic to the most widely used websites and online services. If the improper web development stack is chosen for your project, it could influence the scalability and security and lead to the development of your application. We’ll ramble on now and come back to this subject of MERN Stack vs. Django later.

If you want to give your business or organization a mobile presence, one of the first concerns that will come to mind is whether to create a mobile website, a user-downloadable app or perhaps even both. The optimal selection for your purposes will rely on several things, such as your target audiences, your budget, the applications you plan to use it for, and the features you need. Apps and mobile websites may, at first glance, look highly similar. But how do you build web applications or websites?

Let’s get into detail to know about MERN Stack vs Django platforms to develop websites and applications. 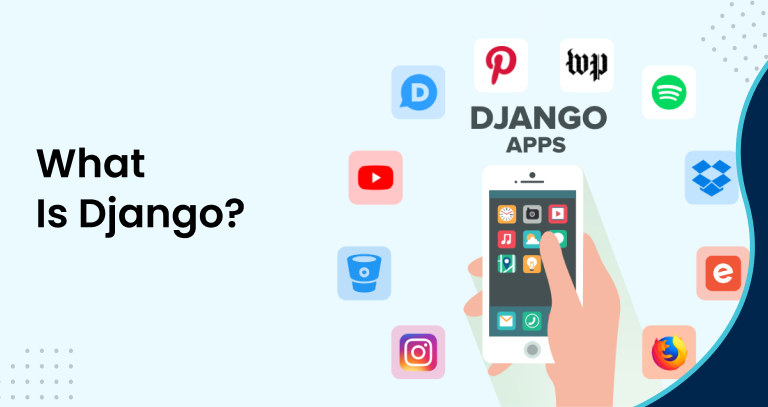 Django is a free and open-source web application framework. Django was created in Python; hence Python serves as the framework on which it is built. The architecture of your website or app is built using Django. A web framework is a group of components that facilitates websites’ quick and easy creation.

When creating a website, a similar collection of components is typically needed: a means for managing user authentication (signing up, in, and signing out), a management panel for your website, forms, a method for uploading files, etc.

For your advantage, it has long been known that web designers face identical challenges while building a new website. As a result, they worked together to develop frameworks, including Django, that provide you access to pre-made components.

Frameworks are available to help you avoid starting from scratch and cut down on some costs associated with developing a new website. 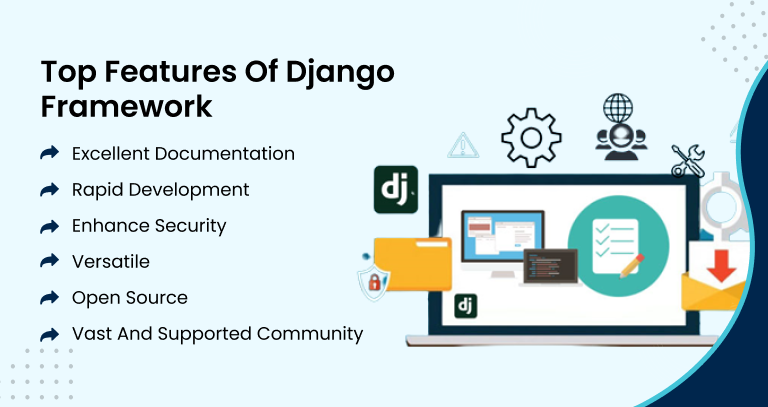 One of the main reasons for starting Django instruction is documentation availability. Django offers the most comprehensive documentation compared to other open-source software.

When it comes to any technology, better documentation is comparable to a very well-established library for any developer. There, he can quickly find whatever function he desires by simply investing time in looking.

Documentation is one of the categories used to evaluate technologies since it enables developers other than the original creators to utilize the technology efficiently.

Since Django first became open source in 2005 and up until the present, it has consistently had the most significant documentation. It is also available in various languages, and the documentation has only improved with active technological development.

Django was developed to create a framework enabling programmers to make online applications quickly. Django expedites the procedure, which takes a while during the project implementation phase.

Django offers Security bolstered by its user base’s extensive knowledge and expertise and stated security measures. A security flaw could be unintentionally added to your module if you build your entire web application from scratch. You can have more faith in the Security of Django packages because they are widely used, open-source, and well-reviewed by web developers.

Django is a flexible framework that may be applied to developing apps across numerous industries. Businesses now use Django to create a wide range of applications, including platforms for scientific computing, social networking sites, and content management systems.

Django is a framework for free and open-source web applications. It is free and accessible to everyone. It is possible to obtain the source code from the public repository. The overall cost of creating an application is reduced by using open source.

A large and dedicated user community of great Django developers contribute their time and knowledge to build, improve, and patch the software foundation. By utilizing the thoughtful packages freely available to everyone building with Django, your application can profit from this commitment.

Read Also: Django vs NodeJS: Which Is Better?


Why should you use the Django framework?

Hence, by knowing the difference between Django and MERN, one can develop apps and websites of their own choice.

What is a MERN Stack? 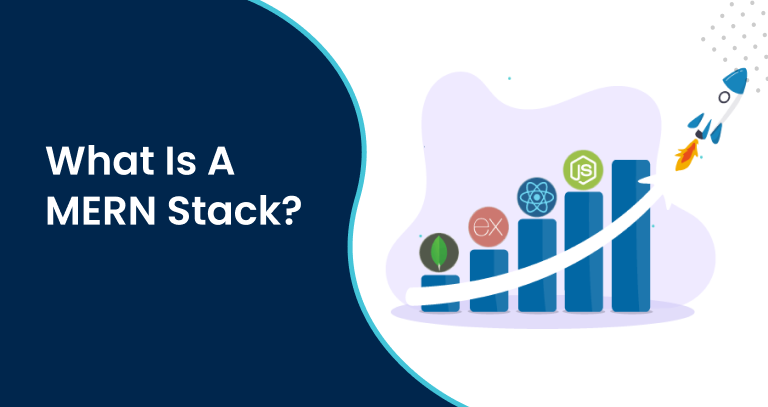 MERN stands for MongoDB, Express, React, and Node. It consists of a collection of technologies that accelerate the development of applications. There are thousands of developers using it around the world. MERN is primarily designed to facilitate JavaScript-only application development. The four JS-based components that make up the technological stack are responsible for this. As a result, if you know JavaScript, the backend, frontend, and database may become pretty easy to control. Four technologies make up the MERN Stack, collaborating to create dynamic websites and web applications.
< 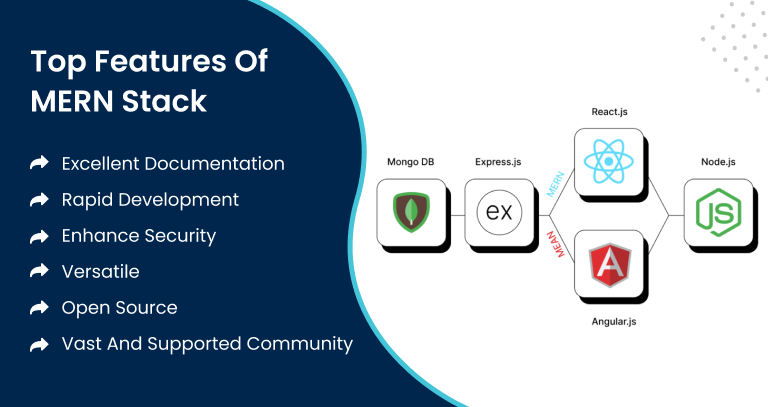 The components of a web application developed with MERN technology can be changed and reused. As a result, code from one project can be applied to others. The quickest turnaround for your product is ensured by this reusable component authorized for usage in production.

The backbone of all open-source platforms, including Shopify and WordPress, is made up of old LAMP languages like PHP. On the other hand, the Node.js capabilities, which are a part of the MERN stack, enable the asynchronous administration of several jobs. Programs can better handle complex scenarios and data-driven applications as a result. Thus, the application’s overall speed and performance are increased.

There is no risk that scalability will be compromised because the content is regularly posted to all the platforms. MERN stack includes the Node.js framework for maximizing processing power and MongoDB, a NoSQL database that works incredibly well with cloud storage. As a result, the platforms’ collected data may be conveniently controlled from anywhere in the world.

The LAMP architecture based on PHP mainly uses backend code and offers a static user experience due to the significant amount of HTML content and server-side scripting. Conversely, the MERN stack’s Model View Controller (MVC) approach allows unlimited platform frontend customization. Instead of managing the material through backend panels, you can change your user interface to give your users a unique user experience.

It can connect all MERN stack apps to reliable hosting companies. By doing this, cyber-attacks are avoided, and data security is maintained.

An essential element of this tech stack is its real-time operation, which enables notifications, updates, etc., to be made without waiting for the website to refresh. This is helpful, especially for social media or e-commerce apps.

The app is displayed at the top of the results page when relative terms are searched, just because of SEO, which ranks pages on Google. Data like page metadata that promotes SEO and raises the app’s exposure is present in the MERN stack, which loads very quickly.

Looking to hire remote MERN developers? Get in touch with us here!

Why Should You Use MERN Stack?

Here are a few reasons why MERN Stack is an excellent option for developers:

Django is the way to go if you want to quickly and easily build a beautiful website. Django is, in my opinion, the best web framework for use with applications like blogs, newsletters, and others.

People typically refer to it as the web framework with batteries for user authentication, models, emails, testing, and a tonne of other stuff. I could construct fully functional websites using Django in just a few days. The best option is Django if speed is your sole concern.

If you want to create a detailed website that functions like a social network app, all you need is a beautiful community website like the one you are reading this article on in MERN.

Hence, we have learned many things about MERN Stack vs. Django for developing mobile apps and websites.

Want to hire? Get in touch with us here!